Making payments is the inevitable consequence of making purchases and an essential and integral part of the financial supply chain. A payment is the transfer of value from one party, a person or company, to another, normally in exchange for the provision of goods, services or both, or to fulfil a legal obligation.

The simplest and oldest form of payment system is barter, the exchange of one good or service for another. The other two types are: cash - notes or coins, and transfer of value systems which move value between accounts (not always a bank accounts) either paper based or electronic systems.

There are three processes in any payment system: 1) initiating the payment by giving the instruction to the bank, e.g. submitting a cheque, 2) clearing: the process of transmitting, reconciling and, in some cases, confirming transfer orders prior to settlement, and 3) settlement: the completion of a transaction or of processing with the aim of discharging participants' obligations through the transfer of funds and/or securities.

Business Transactions
A payment is an integral part of a business transaction. There are two types: 1) the purchase at a point of sale where the goods/services are paid for 'immediately', and 2) billed transactions where the goods and services have been ordered and received, and invoiced, before the payment is made. In both payments at POS and billed / invoiced transactions, the majority of the costs are before and after the actual payment, as the estimates in figure below shows. 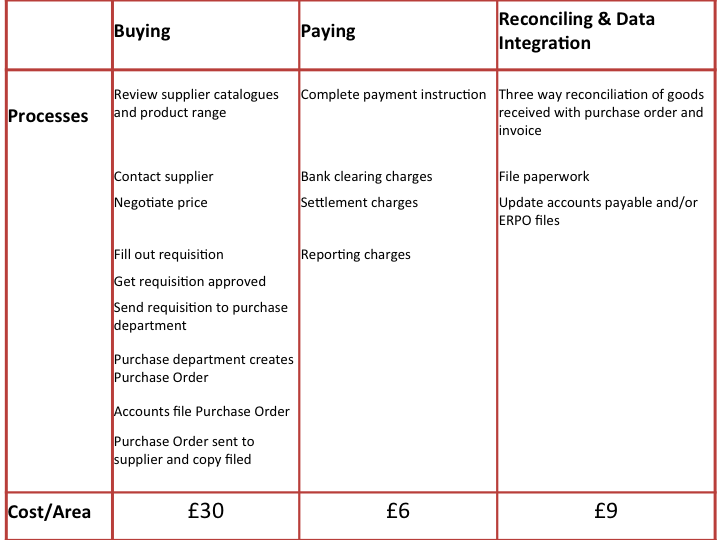 Types of Payment
There are basically two types of payment: urgent and non-urgent payments that are either made domestically or cross-border. The very large majority of payments are domestic, even in eurozone only 3-4% are cross-border. An indication of the types and relative volumes of payments is given below.

Types and Relative Volumes of Payments 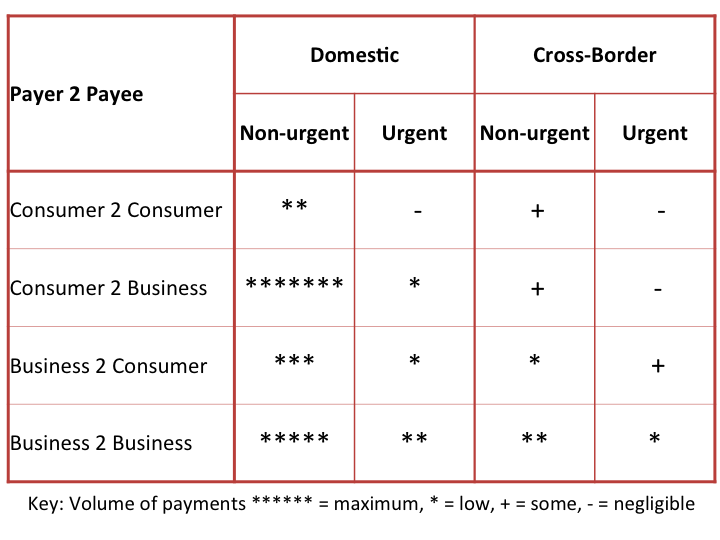 Types of Payment Systems
There are three types of payment system - cash, paper based systems and automated systems as shown in figure below. 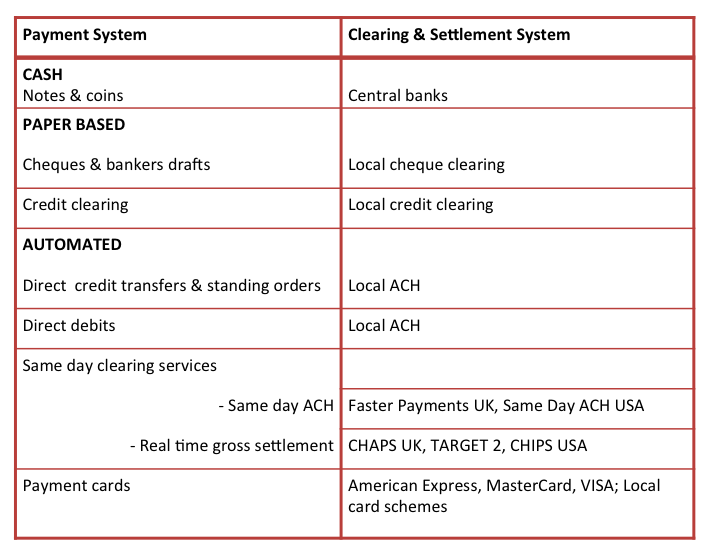 Clearing and settlement systems are either four or three-party. In four-party systems there are a buyer and their bank, and the supplier and their bank with clearing and settlement between the two banks. In three-party payment systems, the bank or account holding institution holds the accounts of both the seller and the buyer, with just account transfers between the buyer and seller.

Payment Initiation
Payments in the automated clearing and settlement systems are initiated by instructions sent from many different devices, e.g. payment cards, PCs, mobile phones, mainframe computers. The instructions can be sent on telecommunication networks, on the SWIFT network, on the Internet and on the mobile phone networks.

One of the ways payment systems compete for transactions is to accept instructions from as many devices and networks as possible, e.g. some ACHs are now accepting payments initiated on a mobile phone.

Usage of Payment Systems
In 2009, the Bank of International Settlement's review of non-cash payment system usage in the 20 leading economies, which is only published a year late, showed the massive impact of the liquidity crisis with the number of transactions declining from 216 trillion in 2008 to 127 trillion. The survey also showed the continuing world-wide decline in the use of cheques (- 6%), and other paper based clearing systems. The use of direct debiting grew rapidly, by 19%, and is predicted to overtake the use of credit transfers in 2010.

Payment cards remain the most popular non-cash payment method. Although there was a 50% decline in payment card usage from 2008 to 2009, reports from MasterCard and VISA indicate that in 2010 usage levels went straight back up to 2008 levels. Debit cards are by far the most widely used payment card in the world, even exceeding cheque payments even in the USA in 2010 for the first time.

Cheque payments are proving difficult to eliminate altogether. The UK Payments Council, which announced in 2010 a target date of 2018 for ending payments by cheque in the UK, found that they could not come up with alternative solutions that consumer groups, SMEs and politicians would accept. In July 2011 the council announced that cheques 'will continue as long as customers need them' and that the possible closure of the cheque clearing in 2018 was cancelled.

All posts in this section