At long last Brexit is now the first concern, with need for greater security falling to second place.

The main findings were that:

The study found that the impact of fraud had decreased, however, 41% of companies still remain unsure as to whether they’ve been hit by fraud.

Not only this, recovering stolen money is a significant problem. Of those impacted, most were unable to calculate how much they had lost. The most common answer (at 27%) was between £10,000 and £50,000. 9% lost between a quarter of a million and a million pounds. While 2% had lost over a million pounds.

Cyberfraud is still the biggest concern, but concern about exploitation of internal payment processes and internal staff by outsiders is also an increasing concern for financial decision makers. The study found that over half of internal frauds were committed by trusted senior managers.

Bottomline are concerned that the study revealed that over one in four businesses have no structured processes, and are possibly doing nothing to manage compliance: 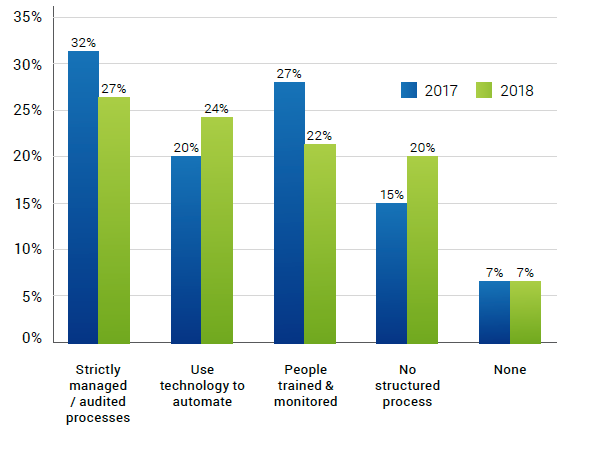 And tersely commenting that those not attempting to be compliant, “Will certainly not be exempt from fines imposed for non-compliance.”

CTMfile take: A useful check on how payment processing is progressing, and sadly how little the benefits of paying on time are really understood.

Faster Payments revolution is UK is being driven by the SMEs. Finance Director: ‘We’ll never use che

Cyberfraud - it will be your fault. Protect yourself