The company plans to invest in both the cryptocurrencies behind the projects and in company equity. Andreessen's first crypto-focused fund was launched four years ago during a recession now known as "crypto winter."

Arianna Simpson, General Partner, Andreessen Horowitz, commented that bear markets bring about the best opportunities, allowing investors to focus on building technology rather than being distracted by short-term pricing activity.  Simpson and her partner, Chris Dixon, compare the long-term opportunities for cryptocurrencies with the next great computing cycle following personal computers in the 1980s, the internet in the 1990s, and mobile computing in the early 2000s.

Andreessen Horowitz, known for its early bets on Lyft, Pinterest and Slack, made the first major crypto investment in Coinbase in 2013. Subsequently, reports indicate that Andreessen Horowitz has helped various start-ups in the cryptocurrency and NFT spaces, including Alchemy, Avalanche, Dapper Labs, OpenSea, Solana and Yuga Labs. Additionally, the company invested in Flowcarbon, a carbon credit trading platform on blockchain, earlier this week.

While cryptocurrencies struggle to regain momentum, funds flowing into private companies appear to be the highest ever. Blockchain start-ups raised a record $25 billion in venture capital in 2021, eight times higher than in 2020, according to recent data from CB Insights. The succession of investments in so-called "Web3" start-ups that seek to build their business on top of blockchain technology has reportedly increased significantly.

Mastercard is focused on expanding digital payment solutions in the Middle East and Africa by partnering with payment fintech Sokin to help their cross-border payment products launch across the region. Sokin is said to offer its customers a multi-currency payment app and an accompanying debit card for a fixed monthly fee (dependent on the country of residence). According to the reports, these tools give users the ability to make unlimited international money transfers and transactions. As part of this multi-year partnership, Sokin expects to leverage Mastercard's digital banking and card services to expand its own cards and app across 39 markets in the Middle East and Africa.

Investment research firm, Zack, stated that Mastercard also formed alliances with issuer processor, i2c, and digital payments provider, One Global, to issue mobile wallets. The partnerships will provide banks, fintechs and merchants access to a wide range of financial tools for building digital payment solutions for consumers in the Middle East and Africa. Mastercard's Fintech Express program, which includes card and mobile wallet issuing tools, is said to enable these providers to enter the market quickly and more efficiently.

Digital payments are gaining momentum in the Middle East and Africa as cash usage declines (shown in Table 1 below by Insider Intelligence). According to financial technology firm FIS, cash payments in 2021 fell sharply by 16.3% year-on-year (YoY) in the Middle East and Africa, despite having the highest cash penetration rates in any part of the world. Also, between 2021 and 2025, the percentage of POS payments made in cash is expected to decrease by 42% YoY. 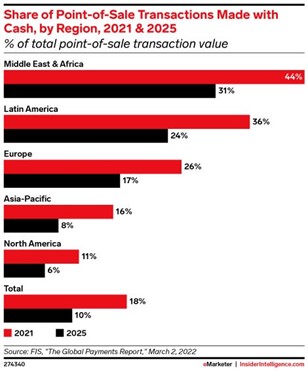 One of the major advantages stated in the report is that Mastercard can leverage the connection between the card and mobile wallet to build a stronger foothold as digitalization progresses in the Middle East and Africa. As more consumers enter the banking ecosystem, cards may have a longer-term growth path. However, due to the proliferation of mobile money accounts and the mobile phone growth, mobile wallets have the potential to achieve strong growth in the short term.

In addition, Insider Intelligence forecasts that the Middle East and Africa will see the fastest growth in mobile payment penetration in 2022 (approximately +12.9% YoY).

Road to automated, real-time treasury for corporates via Deutsche Bank and FinLync

A recent study by the Association of Corporate Treasurers, which is affiliated with Deutsche Bank, shows that the benefits of API-enabled benefits, such as improving the accuracy of cash forecasts and increasing automation, are noted as the top priorities among treasurers (Table 1). However, many companies are concerned about the complexity of API integration across multiple banks, regions and entities.

This partnership is said to demonstrate Deutsche Bank's commitment to developing APIs for banks and fostering efficient and strategic actions. Both parties are expected to innovate Deutsche Bank's pre-integrated API suite, expanding additional use cases such as eBAM and applications for payee account validation. 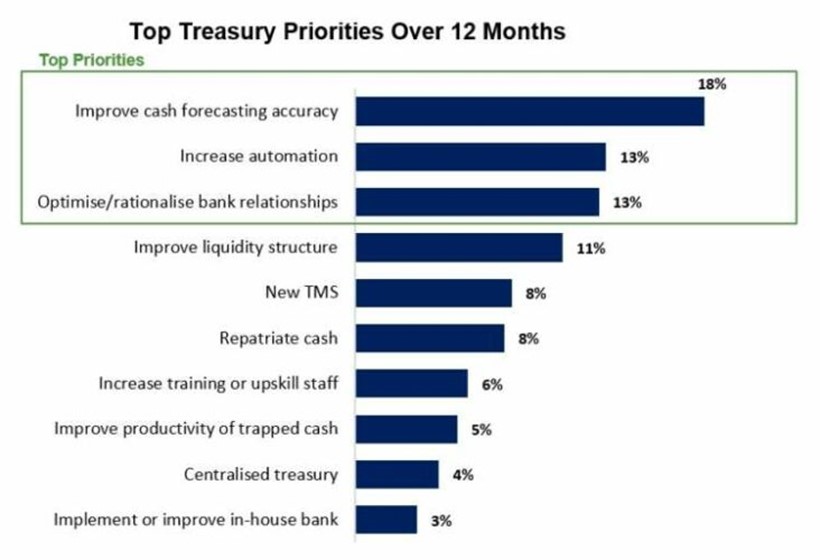 Source: International Treasury Benchmarking Survey by the Association of Corporate Treasurers in partnership with Deutsche Bank.

Stripe, a global payment processor, has announced a partnership with Bitcoin payment infrastructure company, OpenNode, to enable companies to convert fiat payments into Bitcoin. In addition, Stripe simultaneously announced the launch of its app marketplace enabling custom user interfaces to integrate with Stripe’s global client base.

The OpenNode app on Stripe's app marketplace will allow users to convert fiat payments to Bitcoin in real time. Additionally, enterprises should be able to set an automatic amount of payments to be converted to Bitcoin, or manually convert amounts. Reports also indicate that companies can view their Bitcoin wallet and conversion rates at a glance in the app, with the ability to connect directly with their bank accounts. The automatic conversion from fiat to Bitcoin is done through the app’s split-payment feature guiding businesses through the initialization process.

The Stripe App Marketplace launch is said to give companies such as OpenNode the ability to streamline workflows and build user interfaces for customers to enable data synchronization compatibility between Stripe and its participating partners.

Stripe's open API is expected to enable developers to build apps that will support Stripe integrations. The company states that Stripe apps does not currently offer billing for apps. However, application billing is said to be fairly easy for companies looking to build on Stripe. Additionally, apps can be created as free or paid, but companies looking to launch the service are said to handle their billing outside of the marketplace.

Sweden pushes ahead towards immediate payments, completing the first phase of TIPS

Sveriges Riksbank, the Central Bank of Sweden, reportedly completed the initial phase of the transition to TARGET Instant Payment Settlement (TIPS), a pan-European service for immediate processing of electronic payments offered by the Euro system to banks and payment service providers, operating on a 24/7/365 basis. As mentioned in the announcement, this paves the way for immediate processing of payments in Swedish kronor in TIPS.

The first phase established a connection between Sweden's Real Time Gross Payment System (RTGS) RIX and Euro System TIPS. Additionally, the link is said to be a prerequisite for funding and defunding the accounts of future Swedish participants in TIPS.

In the second phase, the Swedish market is expected to test the TIPS platform to prepare for final migration in the first quarter of 2023. Reports indicate that TIPS currently only settles payments in euro. However, it was designed and developed to allow settlement in central bank money in many currencies. Sveriges Riksbank is said to be the first non-euro area central bank to join the TIPS platform with its currency, leveraging this feature.

The Norwegian and Danish central banks have indicated interest in connecting TIPS to their respective national currencies in efforts to provide their communities with instant payment settlement with central bank funds.

The service is said to use central bank money to make it possible to transfer money between individuals and businesses in seconds, regardless of the business hours of the local bank. The Eurosystem, which consists of the European Central Bank and the central banks of member states whose currency is the euro, is the monetary authority of the euro area.

Cryptocurrencies pose a risk to financial stability – Industry roundup: 25 May