Trade policies are a major source of concern for global corporate executives. Here are five take-aways from the results of McKinsey's Economic Conditions Snapshot survey 2018.

Global executives expect the US to play a pivotal role in how global economic growth develops in the coming year – most of the survey's respondents said that America will provide the biggest growth opportunities in the next year. This is despite US interest-rate and trade policies, which have caused concern among companies worldwide.

Overall, positivity regarding the global economy has declined since December – in the world's richest country more than others. Despite the policies of the Trump administration towards bolstering the US economy through protectionist policies and one-off tax incentives for repatriating cash to the US, executives in the North America region retain a very cautious outlook to their region's economic prospects. However, uncertainty around the future of the NAFTA may also be causing a bearish outlook among business executives in the region. The survey found that respondents in North America are the most likely to expect a decline in domestic growth, as a third from that region expect their home economies to contract in the next six months.

More executives worldwide now expect trade to decline, especially in North America and Asia-Pacific, possibly reflecting the tensions created as the US and China announce tariffs on imports. Respondents from these regions have more cautious expectations for trade than they did throughout 2017 and nearly 60 per cent respondents in North America now expect trade levels to decrease, as do 42 per cent in Asia-Pacific.

Changes to trade policies, domestic political conflicts, geopolitical instability and rising interest rates all feature highly on the risk radar of corporate executives, according to McKinsey's global survey. As McKinsey's graphic shows, changes in trade policy are perceived as a potential risk to economic growth in North America in the next 12 months. 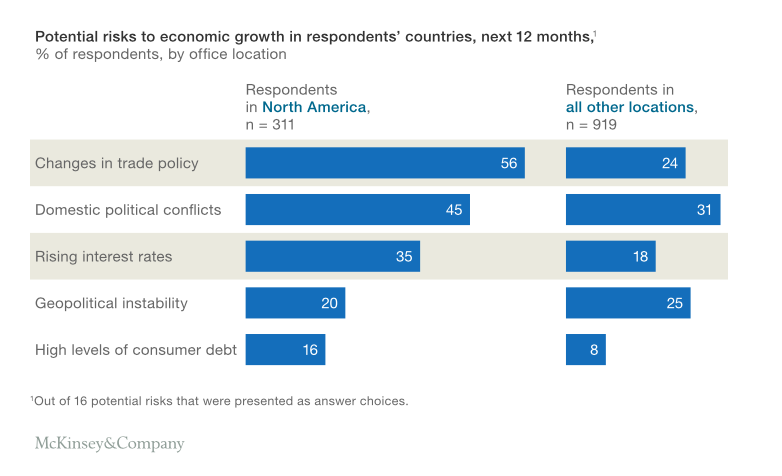 Be ready for a career change from corporate treasury?