It noted that this is the third quarter in a row where fewer than 30 per cent or more of the North American corporates surveyed reported a negative impact to earnings from currency volatility. However, the company notes that fewer companies reported during Q4 2016, making it difficult to establish an accurate picture of the amount of currency losses corporates are actually facing.

The data suggests that European corporates may be suffering greater effects from currency headwinds, with the average negative currency impact at $101.2 million, while the impact for North American corporates was almost half that, at $56.7 million.

The FireApps report notes that Q4 of last year had considerable currency volatility and that these results don't necessarily show the whole picture due to “ the number of companies that appear to have not reported material impacts”.

And the top five most volatile currencies as weighted by GDP %

Pound is most impactful currency

The report also found that the British pound was the #1 currency that companies in North America said was impactful on them. Sterling held this position for the second, third and fourth quarters of 2016. The report stated: “North American companies reported the Pound slightly more often relative to the euro as particularly impactful relative to other currencies, showing a decline in the recent trend. However, it still remains clear that significant impacts came from a range of currencies— highlighting the importance (and complexity) of managing currency risk against the entire portfolio of exposure currencies.” 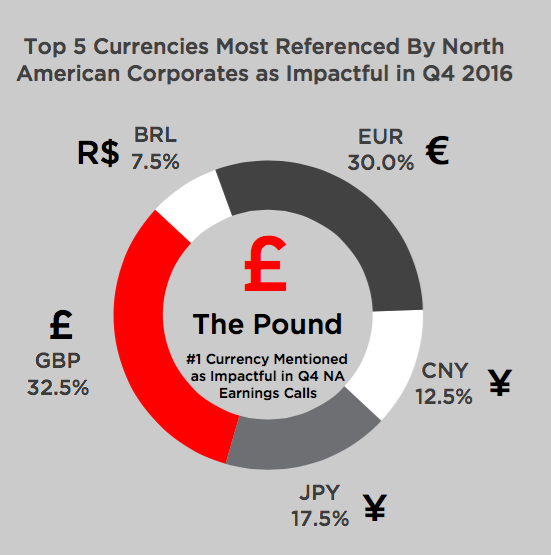 CTMfile take: After about two years of exceptional currency volatility, this report suggests that FX markets could becoming smoother – but the fact that fewer companies reported during Q4 2016 makes it difficult to draw any firm conclusions.

3 things to get right to improve your FX risk management

The 5 ‘don’ts’ of FX risk management