Bank spending on regulatory technology (regtech), including AI and blockchain, will see a seven-fold increase in the next five years, rising from $10.6 billion in 2017, to $76.3 billion in 2022. The report from Juniper Research found that regtech spending as a percentage of regulatory spending by financial institutions, will increase rom 4.8 per cent in 2017 to 34.4 per cent by 2022, as banks seek to avoid costly regulatory fines.

This issue is also important for corporate treasurers, who are seeking to ease the burden of increasing compliance requirements. Technology that eases the compliance process can reduce the time spent on compliance but, as the report shows, considerable spending is needed to invest in regtech. The report also noted regtech vendors will stand to benefit as banks seek greater efficiencies in meeting compliance requirements. This will also meet cuts to jobs in the financial sector. Juniper's report estimated that a bank such as Citi has up to 30,000 compliance staff, and there is “huge potential” to reduce this number. For example, a 50 per cent reduction in compliance staff could save a large bank as much as $1.2 billion a year, based on average wages.

The research also found that AI automation of KYC (know your customer) checks will reduce time required by 90 per cent, generating time savings of 5.4 million hours annually by 2022.

Some of the common regulatory requirements facing financial institutions and corporates include:

The report also provided data on the biggest regulatory fines imposed in the US since the 2008 financial crisis, as shown in Juniper's table below: 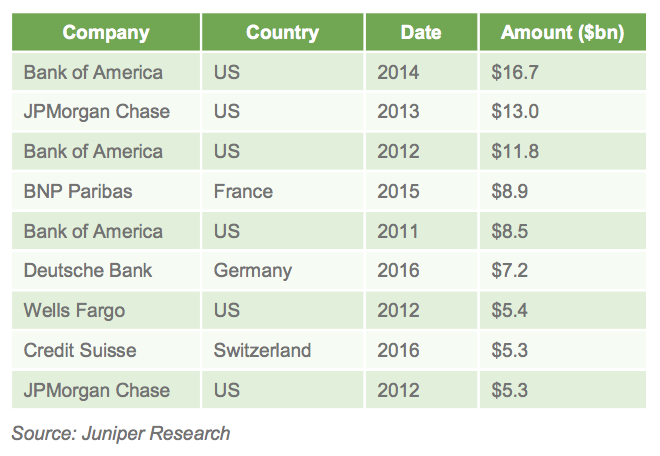 For more info on this subject, Juniper Research has published this white paper: How Regtech Can Save Banks Billions

This item appears in the following sections:
Operations
Control & Compliance in Operations

What are the 3 disruptive financial technologies to watch in 2017?