The new treasury system architecture is shown below: 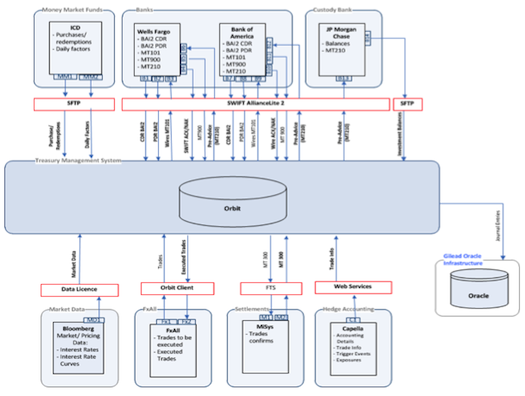 Improving the corporate treasury department's connectivity with their banks and financial institutions was vital. GSI wanted to move to a bank agnostic solution and realised that SWIFT was the obvious solution, and they chose to adopt their Alliance Lite 2 solution because it eliminated another party between them and SWIFT. Brad, explains, "Given our small staff, we wanted to keep our infrastructure as simple and orderly as possible.  We saw SWIFTAlliance Lite 2 as the way to do this and thus giving us one throat to choke."

Implementation of SWIFT Alliance Lite 2 only took three weeks from mid-September to the first week in October.  It is used to connect to GSI's 115 bank accounts at their three main banks - BofA Merrill, J.P. Morgan and Wells Fargo. Throughout each business day, GSI treasury receives BAI2 reports (via File Act) and sends treasury payments using MT 101 and 103 messages. (GSI also uses MT 210s and MT 900s as well as ACK/NCK.)

Future plans
Over the next 18 months, GSI Treasury, plan to set up their remaining 14 banks (with approximately one account/bank) on SWIFT. And in the longer term, Brad will be examining, "How the new bank plumbing can be leveraged by other areas within Finance, e.g. Accounts Payable, etc."

This is an important example of why, even large corporates, are adopting SWIFT Alliance Lite 2 as their full SWIFT connection - industrial-strength systems, avoiding another party (a service bureau) in the loop, and many of them don't need the additional services service bureau provides, even though, there may be slightly higher SWIFT charges. SWIFT Alliance Lite 2 is not just for backup and is emerging as a major competitor for the dedicated SWIFT service bureaux.