The Bill & Melinda Gates Foundation foundation commissioned pollster Gallup to carry out face-to-face interviews with 1000 adults in each of 11 sub-Saharan countries: Botswana, Congo, Kenya, Mali, Nigeria, Rwanda, Sierra Leone, South Africa, Uganda, the United Republic of Tanzania, and Zambia. Their research provides vital clues as to the future of making and collecting payments to/from consumers and SMEs in the region.

Market potential
There are 252 million adults (older than 14 years) in the sub-Saharan region, some 53% (the equivalent of 134 million people) reported that they had paid, or been paid by, a counterparty in a different part of the country within the previous 30 days. The majority of those sending or receiving money and 31% of the total (79 million) still only use informal cash, sending it by bus or travelling friends, or simply carrying it themselves.

Sub-Saharan Africans are far less likely to have used only electronic payments such as bank transfers, mobile phone transactions or Western Union-style services: only nine per cent (roughly 22.7 million) say they made their payments this way. Around 33 million (13%) use a combination of electronic and cash while 47% (118.4 million adults) make no payments of any kind.

There are large difference in payment behaviour between where people live, and that even people on very low income do make electronic payments:

The survey revealed a general domination of the use of cash for sending domestic remittances and also large variances by country: 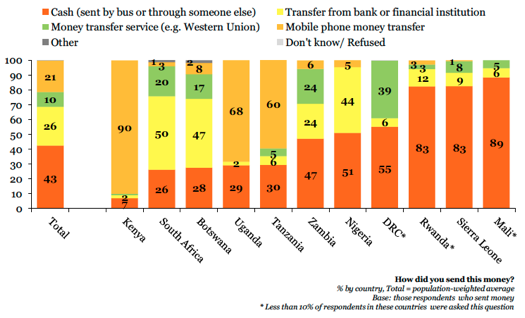 Mobiles and Mobile Money
55% of adults in the survey own a mobile phone and another 22% say that they could borrow one. Already the survey reveals that mobile money is particularly popular with the rural and poor populations. Adults from rural areas and villages who sent domestic remittances 30 days prior to the survey were more likely to have sent this money via mobile phone transfer (28%) than those living in urban areas (13%). Remittance senders living on less than $2 a day were about as likely to have used mobile phone money transfers as those living on more than $2 a day (21% vs. 23%).

Mobiles and mobile money are key to the future of payment systems in the region. The survey shows that all types of people - rich and poor, uneducated and educated, rural or urbanized - already use mobiles and mobile money. The sub-Saharan region is not unique, if you want to make or collect payments from consumers and SMEs in the developing world your company will need multi-channel payment and collection systems and services which must incorporate mobile.