Mobile and digital wallet payments are gaining ground over more traditional payment methods in Asia-Pacific e-commerce, according to a report by data and analytics company GlobalData.

APAC ahead of West on payment adoption

The market will grow from $1.6 trillion in 2018 to $2.3 trillion in 2022, according to GlobalData's forecast, based on its Consumer Payments Insight Survey. The report also shows that alternative payments grew from 49 per cent, in Q1 2017, to 51 per cent of the total e-commerce transaction value in APAC in Q1 2018. The remainder of payment methods in 2018 were: payment cards, bank transfers, and cash/cheques accounted, which accounted for 28 per cent, 15 per cent, and 6 per cent respectively.

GlobalData's Ravi Sharma commented: “Adoption of alternative payments in the APAC region has occurred well ahead of that in the West. Asia’s card infrastructure and payment behaviour are not well entrenched and therefore alternative payment tools offer a welcome substitute to cash. Rising smartphone penetration coupled with a large unbanked population has also turned the region into a potential growth market for alternative payments.”

Alipay leads the way in China

As GlobalData's graphic, below, shows, China is the main driver of uptake of mobile and digital wallet payments, such as Alipay, while Indian consumers prefer card payments. In China, alternative payment solutions accounted for 53 per cent of the total e-commerce transaction value in Q1 2018. The most popular tools in China are Alipay (41 per cent share of the e-commerce market) and WeChat Pay (7.1 per cent). GlobalData's report adds that Tencent, which owns the Tenpay brand, introduced WeChat Pay to leverage the popularity of its social media app WeChat, which has a huge customer base of around one billion.

The e-commerce market in India, on the other hand, has been influenced by the government's demonetization initiative in November 2016, which displaced cash and led to the increased use of alternative e-payments in 2017. In 2018, the cash supply was restored to normal levels and the central bank also introduced stricter regulation on KYC procedures for digital wallet users. These factors meant that use of alternative payments dropped in 2018.

As for Australia, the report also states that alternative payment tools accounted for nearly one-third of the total e-commerce transaction value in Q1 2018, with PayPal being the preferred solution with a share of 15.9 per cent. 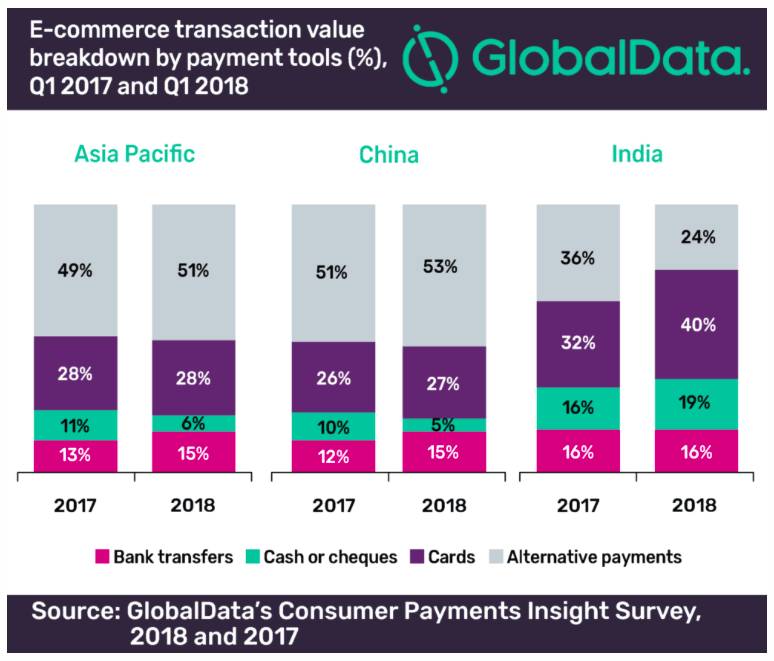 A third of companies not insured for data breaches

100 days of GDPR: complaints double and firms slow to comply