Global supply chains are under an unprecedented rate of attack from criminal groups, according to research from the BSI – the British Standards Institution – which found that supply chain disruption and its associated costs caused by terrorist groups is now at its highest rate ever. The report – Terrorist Threats to International Trade and the Supply Chain – said that attacks include theft of cargo, hijacking, smuggling, extortion, disrupting infrastructure and even kidnapping. These types of attack disrupt cross-border transport of goods, cost corporates enormous sums of money and cause them reputational damage. Attacks are also being seen in a wider range of industries and modes of transport than in previous years.

The BSI's analysis found that, over the past 10 years, an average of 3.1 attacks have occurred each week in 58 countries. In 2016 a total of 346 attacks took place. But the BSI warns that the problem – and cost to international firms – is set to increase, as terrorist attacks are on the rise. Some of the worst-hit countries include Colombia, India and Turkey. This infographic from the BSI shows where there is some of the highest risk of attacks occurring. 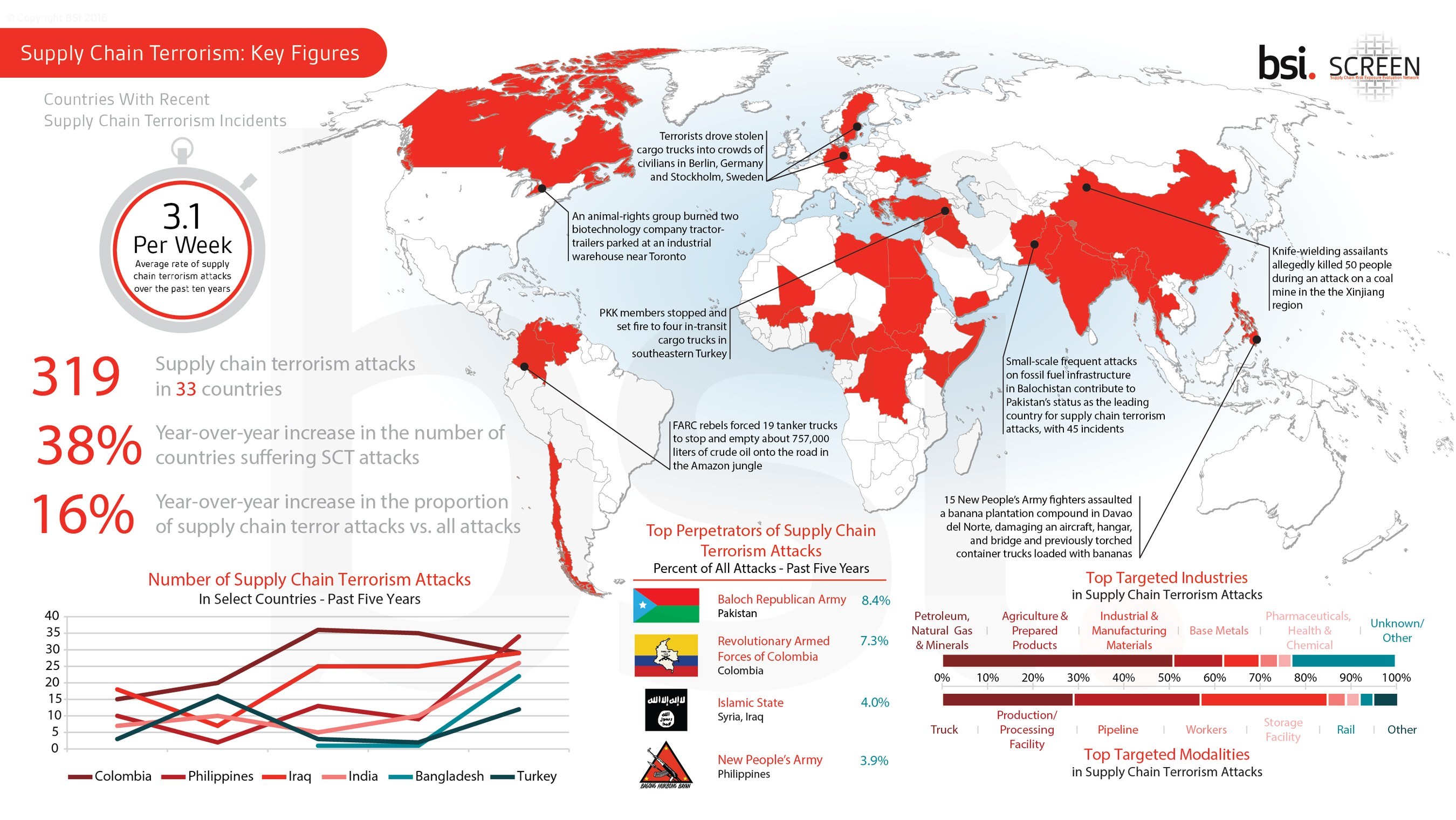 From Syria to Paris, the cost of terrorism on global supply chains

The costs of terrorist-related activity can be direct or indirect and include increased security measures such as insurance costs or checks, which can slow down freight movements. Some examples included in the BSI report of how companies and their revenues are affected by global terrorism include:

Are you spending enough on supply chain security?

However, for corporates one of the most important findings in the BSI study was that there is still inadequate spending on supply chain security, where growth in shipping volumes, for example in air cargo in India and Bangladesh, is not matched with corresponding investment in maintaining security in the supply chain.

The BSI's Jim Yarbrough explains that commercial enterprises, rather than governments only, are increasingly threatened and directly targeted by terrorist organisations all over the world. He said: “Corporations must take notice and prepare their organisations accordingly. We know that industry leaders are implementing stronger supply chain security measures and ensuring that their business partners and international suppliers are fully vetted and armed with the information and knowledge that will protect their business.”