From the “great resignation” that began in early 2021 to the mass layoffs that started in 2022 and continue, employees have experienced a wave of emotions regardless of whether they separated from their organizations voluntarily, involuntary, or not at all. The positive and negative emotions of the waves include relief, optimism, reflection, reimagination, disbelief, anxiety, anger, worthlessness, survivor guilt, sadness, mistrust and fear.

These are trying times for treasurers as well, as there is enormous churn in the treasury jobs market. In fact, according to the Business of Treasury 2022 report, “over half of the FTSE20 non-financial corporates have seen a change of group treasurer in the past 18 months.”

This rise in employee churn is a cause of concern because it can lead to lost productivity and talent, high new recruitment and training costs, and decreased morale among remaining employees or team members.

Now a new data-backed research study by the workforce analytics company Visier suggests that resignations and layoffs are more likely to result in pushing the remaining co-workers (those who have been able to keep their jobs) out of the organization’s door. Treasury professionals should beware and pay attention to the findings of this study because resignations and layoffs can be contagious.

“To find out if a resignation by one employee indeed triggers additional resignations by other employees, we conducted an experiment with tens of millions of actual employee records of people who worked in 86 organizations with more than 1,000 employees across all geographies,” stated the Visier Insights Report Turnover Contagion Is Real.

“We observed two separate groups of employees (which we define as “On the Team” and “Not on the Team”) over a time period of February 2019 to June 2022, and tracked if an initial resignation by an employee would lead to more, earlier, and more frequent subsequent resignations by their teammates under the same manager (On the Team)”, the study noted. 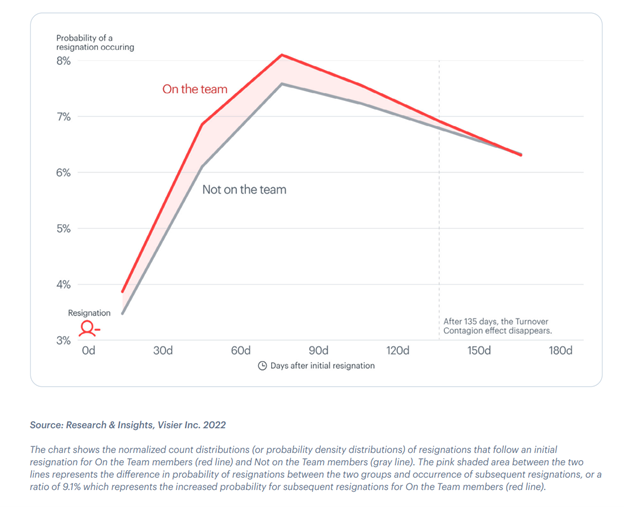 Explaining the difference in behaviours and probability of resignations between peers On the Team and Not on the Team in terms of earlier, more, and faster resignations, the Visier Insights Report findings revealed that “When a resignation occurs, employees on that team are 9.1% more likely to leave within the next 135 days than employees who are not on that team.” 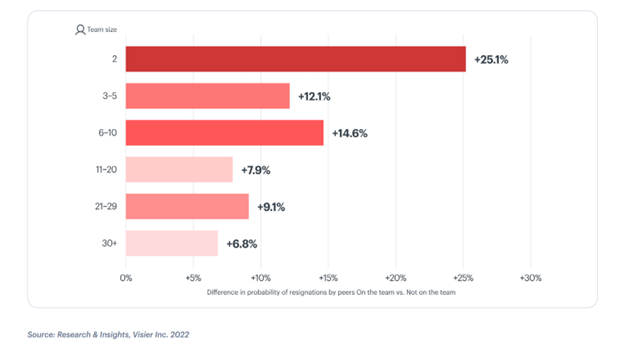 Smaller teams seem to experience higher resignations because of turnover contagion than larger teams, “with the difference between On the team and Not on the Team groups in the effect being 25.1% in teams of two, 12.1% in teams of three to five, and 14.6% in teams of six to ten team members”, the report further added.

Given that the average corporate treasury team is small in size, we advise them to heed the findings from the Visier research data. As the study says, “smaller, more interconnected teams might perform better but the risk of turnover contagion also increases.”

Visier’s research suggests that turnover contagion also exists for layoffs or terminations. When employees are asked to leave involuntarily, “The likelihood of their team members resigning increases by 7.7% (lower than the 9.1% likelihood after a first resignation)”, as was mentioned in Visier’s findings related to layoffs in a recent LinkedIn post.

On the other hand, Visier’s LinkedIn post confirmed that “Terminations seem to speed up the resignation contagion effect on peers: People resigned within 105 days of their peer’s termination, with the peak of resignations happening at 75 days. (For resignations this was 135 days and 70 days respectively).”

Employee resignations and layoffs are not isolated occurrences, but happen within a team, group or organizational setting of peers and colleagues. How corporations and their treasury departments handle resignations and firings can have a major impact on their future success.

Leading through resignations and layoffs with clarity and transparency, and treating departing employees with respect and empathy, as well as supporting remaining employees are all important.

The Visier findings explain “Why many organizations overshoot when it comes to adjusting their headcount. They do not account for the additional losses, triggered by the contagion effect and end up short-staffed.”

Corporate treasurers can leverage this data-based assessment to recognize and mitigate the risk of turnover contagion. In addition, they can use the study to understand a variety of employee resignation attributes and pre-quitting behaviours to prevent voluntary turnover and strengthen social ties among team members.