A global pandemic, the biggest war in Europe since World War II, and stringent lockdowns in the “world’s factory” (China) have fueled growing calls for “deglobalization” and “self-sufficiency”.

Just as globalization refers to the growth of interconnectedness and interdependency of the world economy in terms of cross-border trades of goods and services, human migration, and movement of capital and integration of financial markets, deglobalization is the retreat from global economic integration.

This reversal of global economic interconnectedness means a reconfiguration of global production, in which companies that sent manufacturing activities offshore (overseas) bring production back home or to the corporation’s original country (reshoring or onshoring).

The possibility of throwing globalization into reverse is a growing concern for corporations, particularly those that have complex multinational supply chains. Short of critical raw material, organizations in western economies can’t afford to be locked out of certain resource-producing or natural resource-rich markets.

Globalization in retreat since 2008

A key measure of globalization – the global share of trade to GDP – peaked in 2008 at the start of the Great Recession, and since then this measure has been flat or down, according to the World Bank. 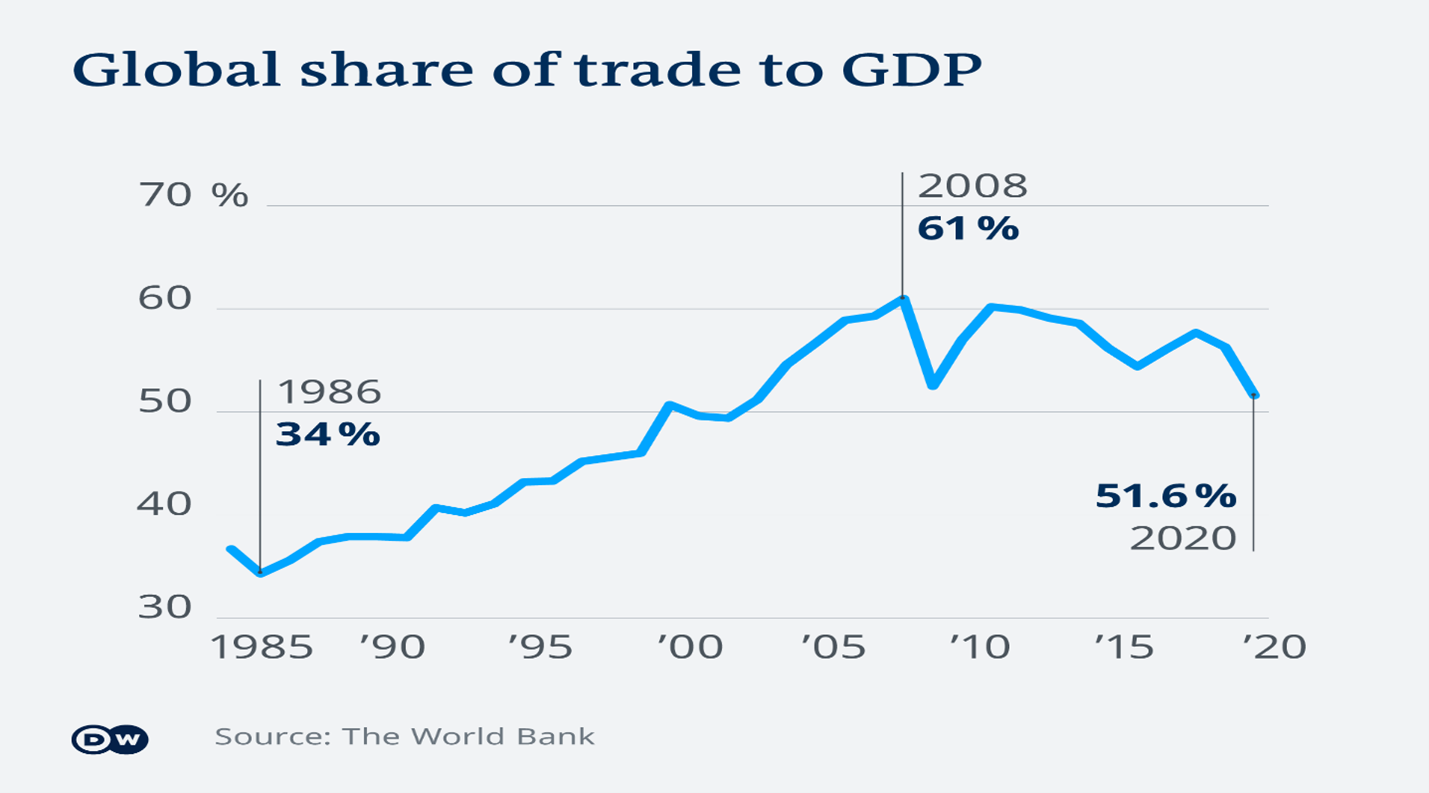 Populism, isolationism and protectionist economic policies have weaponized anxieties over globalization. However, there are three other major factors that have added momentum to the deglobalization chant.

The COVID-19 pandemic and the supply chain disruptions

The pandemic disrupted nearly every aspect of the global supply chain, from raw material sourcing to end customer. The auto, aviation and aerospace industries’ supply chains were among the hardest hit.

A modern car system can have anywhere between 2,000 and 3,000 chips. According to AutoForecast Solutions, the global shortage in semiconductor chips slowed down the pace of vehicle production by 10 million units in 2021, with an additional 1 million at risk this year. This global chip shortage made cars more expensive.

The supply chain bottlenecks adversely impacted the availability, movement, storage, flow and price of a panoply of goods, contributing to significant and widespread shortages and a spike in corporate logistics and shipping costs.

The pandemic exposed the cracks in our economic interdependency and the vulnerabilities in global supply chains. Resilience became the new buzzword. Auto manufacturers, instead of relying on just-in-time manufacturing to keep the production process flowing, started stockpiling key parts or materials. As per EuroFinance, Ford, General Motors (GM), BMW, Volkswagen, Daimler and Tesla held inventory of $129.5 billion at the end of the second quarter of 2021, $13 billion higher than at the start of the year.

Other industries followed suit and started building up costly inventory as a backup plan so that they are not left in the lurch should the supply chain crisis worsen again.

The effects of the Russian invasion of Ukraine

The Russia-Ukraine war has passed the 3-month mark and has exacerbated supply and demand imbalances, prompted a humanitarian crisis and darkened the outlook for the global economy. It caused a surge in energy and food prices that has fanned the flames of global inflation, created volatility in financial markets, and further disrupted the already stretched supply chains.

Europe relies on imported natural gas from Russia to help heat its millions of homes, generate electricity and power factories. Russia is the world’s largest wheat exporter, while Ukraine is referred to as “the breadbasket of Europe”. With Ukrainian ports closed because of the armed conflict and Russian grain deals on hold because of economic sanctions, 16 million tons of maize and 13.5 million tons of wheat from last year’s harvest in Russia and Ukraine are stuck, as per a recent report published by the United Nations World Food Programme.

From oil to copper and wheat to nickel, reduced supplies of commodities have resulted in a spike in oil, gas, wheat, mineral and metal prices. With two of the world’s top crop producers at war, we are at the brink of a full-blown global food crisis.

With the West imposing severe economic sanctions and stringent export controls, including banning Russia from SWIFT in an attempt to isolate Russia from the rest of the world, some experts believe that Russia’s invasion of Ukraine will reverse globalization.

In March 2022, Larry Fink, the CEO of the world’s biggest asset manager, BlackRock, wrote in his annual letter to shareholders, “The Russian invasion of Ukraine has put an end to the globalization we have experienced over the last three decades.”

This disintegration of interlinked and interdependent commodity markets because of the Ukraine war and Russia’s current status as a global economic pariah has also triggered more conversation on the need for economic decoupling and deglobalization.

The trend to move toward closer or shorter supply chains has been gaining ground thanks to being less prone to trade and geopolitical disruptions and coming with lower freight and insurance costs. Now China’s stringent lockdowns are forcing corporations to rethink global supply chains even further.

In addition, the China-U.S. trade war and climate-related disruptions are other important factors for Western companies considering reducing their dependency on China – as a market and as a supplier.

In the pursuit of “self-sufficiency”, some corporations in the automotive industry are working with chip makers to simplify and shrink their supply chains to either within their borders or their surrounding regions. Some of this will include bringing parts of their supply chain closer to home, as well as reducing dependence on single suppliers. For instance, BMW signed an agreement with Munich-based microchip maker INOVA Semiconductors and U.S.-based foundry GlobalFoundries to supply the carmaker with several million semiconductor chips each year. Ford and GM have also aligned with U.S.-based semiconductor manufacturers to develop and manufacture chips.

After decades of globalization, reshoring (bringing manufacturing or production back home) and nearshoring (bringing manufacturing or production closer to home) of critical goods, such as semiconductors (crucial for cars, electronics and appliances) and medical equipment, are being advocated for by some corporations to strengthen their domestic supply chains, reduce reliance on foreign supply chains, minimize exposure to fluctuating exchange rates and unstable currencies, and to increase economic self-reliance.

Strict lockdowns in China have battered its supply chains, and it is unlikely to get back to any form of normalcy soon. By the time it does return to the pre-pandemic output, the global supply chain will appear different, as corporations are bringing manufacturing closer to home. These are cogent reasons to shift toward reshoring and nearshoring, and proponents of supply chain alternatives to China believe the lockdowns will acceleration some level of deglobalization.

Is it the end of globalization? What are the scenarios that are likely to emerge?

It may seem that the supply chain restructuring because of the pandemic, the volatility in commodity markets induced by the Ukraine war, the China lockdowns eroding multinational corporations’ revenues, and the current wave of protectionism and economic nationalism are threatening the gains from globalization and adding up to a shift toward deglobalization. There is no denying that globalization has indeed slowed down, but we are not in the deglobalization arena yet.

Three distinct scenarios are likely to emerge based on current trends and economic uncertainties.

In a recent speech at the Brussels Economic Forum, U.S. Treasury Secretary Janet Yellen said, “We have become too vulnerable to countries using their market positions in raw materials, technologies, or products to exercise geopolitical leverage or disrupt markets for their own gain.”

“We have a set of common vulnerabilities that we should address. My point is to suggest that we should consider ways to maintain free trade and at the same time lessen some of these risks.  We do not want a retreat from trade integration, causing us to forego the benefits it brings to the world,” observed Yellen.

“What I am proposing is that we properly account for the externalities stemming from these other considerations—concentration, geopolitical concerns, security risks, and values.  In the case of rare earths, numerous other countries possess these resources.”

“I believe that we need to consider how to incentivize the friendshoring of supply chains to a greater number of trusted countries for a variety of products, so we can continue to securely extend market access, with lower risks to our economy, as well as to those of our trade partners,” commented Yellen.

In a transcript from a recent press conference, Yellen explains, “Ideally, we would have a large group of trusted partners so that we can maintain the efficiencies that come from the global division of labor, but also feel more secure about the supplies we have in so there may be some cost to bear and permanently with higher inflation, but just a somewhat higher local costs, somewhat less efficient system, but one that is more resilient, but I think this approach[…] is a way to manage that trade off.”

One of the scenarios that is likely to continue is the trend to shift toward closer supply chains with more corporations reshoring, near shoring, or friendshoring their supply chains. Managing risks with the aim of avoiding disruptions or threats to business operations even if there is some cost to bear will remain a priority for certain corporate treasurers.

The second scenario likely to emerge is what Cora Jungbluth, Thieß Petersen and other experts believe the world is currently headed toward – two distinct geopolitical economic blocs: one consisting of democratic, market-economy countries (the U.S., Europe, Japan, South Korea, Oceania, North and South America), and another bloc of autocratic states (China, Russia and their most important trading partners).

Jungbluth and Petersen say, “Similar to the Cold War, there could also be a third bloc of countries (for example, India) that try to avoid a clear assignment and continue to maintain their economic relations in both spheres.”

The third scenario is the likely return to normal, where globalization will refocus around China. In the latest survey conducted by the Shanghai Chamber of Commerce, no American company said that they were going to relocate production or onshore operations – that is, move out of China and return to the U.S.

Retrenching from globalization is not a new concept, and now the pandemic, the Russia-Ukraine war, and the intensified lockdowns in China have renewed the claim that globalization is reversing. However, when viewed from the perspective of multinational corporations, trade in services (not just trade in goods), and technological advancement, it is evolving in a different form – it is diversifying.

Michael Waugh, Economist and Monetary Advisor at the Federal Reserve Bank of Minneapolis in the U.S., presents his differentiated viewpoint rather convincingly – “Let’s map this back into the real world. People are saying, OK, supply chains are all messed up; we're all uncertain about what's going to happen in the world. One gut instinct is, let's pull everything back home. But there's also another force, which is to diversify: Maybe I keep the China operation, but then I start exploring Vietnam, or I start exploring Thailand. Maybe I go into Africa.”

“Diversifying could mean across countries or it could be across time (building up inventories). Whether I'm diversifying across countries or I'm buying and holding more stuff from abroad, it's going to show up as more trade,” remarked Waugh. Corporate treasuries should remain open-minded to this compelling argument to figure out the path forward in the deglobalization conundrum.

The world may be heading into a recession