With today's rapid development of cryptocurrencies, prior resistance to digital assets adoption, and the fierce competition surrounding Web 3.0 has led traditional financial institutions to reassess the use of digital currencies. ICICB Group, a Dubai-based investment firm, is entering Latin America's crypto space with the launch of a digital bank in Brazil, boosting automation to the region.

The company has obtained a license to open a digital bank and cryptocurrency exchange in Brazil with the aim of increasing access to financial services for businesses and institutions. Services will include fiat-crypto conversion, ATM services, retail banking, monetary remittances, AI leverage trading, credit facilities, stable exchange rates, custody of crypto and fiat, and decentralized crypto wallets, among other products.

According to reports, ICICB is implementing a robust Anti Money Laundering compliance framework to ensure a high of regulatory compliance. In addition, ICICB has applied policies to offset the risks associated with trading crypto assets in order to instil a sense of security in Latin America.

Mastercard is creating additional fraud detection capabilities as part of its strategy to attract more businesses from companies that may turn to fintechs for the same services, according to the American Banker. Chris Reid, Head of Identity Solutions, Mastercard, commented that they want to distinguish themselves by enabling more successful transactions and tackling a big issue, first-party fraud, which has grown significantly.

Mastercard not only competes with fintechs, but also with Visa, which is said to be improving its fraud detection capabilities as well. Reports indicated that Visa and Mastercard are managing the identities of fast-paced digital commerce transactions as effectively as possible, another way to demonstrate value beyond payment processing. Reid further added that combating identity fraud is one way to measure the effectiveness of their services. In this effort, Mastercard states they are extending its card brand’s identity risk technology by integrating Microsoft's artificial intelligence to detect suspicious user behaviour early. This is said to increase the likelihood of accurately approving the transaction and reducing chargebacks and refunds.

US open banking regulations deferred due to privacy concerns

According to Reuters, privacy concerns have reportedly delayed the new open banking rules in the US that would enable consumers to share their financial information with third parties.

The Consumer Financial Protection (CFPB) rule that would allow consumers to share their financial data is said to help consumers facilitate switching service providers, while benefiting from lower costs. However, CFPB’s reservations are due to consumer privacy and data protection issues, in particular the potential misuse of consumer’s personal data by big tech companies.

According to reports, this delay was lengthened substantially as regulations and penalties against major tech companies are becoming widespread worldwide and regulators are working on tighter restrictions designed to further protect consumer privacy. The CFPB was urged to move forward with a regulation that would provide customers the right to transfer data from one bank to another in 2021. However, the US banking industry does not yet have open banking standards nor does the CFPB intend to act quickly on closing the regulatory gap, unlike the UK and other European countries.

Even with stronger restrictions being implemented, consumers are still cautious of their data privacy issues. According to a 2021 Axway survey, 47% of US consumers are concerned that they will lose control of their access to financial data. More than half of US adults surveyed by the Future of Tech Commission felt that they had slightly less or much less control over their personal information and privacy. 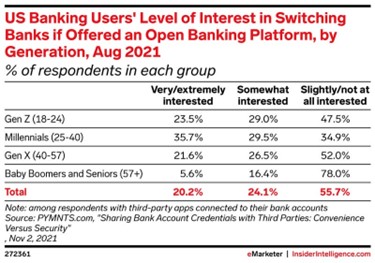 Deutsche Börse, a Germany-based international exchange organisation and securities trading infrastructure provider, is expanding its cloud-based online analytics platform A7, with the aim to use historical market data from the CME Group, an international derivatives marketplace. According to reports, the two companies have signed a licensing agreement that enables market participants to test trading strategies and make informed trading decisions by subscribing market data sets from exchanges via the A7 platform.

As noted in the report, CME Group’s historical data will be available daily on a transaction plus 1 day (t+1) basis, initially with data from each of the four designated contract markets, the Chicago Board of Trade (CBOT), Chicago Mercantile Exchange (CME), Commodity Exchange (COMEX), and the New York Mercantile Exchange (NYMEX). The new data sets from the CME Group are expected to be available in June 2022. DIn addition to CME Group market data, A7 users should be able to access detailed Eurex, Xetra, and EEX market data to trade more efficiently and develop and test execution algorithms more easily according to reports.

Degica, a global marketplace payments provider, announced the release of 41 KOMOJU apps on the Shopify App Store. This is said to enable merchants to use a single account to accept payments in a wide range of reliable ways, including Konbini and Paidy in Japan, Alipay in China and Toss in South Korea. Shopify’s recent announcement stated that they are updating the way merchants connect to payment service providers (PSP), all PSPs are currently required to provide services via the Shopify App Store. According to the press release, Degica has established itself as one of the few PSPs that are willing to facilitate customer support under the new system.

The solution is based on the company's KOMOJU payment platform and reportedly covers all major payment methods in Japan, China, South Korea, Europe and APAC countries. Degica suggests the new KOMOJU-based apps will enable Asian companies the ability to accept payments from around the world and open up previously difficult-to-enter Asian markets to European companies, creating a more connected global marketplace.

Listen to 5 news topics covered in a 23 minute podcast.