Data from the Economic Research Council, the UK's largest independent organisation for funding research on economic and social issues, shows that, although the rate of corporate taxation has decreased significantly in the past decade, the overall amount of corporation tax actually paid has remained stable.

The chart below uses figures from the government’s Public Sector Finance report to display the absolute receipt of tax revenue from private corporations. The figures for the financial years beginning in 2017 are Office for Budget Responsibility (OBR) projections that are based on the current rate of corporation tax and do not reflect any of the political parties’ planned changes. 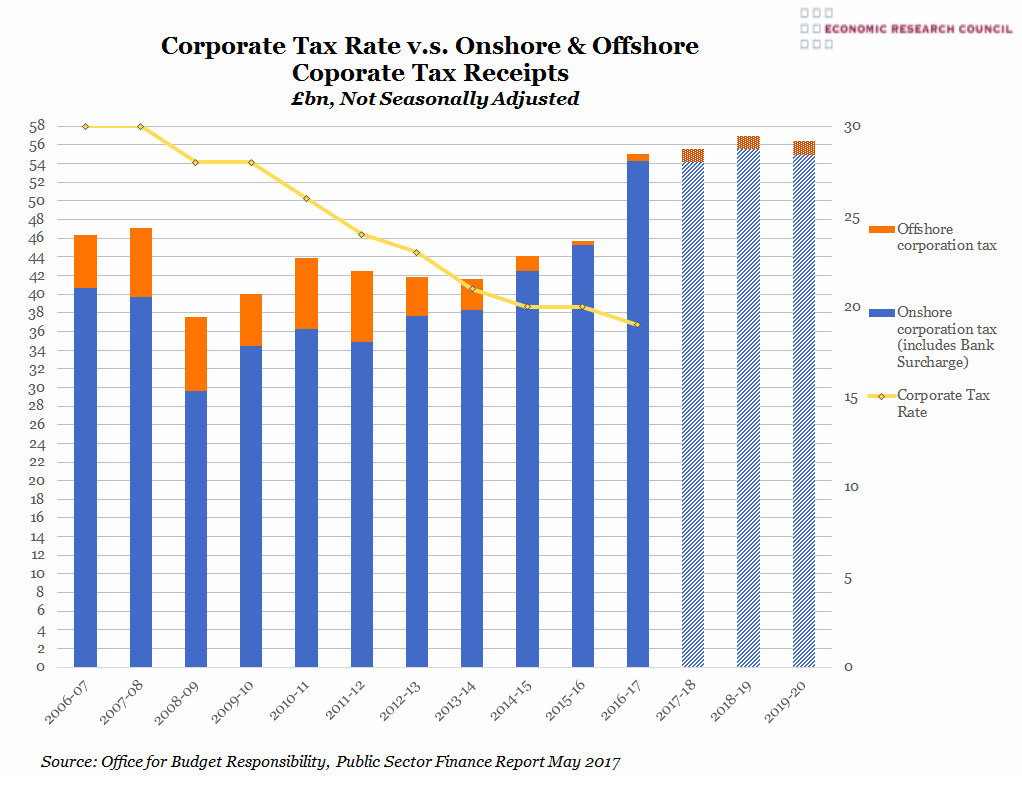 The chart shows three key shifts in the UK's corporate tax receipts in the past 10 years:

Corporation tax is an important policy area in the UK's upcoming general election on 8 June and it's one where the two main political parties diverge. The main rate currently stands at 19 per cent but Labour pledges to raise it to 26 per cent, while the Conservatives have promised a further cut to 17 per cent. UK corporation tax is currently the lowest among G7 countries and among the lowest in OECD countries. According to the Economic Research Council, Labour’s proposed rise would maintain the UK’s position in the G7 but take the UK 2 per cent above the OECD average corporation tax rate.

The ERC research states: “Should the tax rate be raised there are fears it would result in a reduction in private investment, and therefore economic growth. Business investment in the UK has been subdued since the 2008 recession and indeed dropped in 2016, despite the seven cuts in tax rate in the last decade. Following the Brexit referendum and our potential departure from the single market, there is apprehension that companies will be compelled to leave the UK altogether, leading some to believe that they must be incentivised by further tax reductions to stay. However critics of this perspective point to numerous other developed nations, for example Germany and the US, whose corporate tax rates are far higher and whose economies enjoy growth at similar or higher rates to the UK.”

CTMfile take: This is interesting data showing that corporation tax receipts have remained relatively stable over the past decade despite a reduction in the main UK corporate tax rate from 30 per cent to 19 per cent. It's also an important issue in the upcoming UK general election. But there are also some interesting issues here for corporate treasurers, who have an inside view on this. Do reduced tax rates really stimulate private investment and economic growth in your business? Do you see a correlation between lower corporate tax and higher profits?