A significant number of S&P 500 companies publicly disclosed that weather events affected their botton line last year but few quantified that effect, according to a report by S&P Global Ratings. Together with climate risk management specialist Resilience Economics, S&P Global Ratings this week released a co-authored report, The Effects of Weather Events on Corporate Earnings Are Gathering Force, which looks at the prevalence and materiality of climate risk for companies in the S&P 500 index.

The report is based on public corporate research updates and earnings call transcripts from April 2017 to April 2018, but excludes data from financial institutions, including insurance companies. It found that:

S&P Global Ratings stated that the effect of climate risk and severe weather events on corporate earnings is meaningful. It added: “If left unmitigated, the financial impact could increase over time as climate change makes disruptive weather events more frequent and severe.”

The report also found that discussions of climate risk and its effect on companies' earnings are now reaching the CEO's office. It stated: “Of the earnings calls in financial year 2017 where weather was mentioned as having a material effect on corporate earnings, more than half (53 per cent) of these disclosures were made directly by the CEO. The CEO and CFO combined made 86 per cent of all disclosures of climate-related impact on earnings. Moreover, CEOs and other top company executives often cite climate and weather as a risk factor beyond the control of management.”

The charts below show that weather and climate have always been at the top of the agenda on executive earnings calls and that the CEO and CFO are the main stakeholders who disclose weather-related impacts. Also, weather is often blamed for under-performance, but is rarely blamed when company performance excels expectation. 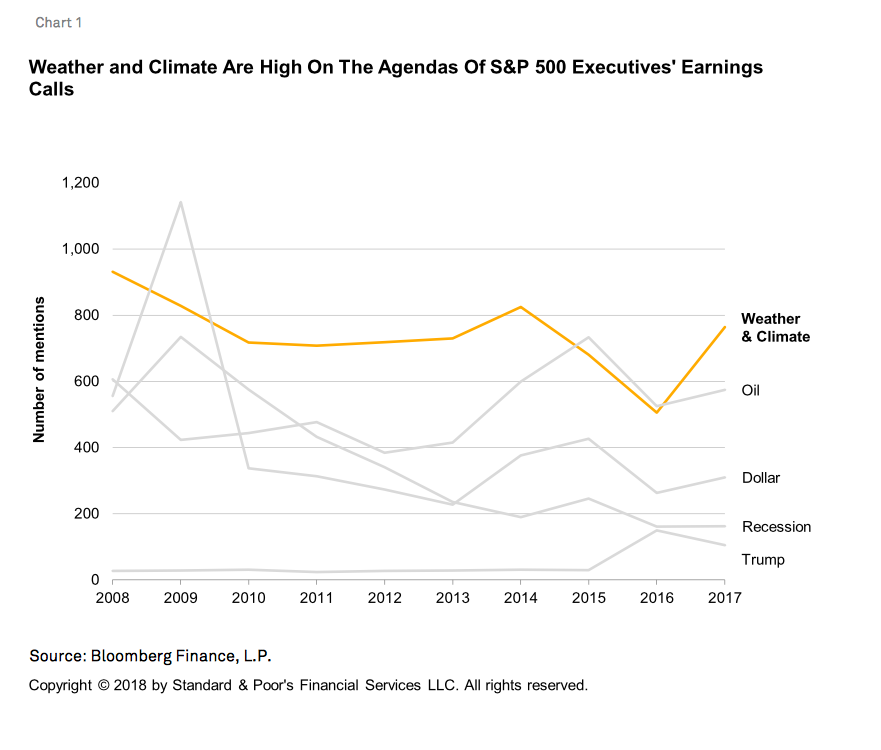 Green evaluations - time to turn over a new leaf?