The market for electronic billing and invoicing is set to grow annually by 10-20 per cent, with 2016 volumes reaching around 30 billion invoices globally, according to a recent e-invoicing report.

Several broad trends emerged from the report, including the role that digitisation can play in error handling, regulatory development that will change invoicing in Europe and the increasing use of e-invoices in creating a transparent fiscal environment.

Billentis's Market Report 2016: E-Invoicing/E-Billing also highlights how the uptake of electronic forms of invoicing and billing varies greatly around the world, with strikingly different levels of maturity in different countries and regions. In the graph below, Billentis shows that Scandinavia and some central and south American countries – Chile, Brazil and Mexico – are leading the way when it comes to market maturity for electronic invoices/bills. 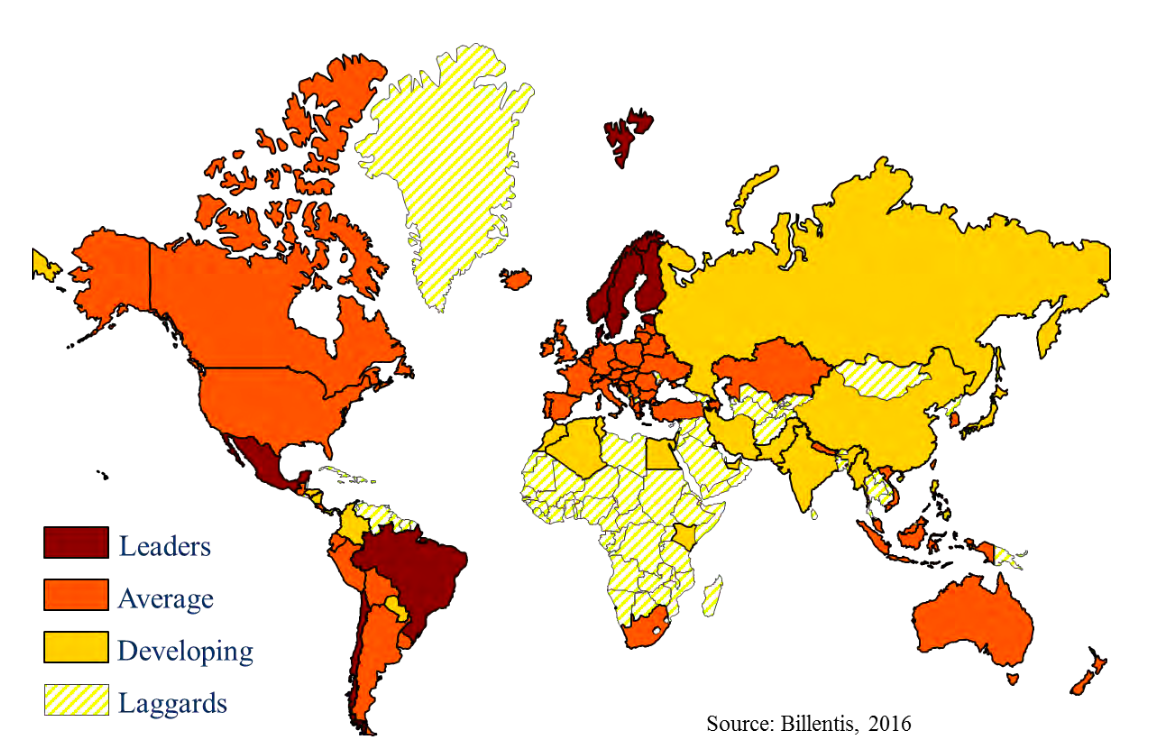 Digitisation is not enough

Next-generation technologies will also change invoicing, in particular Billentis found that companies will be moving more invoice activity onto Cloud-based applications and allow more functionality on mobile devices. “Cloud computing allows scalability and adjustable costs per transaction, while mobile devices enable employees to work more easily away from traditional office environments, as well as providing a new form of interaction between people and machines.”

While most western businesses and governments have legacy paper-based processes and systems, there is incremental change to adopt digital processes. But some countries are choosing to take a more sweeping approach: “A number of Latin American and Asian countries are instead developing disruptive models that are optimised for a fully digital world on a broad scale. These developments on a national level also make sense on a company level. The time is right to critically question the use of traditional models and shift to disruptive technologies.”

However, the report also notes that the digitisation of invoices alone will not be sufficient for achieving “zero-touch and automated invoice processing”. Poor data quality is still a considerable barrier to the automated processing of invoices, meaning that most organisations still have a high proportion of exception handling. Koch writes: “Inaccurate information in B2B invoices is a major reason for payment delays.”

The report also outlines the case for pushing invoices to the fore when it comes to auditing: “it is the invoice that provides the most complete information for tax authorities.” It suggests that in future authorities, where possible, will require companies to use e-invoicing only and for e-invoices to be shared with tax authorities. The emphasis is also on sharing the documents with authorities in near real-time, hence the concept of the 'real-time audit'. “All data of fiscal relevance will be reported to the tax authorities electronically in the future. Real-time or near real-time audits will become a matter of course,” writes Koch. He adds: “Most countries in Latin America, as well as some in Asia and Southern Europe (Portugal, and Spain from 2017) are forerunners with respect to this development.”

Trends and changes ahead

The report also identifies these key topics for the next two years:

Amid these trends and developments, the Euro Retail Payments Board, which was set up by the European Central Bank to replace the SEPA Council, has launched a survey on e-invoicing and e-bill payment solutions. The aim of the survey is to get a better overview of existing or planned solutions as well as barriers that may prevent the development of pan-European e-invoicing solutions.