Blockchain is a collapsing protocol; it acts as a store of value, a payments platform, and a means of recording changes in data, whether a record of ownership, ledger entry, or otherwise. This means a blockchain can combine the processing and role of the general ledger, payments platform, and bank, not only within a single organisation, but across many. And because the record is distributed across multiple hosts, and therefore potentially organisations, a change entered in one, simultaneously updates others, allowing real time and full simultaneous settlement of transactions where value is exchanged for goods or services. 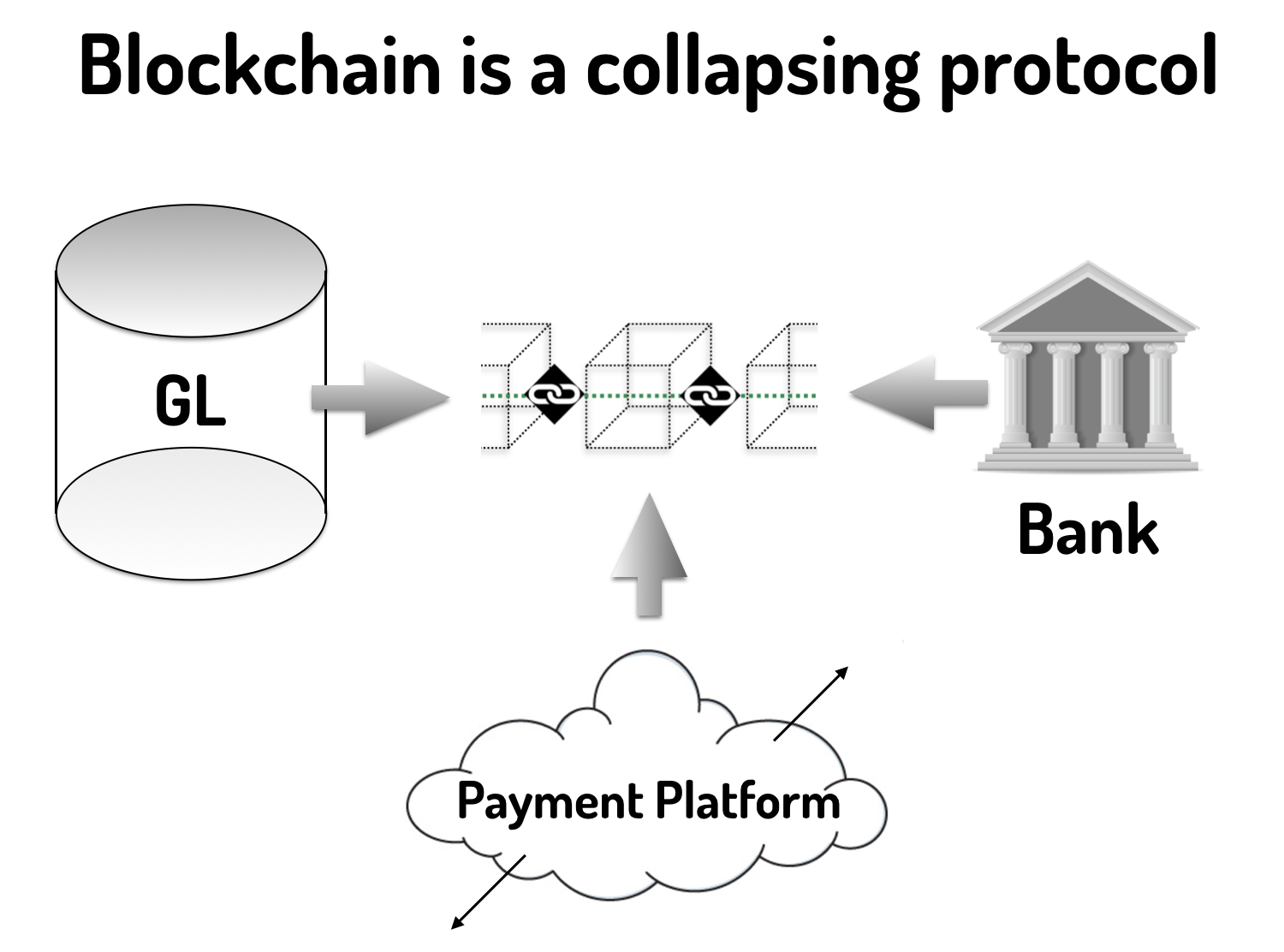 The distributed nature of blockchain, the cryptography employed, and the consensus mode of operation which ignores bad actors (hackers), creates a kind of trust fabric, where every node on the network can trust every other node, without the need for an intermediating guarantor. True blockchains are also immutable in the sense they can never be changed.

The term blockchain is derived from the bitcoin protocol, the first bitcoin block being processed, or mined, on January 3rd 2009. That first block, and its successors, can be accessed by anyone, anywhere in the world equipped with a search engine. Known as the genesis block, it’s special for a variety of reasons. Most notable is the colossal achievement in establishing a secure digital store of value, or currency, a culmination of some 30 years’ mathematics, British and American cryptography, game theory and coding. It was then in 2014, the Bank of England became interested. Their third quarterly review examines payment technologies and the emergence of digital currencies, concluding the key innovation is the ‘distributed ledger’ allowing payment systems to operate in an entirely decentralised way, without intermediaries such as banks.

Source & Copyright©2017 - Blockchain Hub
Politely setting aside any opinion you may have, blockchain and digital currency technology is here to stay. In 8 years, bitcoin, as a protocol has never been hacked, and the 800 or so other derivative currencies get stronger with each new iteration. The entire bitcoin network, and transaction history, can be re-generated from a single record, giving it a high degree of resiliency. Notwithstanding, in promoting broader understanding and adoption, the challenge is twofold. Firstly, descriptions of blockchain reference a distributed ledger, or database, that maintains a continuously growing list of records, called blocks. Whilst technically correct, this doesn’t capture the corporate imagination. It’s the equivalent of describing radio as the simultaneous periodic variation of orthogonal electric and magnetic fields. However, both blockchain, and radio, as a communication technology, are foundational; they are bedrock onto which new economies, sectors and businesses, can be built. But it took over 100 years for Marconi’s ideas to become as ubiquitous as they are today, so blockchain has a bit to go yet. Secondly, most descriptions of blockchain technology omit any reference to the digital, or cryptocurrency part. That, in part, may be due to the stigma associated with bitcoin. But the ability to create a secure, cryptographic event, which is a store of value, a medium of exchange, and unit of measure, importantly allows bitcoin, and its other derivatives, allows it to be classified as a currency. The inclusion of the ability to store value, delivers a higher order of eﬃciency, versus creating a blockchain referenced against traditional fiat currency infrastructure.

Why explore blockchain and digital currencies

Against this backdrop, the Cash and Treasury Management Community need to be exploring blockchain and digital currencies for the following reasons:

Haydn Jones has over 20 years experience working for investment banks, a central bank, a regulator, a global management consultancy and a Japanese technology company. He has run Cash Management and Funding units. He is currently the Founder of Blockchain Hub, a consultancy providing executive education and strategic support for organisations looking to explore blockchain and digital currencies.

Blockchain could save banks $12 billion a year