Kantox was launched in June 2011. It matches different companies' foreign-denominated bills, allowing them to pay each other rather than buying a foreign-exchange hedge from a bank. It is basically a netting marketplace where companies can look for and find others companies - their counter parties - with opposite currency flows to match and net their flows. So for example, a U.S. company looking to trade in Europe could match its euro cash flows with a European company looking to trade in the U.S. in dollars. Kantox is regulated both by the HMRC and by the FSA.

About 15 companies, mainly Spanish, have traded through Kantox, with 25 more registered to do so.

How it works
Kantox uses a computer algorithm to match counterparties with receivables or payables in currencies they want to exchange - in USD, GBP and EUR. The companies that are allowed to list themselves are vetted and their credit history gone over with a fine-tooth comb before the system matches them with an FX counterparty. Once a counterparty has been identified, a digital agreement is drawn up and both parties agree to abide by its terms – should one of the parties pull-out, the system can quickly rematch the cash flows and currencies. Other features of the Kantox FX peer hedging are that they:

A payments provider who operates in 60 countries acts as a clearing house for the system. The two receivables streams are netted out only once has both legs of the deal in its accounts. All accounts held by them are segregated client accounts. The day before due date the funds flow to the client account, and a check is made before they are finally netted. 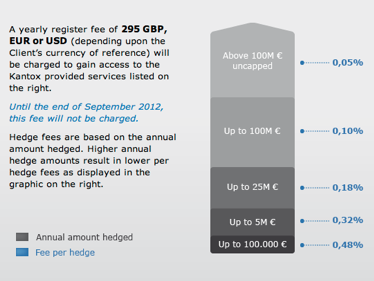 In the Kantox netting marketplace, there is no principal risk as the cash flows are netted at due date, not before.The Kantox system clearly will reduce FX hedging fees. Although it doesn't eradicate counterparty risk, it does mean that the most a corporate can lose is the cost of the hedge, not its principal.

I wonder why don't the large bank groups offer such a service amongst their customers? Surely, it doesn't have anything to do with the profits they make from FX?