Fraud is an inevitable part of doing business and today it is growing faster than ever.

Internal fraud is the biggest source of fraud and the drivers

The latest report to confirm that internal fraud is the biggest is Kroll’s ‘Global Fraud Report - vulnerablities on the rise’* which reported that the biggest fraud threat to companies came from within. The level has risen 72% from previous survey.

Bizarrly in 2015 75% of respondents reporting at least one fraud in their company in the past year has risen to its highest level in the report’s eight-year history, whilst every separate category of fraud has decreased. 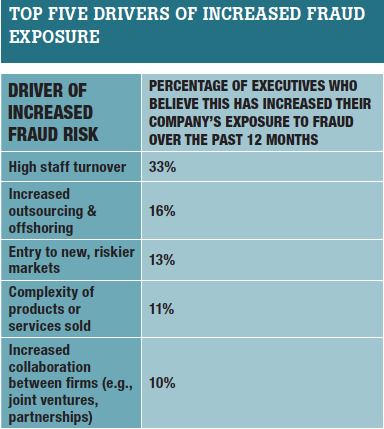 The top methods of exposing fraud are:

The LexisNexis True Cost of Fraud Study showed that merchants experienced increased fraud losses again in 2015, they lost an average of 1.32% of revenue to fraud and fraud related costs, a whopping 94% increase compared to 2014. The study showed that international and m-commerce merchants were hardest hit with losses of 1.56 and 1.68% respectively.
Source & Copyright©2015 - LexisNexis

The study found that merchants are struggling to manage fraud through remote channels, such as online, mail order and telephone order. The anonymity of these channels, plus the ability to conduct more fraudulent transactions in a shorter time, means that remote fraud is up to seven times more difficult to prevent than in-person (card present) fraud. However, somewhat surprisingly, fraudulent in-store pick-ups, also known as ‘click and collect’ where the customer orders online and collects in-store, account for a quarter of lost/stolen merchandise.

* The Annual Global Fraud Survey, commissioned by Kroll and carried out by the Economist Intelligence Unit, polled 768 senior executives worldwide from a broad range of industries and functions from January through March of 2015.

When did you last review / update your fraud prevention processes?

The plan aims to rapidly find alternative sources of energy while ramping up energy savings and renewables. It promises to benefit...