China's currency, the renminbi (RMB), is now the most actively used currency by the UAE and Qatar for direct payments with China and Hong Kong, according to SWIFT.

Data from SWIFT’s RMB Tracker shows that the RMB accounted for 74% of payments by value from the Unite Arab Emirates (UAE) to China and Hong Kong, in 2015. This is an increase of 52% on the previous year. While in Qatar, the RMB was used for 60% of all payments, representing a rise of 247% compared to 2014.

A SWIFT representative said: “Use of the RMB has been rising across the Middle East region over the last few years. Adoption has been supported by developments such as the establishment of an RMB clearing centre in Qatar last year - the first in the Middle East – and the recent memorandum of co-operation signed between the People’s Bank of China and the Central Bank of the United Arab Emirates to set up RMB clearing arrangements in the UAE.”

However, SWIFT data shows that the majority of cross-border flows worldwide between these Gulf States and China/Hong Kong are in USD and subsequently intermediated, mainly by USD clearing banks.

The RMB is the fifth most used currency for global payments by value, as of December 2015. It accounted for 2.31% of global payments, with an increased market share compared to 2.28% in November 2015. 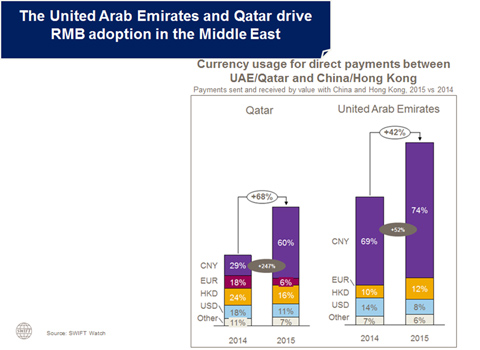 The pitfalls and opportunities in RMB repo