The issuance of global Islamic financial instruments has more than trebled in the past decade but many challenges remain, including liquidity, lengthy preparation times before issuance and the legal hearings involving Dana Gas's outstanding sukuk bonds. Is this a market that could be of interest to corporate treasurers?

Between 2007 and 2014, Islamic finance globally roughly tripled in size and now holds total assets of around $1.9 trillion. Several developments seem to be boosting the dynamics of the Islamic finance market and raising the profile of sukuk bonds, which have increasingly become a part of mainstream investments for fund managers, central banks, sovereign wealth funds and banks. The world’s biggest ever sukuk issuance was recently completed on the Irish Stock Exchange during the second quarter of this year, netting the kingdom of Saudi Arabia a cool $9 billion.

Nade Ali Shah, of Standard Chartered, writes in an article published on Euromoney.com that regulatory changes in the US and the inclusion of Islamic bonds, or sukuk, in a number of key indices (JPMorgan added Islamic bonds to its emerging markets indices in 2016) could lead to more demand and issuance for sukuk instruments.

Islamic finance is also emerging in African markets and this recent article in the Economist looks at the burgeoning market for Shariah-based finance and how countries such as Kenya, Ethiopia, Nigeria and Senegal are vying to become African hubs for Islamic finance.

However, there are growth problems in this market. One of the challenges is that an initial sukuk issuance can take many months (compared to a few weeks for issuing a conventional bond) because identifying appropriate sukuk assets and finalizing the sukuk structure often takes longer than expected. As Nade Ali Shah notes in Euromoney: “The complexity involved in sukuks can also be off-putting for some investors, particularly the way that interpretations of what is, or is not, Sharia-compliant differ in different parts of the world, not least between the two key markets of Malaysia and the Gulf countries.” And he adds that this discrepancy in interpretation between Malaysia and Gulf markets is unlikely to be resolved any time soon.

The market for Islamic finance also had a setback earlier this month when Dana Gas, a United Arab Emirates (UAE) energy firm listed in Abu Dhabi, became embroiled in a court case when it declared that its Islamic bond issuance had become unlawful under UAE law. As reported by the Financial Times and other media, the company told investors that it could not make payments on its $700 million sukuk bond because its structure had been deemed unlawful under Emirati law. The paper goes on to explain that the energy company wants to restructure the bonds but its investors say the move runs counter to the English law under which the bonds are governed. This has “sent a chill through the world of Islamic finance”, says the Financial Times, and in the three weeks after Dana Gas declared its bond unlawful, there has been a steep fall in issuance of sukuk. This may just be a short-lived jitter because, otherwise, issuance of sukuk instruments has been growing very healthily since the 2008 financial crisis. The graph below (published in the Financial Times, based on data from Dealogic) shows that global Islamic bond issuance has more than trebled in the past decade. 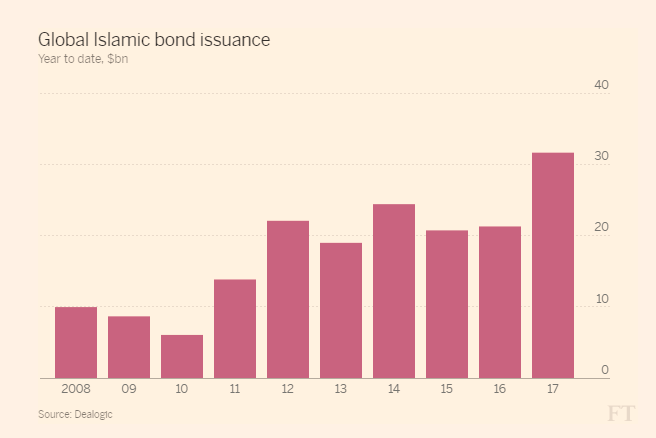