The stand-out presentation for me at Eurofinance 2012 was Mario Del Natale's (from Johnson Controls International, Inc.) presentation entitled 'Moving SWIFT-ly on' which showed how much power corporate treasury departments of large companies have, if fully supported by their CFO.

JCI is a huge, surprisingly unknown, company which in FY 2011 had US$40bn turnover, 162k employees and operated in 130 countries, so they have some bargaining power. Boy did they use it.

The SWIFTNet project
Mario described the origins of their SWIFTNet project: centralisation and moving to Shared Service Centres and bank channel rationalisation. They used a pretty standard approach: SunGard's Trax service as the message processor, one bank per country (mostly, there are a few exceptions), flat fees concept with their banking partners, minimise no. of SWIFT connections by using the the 'HUB' concept - see figure, banks had to follow SWIFT guidelines and employed FileAct bulk file delivery to minimise SWIFT costs. 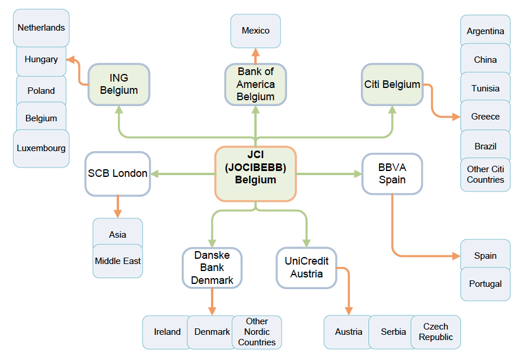 The HUB approach, when the HUB is located in the same country as JCI's BIC, also ensures that all payments are made domestically.

Insistence on adopting standard message formats
The surprise, the non-standard approach was in two places. One, the business units all had to, without exception, submit their payment instructions in the specified XML standard format, so cutting out any central development. Two, if a bank was not ready or could not comply with the SWIFT XML message standard, they switched banks, even if they had used the bank for several years. And in case a bank could not comply with the XML Swift Rules Book, and requested bank-specific customization, the bank would bear the costs of such development.

JCI is now able to move between banks quite easily - they have found it takes two months - due to the use of XML standards and a standard message processing service.

Clearly, this could not have happened without senior management support. It does show how much power corporate treasury departments really have, if they choose to use it.