Keeping suppliers waiting beyond the payment terms for invoice payment makes no economic sense and is damaging the supply chain – yet 27 per cent of invoices are paid late in the UK.

Larger companies in the UK have a 'duty to report' on their invoice-payment performance, under the UK's Payment Practices Reporting Regulations, which were introduced last year. The first tranche of firms obliged to report under the regulations submitted their invoice-payment data by 30 November 2017 and the figures show that more than a quarter of all invoices are being paid late. According to the Chartered Institute of Credit Management (CICM), this is leaving smaller businesses struggling for cash. The CICM's statistics showed that just over half of larger firms are paying suppliers within 30 days, which is excellent news. About 15 per cent are paying longer than 60 days and 27 per cent are paying after the agreed payment term. Of course, agreed payment terms vary from company to company and can also vary for individual supplier contracts. While paying within the payment term is important to enable smaller businesses to plan and manage cash flow, there's also a debate to be had over what is a reasonable and fair payment term. With most companies adhering to the good practice of paying within 30 days, why then are some big firms giving themselves as long as 120 days to pay contractors and suppliers? Some of the key CICM figures include: 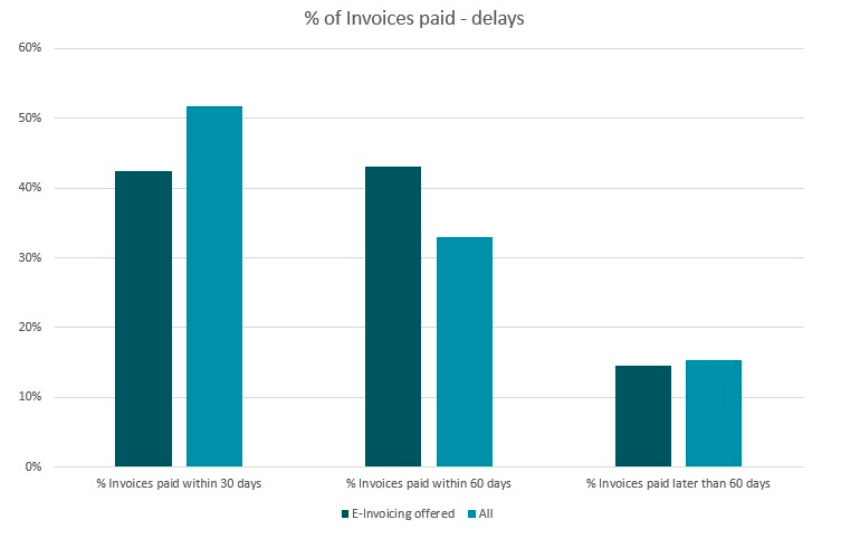 The CICM's Philip King pointed out that the figures show some alarming trends: “The biggest issue for many SMEs is not the length of payment terms but the certainty that payment will arrive when they expect it. Often, payment of a large supplier, the rent, or the wages are dependent on a large invoice being paid. If more than a quarter of invoices are being paid late then the suppliers are seeing a hole in their cash flow which is worrying, at best, and can be catastrophic. For many small businesses, it’s about more than just the balance sitting in the current account.”

These figures – announced yesterday by the CICM – come just 10 days after the compulsory liquidation of the UK construction services company Carillion, causing job disruption and payment default to many of its 30,000 suppliers. Carillion plc doesn't seem to have been in the first tranche of companies that were required to submit payment data under the 'duty to report' regulation. But Previse's Paul Christensen wrote this week for CTMfile that the company's payment terms were 120 days – more than 80 days longer than the average reported time to pay shown in the CICM statistics. Christensen writes that this is “particularly hard to justify when Carillion’s main client, the government, paid their bills to Carillion in 30 days or less”.

Why should payments be a waiting game?

While demanding longer payment terms may seem to make sense to a large company, it's high-risk for the smaller suppliers that have to wait for much-need cash and are exposed to the risk of non-payment, as has been the case for Carillion's 30,000 or so suppliers. Long payment terms are also hugely inefficient from an economical and financing point of view, as Christensen explains:

“It makes no sense at all for a large corporate with easy access to cheap debt and a cost of capital of 1-2% to be “borrowing” from its SME suppliers, who are in the worst possible position to lend, with a cost of capital that might be around 30%. That is a huge economic inefficiency, and one that has been unrecognised for too long.”

Paying suppliers and contractors within agreed (and reasonable) terms isn't just about maintaining good supply chain relationships or making cash work efficiently. When it's clear that SMEs, who have less access to cheap credit, are taking on risks caused by long and late payments, there's an ethical imperative for invoices to be paid on time. There is growing interest in ethics in business and these two reports published this month consider some of the ethical questions that companies and banks face as they make business decisions, touching on some of the issues involved in dealing with and paying suppliers:

Carillion - slow payments have devastated suppliers, and SMEs are the worst hit

We are approaching a third year of obligatory payment practices reporting for large companies and there has been no improvement in payment days: large companies are as still as slow at paying their invoices as they were back in 2017. Manufacturing companies tend to be worse than service companies, and larger companies take 30% more time than smaller companies.  (source: https://www.disputesregister.org/advice/late-and-unpaid-invoices-uk-statistics).