The slump in merger and acquisition (M&A) activity extended into the third quarter as rising borrowing costs, the ongoing Russia-Ukraine conflict, and volatile stock markets continue to dampen sentiment for dealmaking.

While the downswing in M&A activity has been global, it’s been far more acute in Asia Pacific. “The volume of mergers and acquisitions (M&A) in Asia Pacific plunged by more than 40% from last year to about US$156 billion (RM722.35 billion) in the third quarter (3Q), the worst such period since 2014”, according to data compiled by Bloomberg.

In China, Asia’s biggest market, M&A activity remained sluggish in the second half of the year amid inflation, real estate market distress, weak stock markets, and pandemic-related lockdowns. PwC data shows that these factors resulted in China’s deal value falling to its lowest level in eight years in the first half of 2022.

Slowing economic growth and an increasing tightening regulatory environment caused a dramatic decline in Chinese M&A activity, which turned out to be the weakest of any third quarter in a decade.

Global economic and geopolitical uncertainty, along with rickety stock markets, are making Asia Pacific deals harder to come by, primarily because M&A financing is becoming tougher and more expensive. “A potential US$13 billion take-over of Australian hospitals operator Ramsay Health Care Ltd by a KKR & Co-led group fell apart after series of derailed proposals. Rising financing costs were among the reasons the deal didn’t proceed”, Bloomberg has reported.

With a number of banks in the region facing losses on leveraged buyouts or buyout debt, firms are adjusting their dealmaking strategy. Some corporations are adopting a wait-and-see approach before pursuing big-ticket acquisitions, while several are shifting their focus towards small-to-midsized deals.

Despite a slowdown in dealmaking activity in Asia Pacific, Europe, the US and Canada, a report from financial markets data and infrastructure provider, Refinitiv, shows that India is the only global outlier, bucking the worldwide M&A downward trend by registering record deals in the first nine months of 2022.

The data by Refinitiv mentions that M&A activity in India touched an all-time high of $148 billion in the first nine months of 2022, witnessing a surge of 58.2 percent year-on-year. Industry experts believe deal activity in India will see a consistent upward trend and could soon become a $200 billion M&A market.

The rise in acquisitions in India may replenish the M&A pipeline, but analysts believe that any potential recovery of deal activity in the Asia Pacific region will have to include China’s economic recovery.

US and Canada M&A activity

“Fewer than 4,700 deals were announced in the US and Canada between July and September”, as per data from S&P Global Market Intelligence. The world-leading provider of financial information services stated that this marked “the lowest number since the second quarter of 2020 when COVID-19 sparked a collapse in activity.”

Transaction value of US & Canada M&A activity since 2021

S&P Global Market Intelligence further added that “The total transaction value of $255.48 billion was down 58.4% year over year and 44.6% lower than in the second quarter of 2022.”

Data from S&P Global indicates that “The value of deals in the technology, media and telecommunications sector slumped to $55.39 billion in the third quarter, down from $160.35 billion and $176.92 billion in the first and second quarters, respectively.” By contrast, the deals in the energy and the utilities sectors bucked the broader quarterly decline in the value of deals, totalling $41.29 billion between July and September, the highest quarterly total for the sector so far this year, S&P Global reveals. 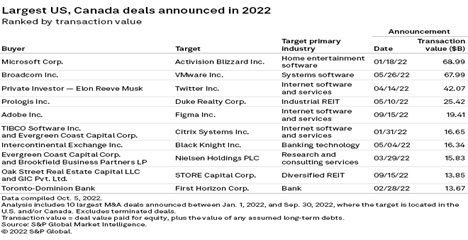 The year started with Microsoft Corp. acquiring video game giant Activision Blizzard in January for $68.7 billion. Each subsequent month registered a decline because of diminishing cash positions and higher financing costs that resulted in disincentivizing debt-funded M&A and a steep fall in deal-making activity.

Plagued by spiralling inflation and rising interest rates, the sentiment for dealmaking in the US and Canada may have cooled, but some bankers are beginning to see an opportunity as HSBC explores a potential sale of its Canadian business, which the Bloomberg News reported could be worth as much as US$10 billion. This transaction together with Dye & Durham’s A$1.27 billion ($815.85 million) bid for Link Administration’s corporate markets and banking segments are among the transactions that could keep bankers busy for the rest of the year, as was published in Reuters recently.

Geopolitical tensions, regulatory intervention and a looming recession may have added pressure to an already fragile global economy and made acquirers more cautious in dealmaking activity. Despite these major headwinds, and the potential for further shocks to come, the M&A market is expected to remain resilient, with some corporations seeing the current environment as a buying opportunity, with a particularly strong flow of private equity driving activity, given that they have large amounts of unallocated capital that will need to be deployed by year-end.

Global CEOs preparing for a recession, but majority think it will be mild and short

US corporations and sectors most vulnerable to the soaring dollar

The biggest global debt crisis is upon us