In the course of a joint development project, the textile machine manufacturer Rieter*and the reporting specialist TIPCO have created a tool which not only reflects the company’s FX hedging strategy but also prepares hedge proposals. The tool even takes care of the reporting for hedge accounting in compliance with IFRS 9.   (This article was jointly authored with Thomas Stäubli, Head of Group Treasury, Rieter Management AG.)

Financial risk management is one of the most exciting activities for most treasurers. However: Before you consider which hedge ratio is right for the risk appetite of a particular company and which derivatives are suitable for achieving this ratio, a financial management strategy needs to be defined, the company’s risk-bearing capacity known and you need to have a clear overview of your exposures.

The latter is a challenge for many treasurers given that they usually have to rely on data from various sources which need to be efficiently captured and processed on the basis of various logics. These challenges had largely been dealt with at Rieter and an Excel-based tool was already in use which allowed the IFRS 9 reporting requirements to be prepared in a structured manner. The amount of manual work associated with this, however, was so high that it was only possible to perform IFRS hedge accounting for a few major projects.

This was not consistent with the declared aims of FX management, protecting the EBIT margin and reducing earnings volatility. The motivation was therefore great to further automate the hedging process and hedge accounting.

The background: In 2011, the Rieter group was split into the two divisions, Textile Systems and Automotive, each of which continued operations as separately listed companies (Rieter and Autoneum). Due to the new structure, the existing hedging strategy was reviewed in 2015 to determine whether this was still consistent with the current business model and the financial objectives. This analysis revealed that several changes needed to be made in the area of FX management.

Despite Rieter only having 18 production sites around the world and cash flows in relatively few currencies, the associated internal and external transactions form a complex structure which needed to be dealt with: Nearly every Rieter subsidiary generates revenues with the other group subsidiaries, as a result of which nearly all combinations of currency pairs can arise between the various sites.

An additional challenge: The extremely diverse business operations in the individual divisions mean that FX exposures arise in different forms. While Rieter generates the majority of its revenues with customer-specific projects, the components division continues to focus on batch production. The FX exposures to be hedged in connection with project-related business at Rieter are hedged when the relevant contract is signed. The risk-bearing FX cash flows can be sourced from various SAP modules. The exposures related to the components business, however, rely on data from currency-differentiated cash flow forecasting in TIP; data which are sourced from various ERPs. The average DSO and DPO as well as the order backlog determine the relevant risk horizon.

Rieter launched the new FX strategy in November 2015 with the preparation of an FX policy which, put simply, defines that project-related cash flows above a defined volume are hedged, and that batch-related cash flows are hedged using a defined hedge ratio for the next three months. From January 2016, a switch was made to implementing the strategy with in-house resources, i.e. without system support. Hedge accounting in compliance with IFRS 9, however, proved to be too time-intensive and, as mentioned above, it was simply not possible for the small treasury team to deal with this manually. A tool was needed which could take care of the manual steps, from the risk assessment and the effectiveness calculation to the reporting.

A quantum leap in the hedging process

The decision was reached in September to use TIP as treasury middleware for risk identification and measurement. The implementation involved three phases: Until December 2016, the treasury team performed project-based hedging and IFRS 9 reports; the second phase, until April 2017, involved the setting up of currency-differentiated cash flow forecasting in TIP, which had previously been performed using the existing treasury management system; the final phase then entailed the automation and integration of all the systems involved.

The following steps are now performed at least once per month in Group Treasury in order to manage risk according to the policy: 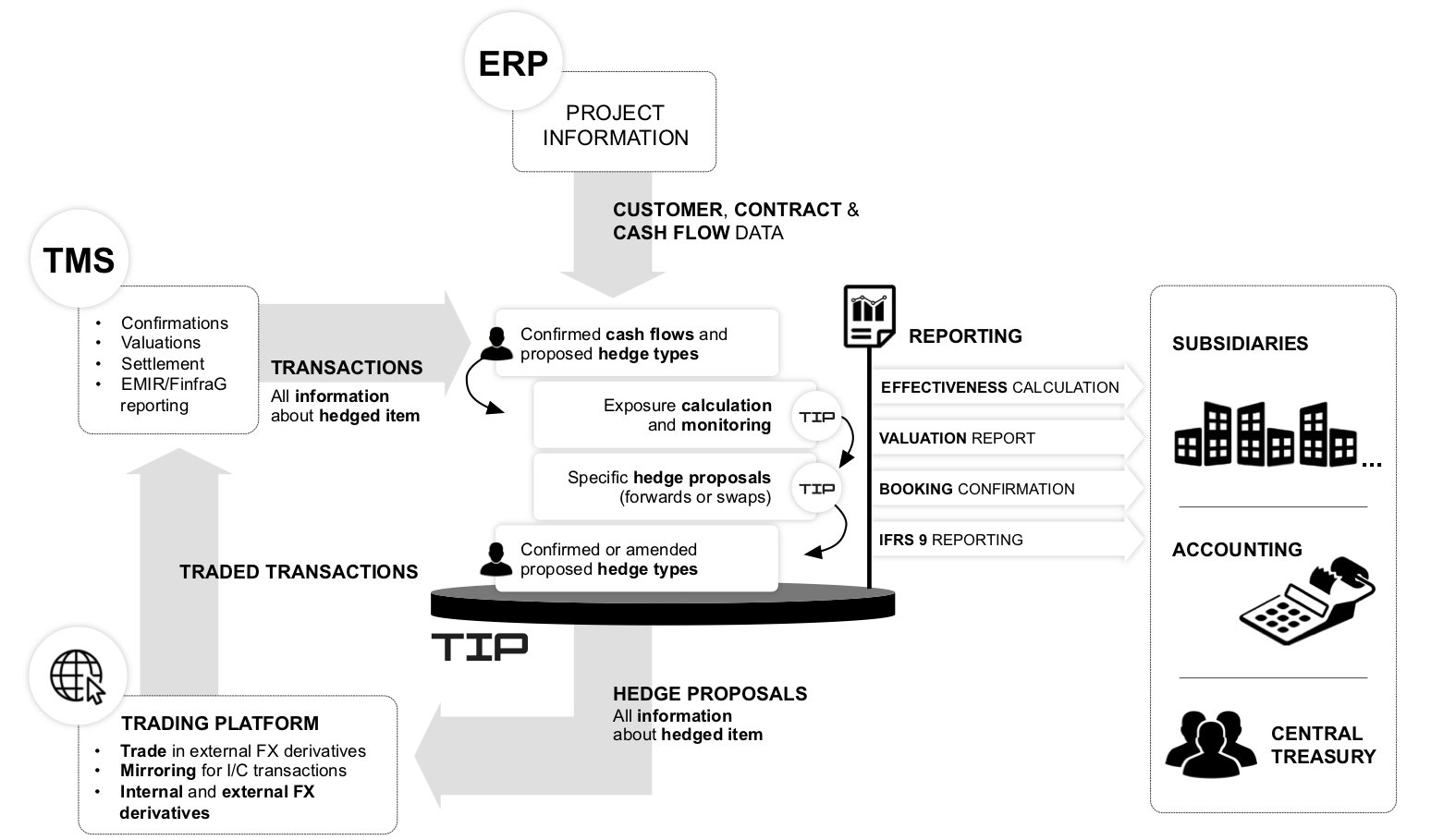 The TIP tool embedded in the system landscape and risk cycle of Rieter: TIP sources the relevant data about projects to be hedged from the ERP system. Users confirm the cash flows and the associated risk identification. The tool then calculates hedge proposals which are manually confirmed or edited before being forwarded to the trading platform. TIP also records which cash flow is associated with which hedge transaction so that this information is returned with the transaction confirmation and is automatically integrated into the reporting.

TIP imports the relevant project-related data from the ERP system, prepares these automatically, and forwards them – once the suitably authorised users have approved the defined steps – to an electronic trading platform for hedging.

Although it sounds so simple, this is a quantum leap in terms of the automation of FX hedging and accounting requirements. This tool now deals with almost all of the tasks which were previously managed manually and also makes it possible to comply with IFRS reporting requirements automatically and to a far greater extent than before.The process in detail (see Fig. 1): The project-related data from the ERP system are exported to TIP via a defined workflow. The authorised user at the subsidiary initially confirms the imported projects and cash flows as well as the hedge type. TIP then compares the confirmed project-related cash flows with existing derivatives and proposes new hedge transactions on the basis of a previously defined hedge ratio (which can be revised at any time). The hedge proposals take into account not only previously hedged amounts and the target hedge ratio but also, based on a complex logic, consider that project-related business may be subject to schedule changes. Figure 2 illustrates such a hedge proposal.

TIP compares which additional hedges are needed in order to comply with the hedge ratio defined by the internal hedging policy, and then proposes appropriate hedge transactions. In this (fictitious) example, the system recommends two forward transactions (with red borders) in order to hedge outflows in Czech crowns (CZK).

Once generated, the hedge proposals can be accepted by the user or modified at any time. All changes are recorded and are only accepted by the system after the user has provided a reason for the change.

The accounting-related recognition, i.e. the hedge type, is determined on the basis of the minimum thresholds defined by Rieter (also possible for each project and cash flow). TIP classifies cash flows as “No Hedge” (amount too low, no hedging), “Standard Hedge” (hedged but without hedge accounting recognition due to immaterial impact on earnings), or “IFRS 9 Hedge” (hedging of major cash flows above a defined threshold).

The defined hedging ratios and thresholds can be changed in the system in the event that the risk strategy is revised.

After being approved by a second user at the relevant subsidiary and the central approval from Group Treasury, TIP forwards the derivatives generated in the hedge proposals to the electronic trading platform. This step already involves a fully-automated allocation of the transactions executed to the hedged item, which remains in the entire multi-system hedging cycle, and which is the key to the automated IFRS reporting in TIP.

IFRS 9 reporting at the press of a button

The unique allocation of hedge transactions to the underlying transactions means that Rieter now only needs the time it takes for a monthly closing to prepare quarterly and annual closings. The report highlights everything that accountants, treasurers and auditors are interested in: All of the relevant entries needed for accounting purposes, the hedge ratios of the various projects, the effectiveness of the IFRS 9 hedges and the hedging documentation. TIP clearly highlights to what extent changes in the fair value of hedge transactions are recognised in equity or directly in income. For review purposes, the report also contains details of the entire history of a cash flow, including all of the associated hedges, and therefore ensures that auditors have access to all the relevant details.

This high degree of automation in the area of FX management allows Rieter to hedge not only major projects but also those with a lower exposure due to the fact that the time involved in hedging has been reduced to a minimum. The outcome: a significantly reduced overall exposure to FX volatilities. The next steps have also been defined. Rieter now aims to automatically hedge its exposures arising out of component-based, batch production activities on the basis of its cash flow forecasting data. To this end, Rieter and TIPCO have jointly developed an application with which internal derivative transactions are standardised and forwarded to Group Treasury in order for these to then be automatically sent to the electronic trading platform and trades executed accordingly.

* Rieter is the world’s leading supplier of systems for short-staple fiber spinning. Based in Winterthur (Switzerland), the company develops and manufactures machinery, systems and components used to convert natural and manmade fibers and their blends into yarns. Rieter is the only supplier worldwide to cover spinning preparation processes as well as all four end spinning processes currently established on the market. Furthermore, Rieter is a leader in the field of precision winding machines. With 18 manufacturing locations in ten countries, the company employs a global workforce of some 5,250, about 20% of whom are based in Switzerland. Rieter is listed on the SIX Swiss Exchange under ticker symbol RIEN.

From dull numbers to smart data: A new era of cash visibility is dawning