In the McKinsey Global Institute paper ‘Global flows in a digital age: How trade, finance, people, and data connect the world economy’ published last month; the global flow numbers are huge and show world trade is increasingly cross-border and world-wide:

McKinsey believe there are now, “two major forces are now accelerating the growth and evolution of global flows”:

The study data covered 195 countries between 1980 and 2012. McKinsey reviewed the dynamics and network structure of these flows and their cumulative impact on countries and growth.They have created the McKinsey Global Institute Connectedness Index, which measures each country’s level of integration into the global network of flows for 131 countries. 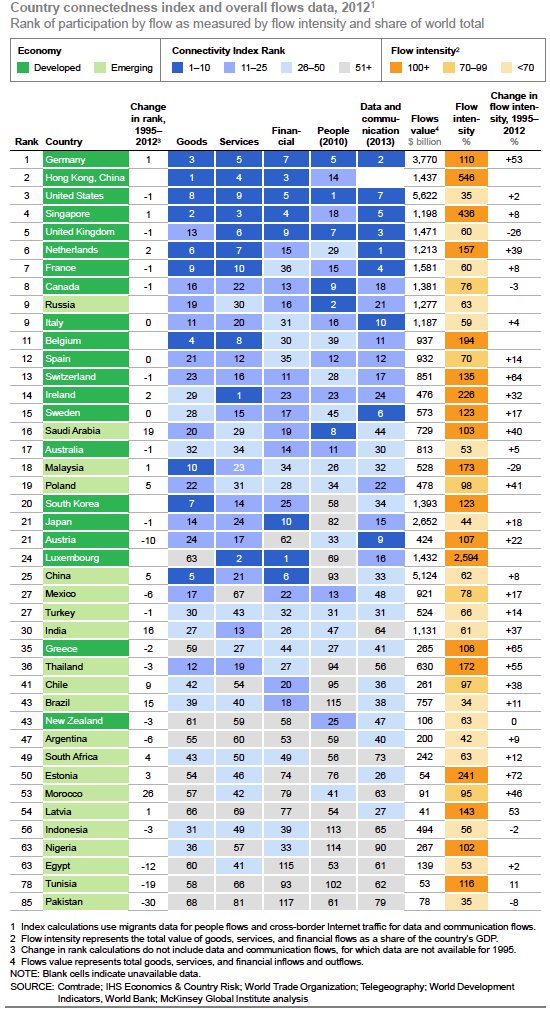 Of particular note in the chart are how:

This analysis showed that the developed economies at the moment are more connected than emerging markets - but the latter are growing rapidly, as shown above. And also that knowledge-intensive flows—rather than labor-, capital-, or resource-intensive—increasingly dominate global flows.

McKinsey’s key conclusions from their research were that:

N.B. The partners of McKinsey & Company fund MGI’s research; it is not commissioned by any business, government, or other institution. For further information about MGI and to download reports, visit www.mckinsey.com/mgi.

CTMfile take: Connectedness is a clearly vital in countries’ economic success. Digitization of communications and trade will enable small countries, e.g. Mauritius and Morocco, and SMEs to participate in global trade. This is where the growth in global trade will come from, this is where your opportunities lie.