McKinsey’s research on working capital (published in an Insights & Publications paper) shows that working capital performance is surprisingly variable, even among companies in the same industry, see figure below: 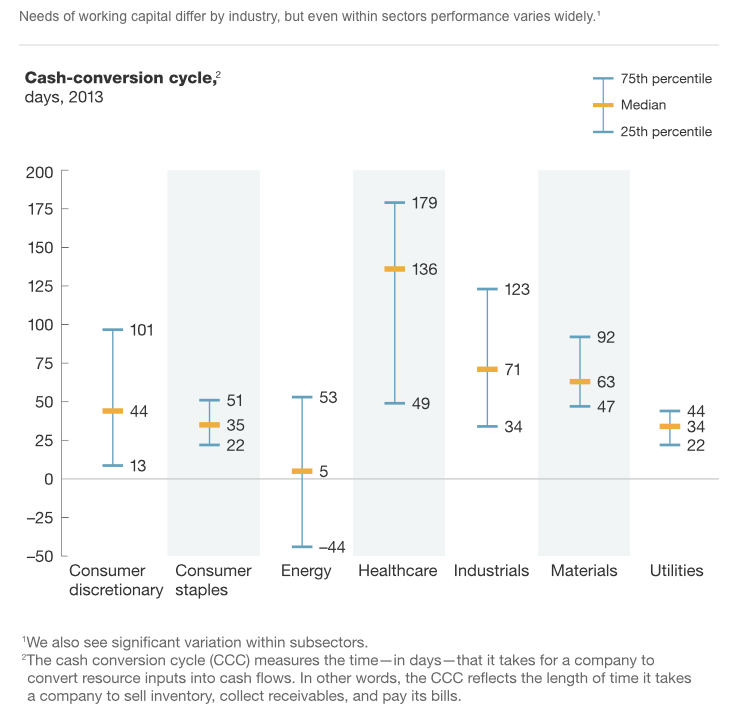 McKinsey explain that, “We routinely see companies generate tens or even hundreds of millions of dollars of cash impact within 60 to 90 days, without increasing sales or cutting costs. And the rewards for persistence and dedication to continuous improvement can be lucrative. The global aluminum company Alcoa made working capital a priority in 2009 in response to the financial crisis and global economic downturn, and it recently celebrated its 17th straight quarter of year-on-year reduction in net working capital. Over that time, the company has reduced its net working capital cycle—the amount of time it takes to turn assets and liabilities into cash—by 23 days and unlocked $1.4 billion in cash.”

Give working capital attention it deserves

In McKinsey’s experience, to overcome the emphasis on income-statement measurers and amortization (EBITDA), the selection of appropriate working capital metrics is vital. “For one manufacturing company, switching from EBITDA to free cash flow as a primary measure of performance had an immediate effect; managers began to measure cash flow at the plant level and then distributed inventory metrics to frontline supervisors. As a result, inventories quickly fell as managers, for the first time, identified and debated issues such as the right level of stocks and coordination among plants.”

However, as they point out, “A disadvantage of free cash flow as a metric is that it may promote shortsighted decisions or excessive risk taking, such as reducing inventory to dangerously low levels to hit an end-of-period target. Tracking capital charges instead offers a more balanced incentive.”

The authors, Ryan Davies and David Merlin, then go on to point out the need to systematically track or report granular data on working capital performance. And then, and only then, can “managers often set performance targets that affect working capital in a less-than-analytical way.”

Davies and Martin point out that after these basics have been achieved, companies can move onto more advanced working capital techniques. “But many companies can wrest much of the value of working capital management just by maintaining the momentum of their baseline programs—to prevent them from eroding as time passes. One pharmaceutical company, for example, substantially improved performance in this area in 2009 and 2010 but by 2013 saw it creep back to precrisis levels as other business priorities diverted attention. In our experience, just paying attention can prevent backsliding.”

The traditional McKinsey closing paragraph reads, “Working capital is important and often under-managed. Improving its performance can generate cash to fund value-creating opportunities and reveal insights that improve other aspects of business performance.”

For more ideas in this excellent paper - recommended - see.