The Misys Confirmation Matching Services (CMS) began life as FX-Match at Citibank which was purchased by Misys in 2003. Since then the services and users have grown steadily, so now Misys CMS is the world leader in confirmation matching services with:

CMS is integrated with many parts of the dealing and trading process so there is full automation, as this figure shows:
  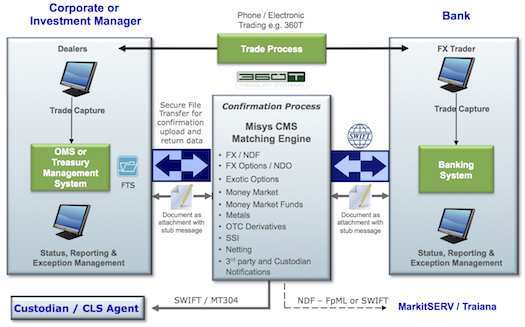 Misys CMS also provide links to CLS agent banks, so corporates can have their FX trades settled through CLS. Misys have found that most companies prefer to confirm through CMS as it caters for all currencies, not just the limited number of CLS currencies.

Additional services and future development
In 2011 Misys launched a SWIFT service bureau to complement their CMS service. The next brand new service from Misys CMS will be an integrated Confirmation Matching and Clearing service to help banks, asset managers and corporates comply with the new clearing and settlement rules for OTC derivatives. Misys expect to be launching this new service in mid 2013.