Corporate satisfaction with their banking services is lower now than in 2013, according to a survey by CGI. One of the key priorities for companies is security as well as enhanced, integrated digital services.

The survey found that 55 per cent of the corporates surveyed said they were satisfied with their banking partners. Last year, 68 per cent said they were satisfied. This is a considerable drop in satisfaction levels and the survey findings suggests that cash management services could be one of the reasons for decreased corporate satisfaction. It found that 56 per cent of companies rated their cash management services as 'good' or 'excellent' but CGI notes this is a big drop from last year, when 71 per cent of corporates rated their service a four or five on a five-point scale. The graph below shows how corporates feel about the main services provided by their banking partners. 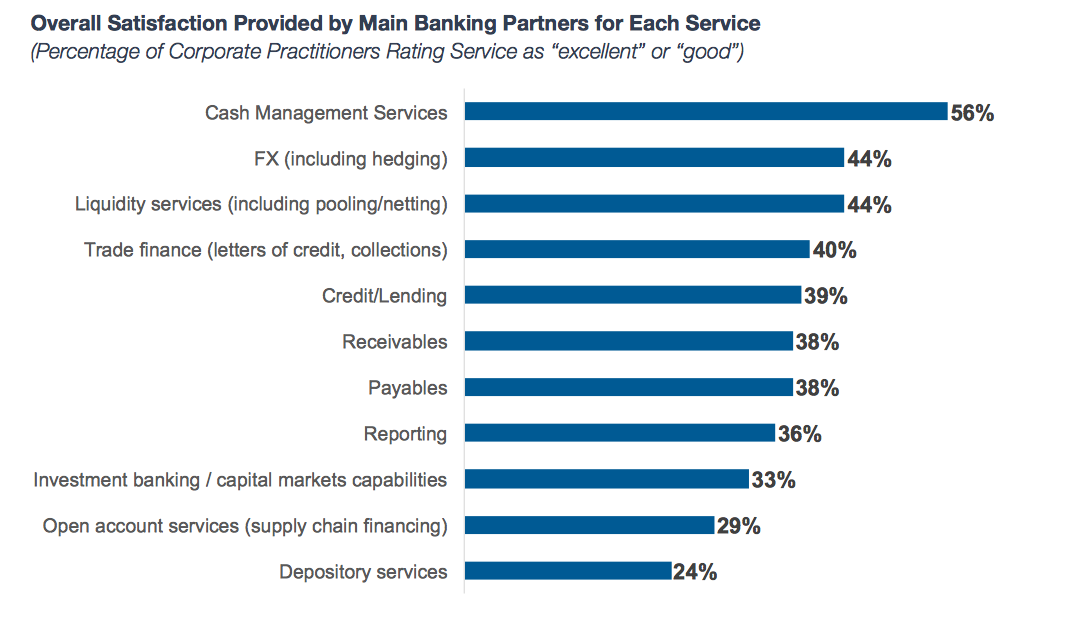 CGI’s 2016 Transaction Banking Survey, conducted in partnership with gtnews, researches the views of both corporates and banks and compares the two. The data shows how corporates evaluate their banking partners and the levels of satisfaction with key treasury services, as well as how banks plan to invest and develop their services in future.

One of the most interesting points from this year's survey is the emergence of fintechs. Corporates are increasingly turning to fintechs rather than their traditional banking providers for some financial services and this is a profound change in the corporate-bank relationship.

A key area of corporate restlessness is their need for better, integrated digital banking services. One sticking point is the need for multi-banking platforms, as corporates no longer have the appetite for logging into separate banking portals. However, banks have so far been reluctant to work on multi-banking services, preferring to maintain control over their client relationships. The survey found that the top three priorities for corporates in their banking relationships are: security, technology integration of services and digital services.

Some of the other key findings from the survey include:

CTMfile take: The main theme that comes out of this report is that fintechs, technology and the urgent need for better digital (multi-bank) services are changing the face of corporate-bank relationships completely. Corporates need reassurance that their banks are providing secure, safe platforms for their treasury services and it seems as though many banks are underestimating just how important that is for customers. We will probably see more companies reassessing and scrutinising their bank relationships in future.

Safety and liquidity are priorities as corporates build cash holdings

Can you use bank services with FinTech solutions?