Surprisingly as global GDP rises, cash in circulation has still increased to meet demand. McKinsey research shows that only two out of 47 economies have decreased the amount of cash in circulation over the last few years. But cash is expensive to operate. It typically accounts for 5–10% of a bank’s entire operating costs.

What is to be done?

Bank of England research shows the position in the UK:

Also in the UK, there are still 2.2 million people predominantly using cash and who would struggle without to access cash. Financial inclusion is a major concern in some countries, especially those with declining cash use or poor banking infrastructure.

DieboldNixdorf in their report “Reinventing cash for your future digital vision” writes that: “Research shows that 94% in Britain who give money to homeless people does so in cash. Donations of loose change are also given in cash.”

The UK Consumers Association is also worried about the removal of cash. The Bank of England and the European Central bank have been vocal in their concerns.

Digital payments are vulnerable to cyber-attacks, energy blackouts and network system failure and also have the potential for terrorist taking over the payment system.

For many central banks, cash is still a fundamental part of crisis planning. Without cash as a backup, a significant IT system failure could leave us without any means of accessing money.

DN concludes that “while the use of cash is in decline, maintaining a cash infrastructure can offer economic resilience and support a more robust national payment network.”

Why people still use cash: 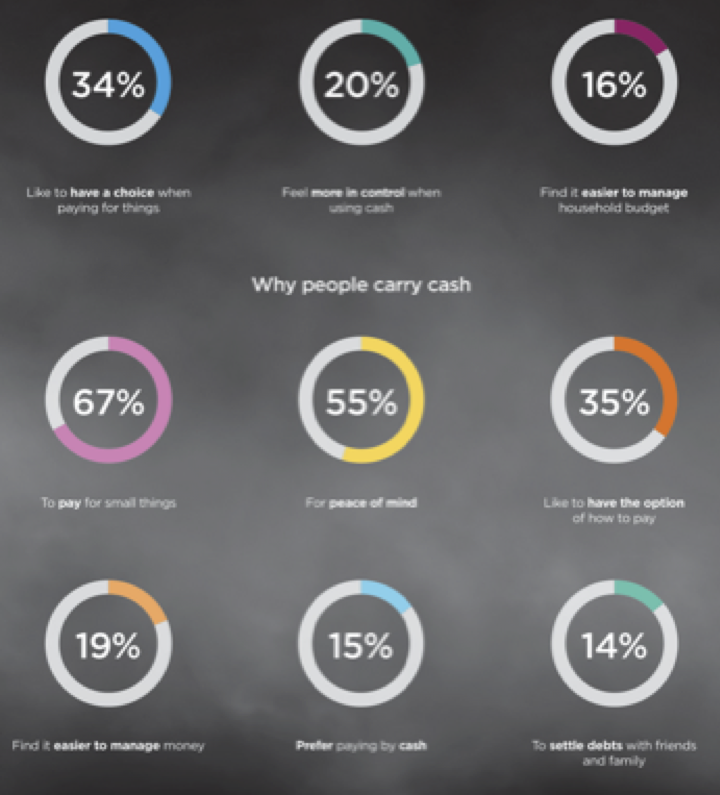 Reducing the cost of cash

They explain how to make cash smarter using:

On the final page of the report, Sarah John, Chief Cashier, Bank of England, “We need to prepare for a world with less cash usage, without knowing exactly what part of cash will follow, and be prepared to respond effectively and sensitively as society’s payment preferences change over the next few years.”

CTMfile take: Cutting out cash altogether will not happen for many years, if ever. Corporate treasury departments and businesses need to accept a range of payment systems INCLUDING cash. (DieboldNixdorf’s excellent report is available here.)

Cash really is worth protecting

UK ‘not yet ready to go cashless’

Danish businesses turning away from cash