The time it takes to pay suppliers across the UK is now on average 42 days, compared to 49 days in 2016 – a reduction of 14 per cent, according to data from global e-invoicing firm Tungsten Network. The report measures the time from invoice submission to payment for more than 19 million transactions routed through Tungsten's e-invoicing platform since 1 January 2016, involving 100,000 businesses.

The improved payment time coincides with the UK government's requirement for larger companies to start reporting their payment practices in April 2017 – 5,812 have done so to date. The average payment time in the rest of Europe is 52 days, while the US has the shortest payment time with 41 days on average in 2018. See Tungsten Network's table below for more data on how average payment times have changed in different countries since 2016.

“Prompt payment is an important contributor to maintaining a healthy supply chain,” said Tungsten Network’s CEO, Richard Hurwitz, adding: “It’s encouraging to see from our data that the UK payments culture has seen some improvement over the past two years. Nevertheless, instances such as the collapse of Carillion indicate that late payments to suppliers continue to be rife in certain sectors of the UK economy.”

The study also found that larger businesses pay three out of 10 invoices after the agreed terms, while only 9 per cent of large UK businesses have signed up to a recognised payment code such as the government-backed Prompt Payment Code.

However, too many businesses are still using paper-based invoices, said Hurwitz. He added: “Companies that digitise invoices cut unnecessary friction in their accounts payable and accounts receivable departments which results in faster payments to suppliers, a good thing for the wider economy.” 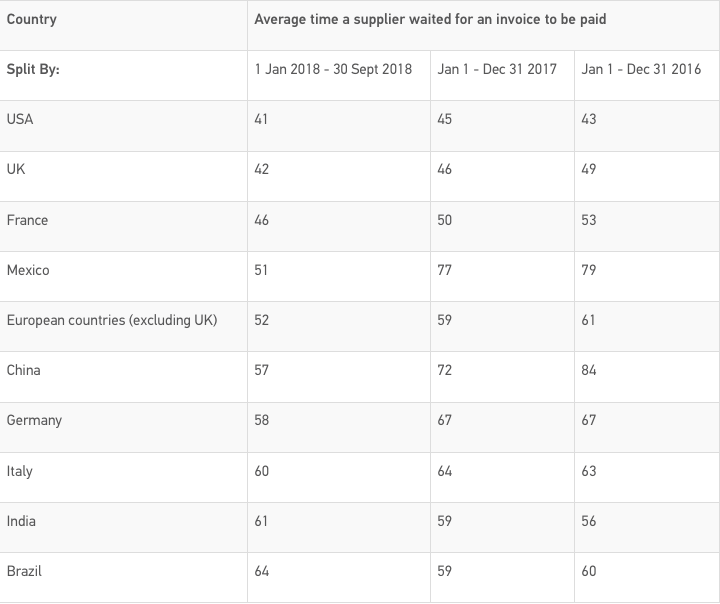 The WSJ ignores damage late payments do to suppliers