Neobank, Varo, on the path to potential insolvency in 2022

According to a regulatory filing, Varo Bank, the first neobank to be granted a national bank charter by the US Office of the Comptroller of the Currency (OCC), runs the risk of running out of funds by the end of the year. Per reports, the bank raised US $510 million in 2021 and had a market valuation of $2.5 billion. However, according to Varo’s quarterly report, Varo held $263 million in equity as of the end of March 2022, with a burn rate of $84 million in the first quarter of 2022.

Colin Walsh, CEO, Varo, commented that the bank would not have to raise additional capital to stay afloat, and explained that the numbers in the report were out of context. Walsh further stated that the burn rate was a variable discretionary investment cost and the report does not outline the bank's complete strategy.

Varo reportedly used last year’s funding to invest in marketing, engineering, product development, operations and risk management. However, like most neobanks, Varo has yet to turn a profit. Varo cited its banking charter as the reason they were able to secure $510 million in funding. However, obtaining the charter took three years at a cost of $100 million. Additionally, reports indicate that Varo Bank focused on lending as part of their efforts to obtain a banking charter, but according to fintech analyst, Banking Dive, the practice has not been a revenue generator. Similar to other neobanks, Varo generates 98% of its revenue from interchanges and fee income.

Reports indicate that Varo has reduced its workforce from 833 to 768 in the first quarter of 2022. According to Banking Dive, the bank boasted 2.7 million new accounts in 2021 (table 1 below, source: Insider Intelligence), but it is unclear how many accounts are still active.

According to a report from Simon-Kucher & Partners, neobanks are challenged with profitability, with estimates that less than 5% of them are breaking even. A recent study on 25 of the largest neobanks found that only two of them attained profitability, while most earned less than $30 in revenue per customer annually.

Neobanks reportedly can tackle profitability by building partnerships in order to provide more services and increase the use of premium accounts.

In spite of Varo’s assurances, they will face major challenges without profits or investors, stated reports. Furthermore, if Varo’s plan for profitability is unsuccessful, the bank reportedly may attempt a new round of funding. The difficulties it faces may affect the credibility of neobanks around the world. 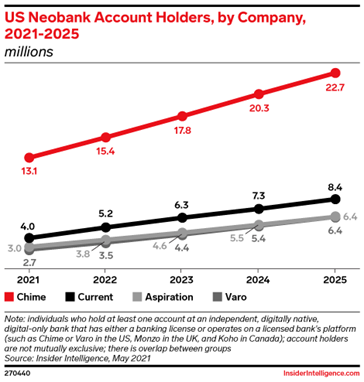 The Swiss government announced new financial rules for the five major banks in the country last Friday, requiring them to improve their liquidity positions in preparation for potential future crisis events such as the recent pandemic. The Swiss Federal Council confirmed that the rule aims to ensure that systemically important banks (SIBs) “hold sufficient liquidity to absorb liquidity shocks and cover their needs in the event of restructuring or liquidation.”

According to the report, Switzerland's five SIBs are UBS, Credit Suisse, Raiffeisen, PostFinance and Zuercher Kantonalbank. The requirements are to take effect on 1 July, 2022. Additionally, the five credit institutions have been given an 18-month transition period to meet their liquidity requirements.

The Federal Council stated that banks considered systemically important will need to maintain sufficient liquidity to manage a 90-day liquidity crisis, rather than the previous 30-day threshold. In addition, the Swiss Financial Market Supervisory Authority (FINMA) may impose institution-specific surcharges under the new rules.

Japan has announced a regulatory framework for stablecoins after cryptocurrencies gained worldwide attention due to the collapse of the TerraUSD token last month.

According to reports, the Japanese parliament passed a law last Friday clarifying the legal status of stablecoins, essentially defining them as digital money. Under the new law, stablecoins are required to be fixed in yen or other fiat currencies and will need to guarantee holders the right to redeem at face value. Additionally, stablecoins can only be issued by authorized banks, registered funds transfer agents and trust companies. The new law reportedly does not cover existing asset-backed stablecoins from foreign issuers such as Tether and their algorithm counterparts. Japanese cryptocurrency exchanges do not list stablecoins.

After the TerraUSD collapse costing billions of dollars, governments around the globe are aiming to build safeguards around stablecoin, a key part of the crypto space. According to data compiled by CoinGecko, the combined market value of such tokens is approximately US $161 billion, centred on Tether, Circles USD Coin and Binance USD.

The Financial Services Authority of Japan has announced that it will introduce regulations governing stablecoin issuers within the next few months. The new legal framework will come into effect within a year. As soon as the legal framework is in place, Mitsubishi UFJ Trust and Banking plans to issue its own stablecoin called ProgmatCoin. The Mitsubishi UFJ Financial Group stated that the tokens will be fully backed by the yen deposited in the escrow account and would guarantee redemption at par.

JPMorgan Chase is partnering with fintech OmniLatam to extend credit lines to small and medium-sized suppliers of large Latin American companies. With operations in Colombia and Chile and a recently added office in Brazil, OmniLatam provides receivable-backed credit and working capital lines to suppliers of JP Morgan’s large multinational companies in the region.

Ignacio Munoz De Cote, Head of Latin America Payments, JP Morgan, commented that suppliers will be able to take advantage of the low costs to discount their accounts receivable as interest rates continue to rise. Additionally, corporations can ensure that their suppliers are financially sound and minimize the pressure to raise prices.

Philippe Oliveira, Latam Trade and Working Capital Executive, JP Morgan, said the bank expects 100% of the loans offered through the partnership to remain on their balance sheets, while its current supply chain financial assets are expected to grow twice as much within the next three years.

OmniLatam plans to offer additional working capital products related to accounts receivable and accounts payable. In addition, they are also currently exploring other new products through the partnership.

Webinars to help you thrive in treasury