The evolution of open banking in India has progressed at an accelerated rate in the last few years, with 2021 making the largest progression. This movement was seen across government actions, the release of scalable open banking initiatives by banks, accelerated traction by many neobanks, funding, and expansion of several Banking-as-a-Service (BAAS) platforms.

Since BaaS is increasing in importance, the majority of larger institutions and growing smaller ones have fully operational departments for Banking-as-a-Service and digital banking with targets for revenue and customer involvement. Focus on hiring and training fully capable resources for this offering is a definite trend. Open banking is offering new opportunities to develop business models like B2B2B or B2B2C or B+B2C and other similar models instead of the simplified business models like B2C or B2B.

The Indian government continues to evolve the fintech ecosystem through government supported outlines like:

It is expected that the government will continue to support the ecosystem through these enterprises, which provide significant and outstanding potential for open banking to grow. If the Personal Data Protection Bill is enacted as anticipated, it will provide great clarity to the industry.

RBI has erected the Reserve Bank Innovation Hub, which will integrate with the ecosystem to remove the resistance in the market. Changed KYC policies by RBI in May 2021 will improve the digital onboarding process for MSME customers and minimize the resistance in Re-KYC. RBI also promotes robust communication around digital lending, open banking, tokenization (driving payments), and public credit registry (expected to launch in the near future), which is fostering decreased customer hazards while helping provide improved business structure to those involved.

Although there was almost a five-year delay, Account Aggregator Platform was launched in September 2021 with crucial initial members like ICICI Bank, HDFC Bank, Axis Bank, and Kotak Bank as Financial Information Providers (FIP) and Financial Information User (FIU). With many account combiners and providers of technology services aggressively promoting the ecosystem, it is expected that close to 99% of bank accounts will participate in the structure within the next year to year and a half. This will improve credit underwriting, cross-selling, wealth management, etc. to the FIU.

Yes Bank and RBL Bank initiated API Banking in India in 2017, but most substantial banks like ICICI Bank, Axis Bank, Kotak Bank and even smaller institutions like SBM, AU, SFB, and Equitas SFB have recognized all-encompassing API financial systems. It is expected that approximately ten additional banks will initiate API financial systems in the next year to year and a half. Several banks are constructing their open banking strategy while focused on the monetization of APIs with other business partners.

Below is a chart of the traditional versus open banking mindset: 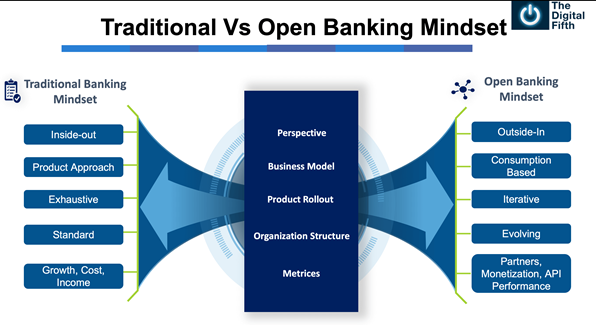 Razorpay, Niyopay, Myshubhlife, Chqbook, and others have evolved towards neobanking since there are minimal revenues in payments, and lending has minimal engagement. All of these institutions are extremely involved with their financial partners to increase usage over time.

Bigtech: Large technology companies like Google, Amazon, Flipkart, and Whatsapp initiated their voyage in banking in India through Wallet and UPI, which is the world’s largest real-time payment platform. These firms are now innovating with new services such as Google, which has partnered with Equitas Bank to open fixed deposits. In terms of cards and BNPL, closer partnerships between banks and bigtechs are also developing. Given bigtechs' drive in the market, it is the understanding that many fintech / open banking platforms will be adopted, speeding up the open banking ecosystem. There is also regulatory oversight to better clarify potential issues related to bigtechs.

Embedded finance: In addition to bigtechs, there have been several startups in the edtech, agritech, e-commerce, and mobility sectors that actively focused on embedded finance. Many of these stakeholders, such as Ola, Udaan and Stellapps, have already established a business model and are working closely with banks and NBFC to expand their business. This helps startups improve access to customer data, increase customer relationships, and develop new revenue streams. Treasury verticalization can be seen as traditional financial activities (payments, borrowings, insurance, investments) adapt to the needs of each industry.

Launch of several neobanks: Several neobanks were launched for individual customers such as NiyoX, Jupiter and Fi.Money. These were supported by a large campaign with TV advertising. They are starting to attract wealthy customers at a more decent pace than most banks in India. The retail bank's revenue model has minimal margins on payment transactions and banks cannot share deposit revenue with neobanks.

Retail banks and SMB neobanks are on a different path in India: Retail neobanks will move from a mostly “youth and mass-focused” segment to a more differentiated segment. Many of these new initiatives will be discontinued due to lack of differentiation and monetization options. Furthermore, there will be difficulty in competing with larger all-in-one apps (PayTM, PhonePe) and digital banks (Kotak, DBS, etc.). Large retail online banks raising large amounts of money will work well for leadership, more substantial access to funds, and the ability to sustain growth.

SME neobanks like Open will continue to grow and create niches like exporters, importers and industry-oriented companies such as steel and e-commerce traders. In addition, start-ups will also experience fierce competition from SME neobank initiatives such as HDFC Bank, ICICI Bank and SBI.

International neobank entry: Tide and Revolut have entered the Indian market and are working on partnerships with banks to bring a neobank to market. They are expected to bring international practices and cross-border functionalities to the market. According to Digital Bank, several international players are expected to enter the market within the next 12-18 months through the acquisition of neobanks in India or the implementation of Greenfield in India.

Long-term financing: Investors have invested heavily in neobanks such as Jupiter, Fi.Money, Bank Open, Flobiz, and Banking-as-a Service platforms such as Setu, Zeta, NIUM and Yap. Many neobanking players will become obsolete over the next three years, and banks will have the opportunity to acquire these players. Currently, some Indian banks are worth less than US$ 1 billion, and there are significant opportunities to improve them through acquisitions.

Talent and organization preparation: There is a clear shortage of talent with experience in digital banking and open banking, which impacts growth potential. In order to train internal personnel resources effectively, banks are working with experts in the digital space to implement on-going long-term processes. Organizations are re-evaluating and restructuring their organizational structures to work with open banking & digital business and brick & mortar business. Approximately 100,000 new roles will be opened across levels and industry to support change.

India's open banking ecosystem continues to thrive with active government and market support. With the introduction of Account Aggregators, the preparation of banks and NBFC APIs, the entry of several neobanks, and intensive financing, India has become a role model for open banking deployments around the world. Indians are currently utilizing the features of open banking (UPI / AEPS) on a daily basis and will probably adapt to new innovations without much friction according to The Digital Fifth.

It is forecasted that by 2027, approximately forty percent of digitally knowledgeable financial institutions will be through the embedded finance model (and neobanks) based on open banking with e-commerce giants, social media players, mobility leaders, food delivery platforms, fintech and other customer engagement platforms. In addition, about thirty percent of businesses will use digital platforms (competing with neobanks) such as mobile, internet banking and Whatsapp banking.