Russia is becoming an international financial pariah. The country’s full-scale attack on Ukraine is Europe’s first major war in decades and is making it a commercial outcast. A growing number of the world’s best-known companies are pulling out of Russia amid rising concerns about the humanitarian, economic and business effects surrounding the Russian invasion.

To assess the financial and business impact of the Russia-Ukraine conflict on treasury, Strategic Treasurer conducted a flash survey that was administered to treasurers March 1-3, 2022 (five to seven days into the Russian invasion). Forty-four percent of the respondents said they had already experienced a direct impact on their business operations or supply chains. 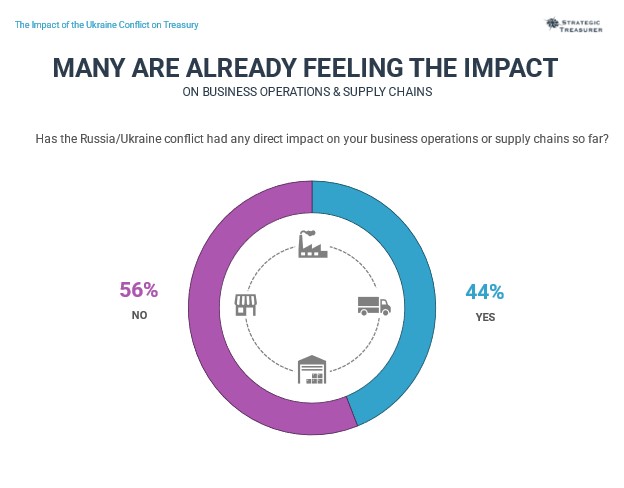 The Russian-Ukraine war has brought with it economic uncertainty and negative consequences for corporations worldwide. Fifty-four percent of respondents to the rapid survey are concerned that the conflict will impact global trade or supply chains. The COVID-19 pandemic exposed the dependencies and vulnerabilities in global supply chains, and the Russian invasion could throw another wrench into long-term supply chains and logistics. 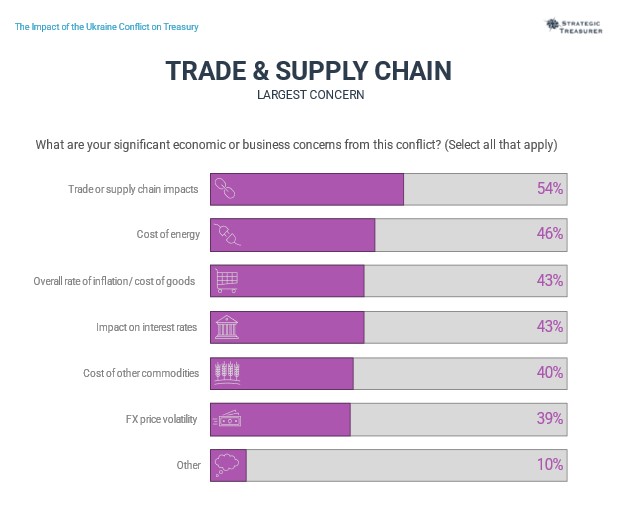 With the West imposing severe financial sanctions and stringent export controls to buckle the Russian economy, including shutting Russia out of SWIFT and freezing its oligarchs’ assets, Moscow’s exports to countries that depend upon Russia’s supply of commodities may be curbed or halted. That could also aggravate the ongoing supply crunch for chips, further disrupting the aerospace and auto supply chains.

The war-induced spike in oil prices is another cause of worry for treasurers. Forty-six percent of respondents are worried because of soaring energy costs driven by rising oil and natural gas prices. Forty-three percent of the survey’s respondents have concerns about spiralling inflation that will add to the cost of goods sold. In particular, food security and supply (grains - wheat, corn, barley, rye and maize, and sunflower seed products) is expected be hit hard, and that will drive food prices up. Ukraine was the leading corn supplier in 2021 and together with Russia accounts for nearly 29% of the global wheat export market. Disruptions in the flow of grains and sunflower seed exports can adversely affect companies in the European Union (EU), the Middle East and Africa that rely on Russian and Ukrainian vegetable oil and grain supplies.

Concerns around rising inflation include increases in electricity and heating costs, accentuated pain at the pump, dampened consumer spending and a squeeze on household income that will likely hurt economic growth.

Oil prices are closely linked to inflation, and inflation and interest rates are dependent on each other. An equal percentage of respondents (43%) are worried that rising oil prices may not only stoke the already burdensome inflation in the U.S., but also engender a number of major central banks to tighten monetary policy by raising interest rates at regular intervals this year. This can affect corporations’ cost of capital and drive down cash flow. Increases in borrowing costs can impact their profit margins and dissuade them from expanding because of their inability to access affordable capital.

As the crisis takes a turn for the worse, 40% of the flash survey’s respondents are concerned about rising prices of other commodities, namely palladium, nickel, copper, aluminium, platinum, titanium and steel. The geopolitical uncertainty, disruption of trade routes, inaccessibility of critical raw materials or halts in exports of Russian metals are causes of worry, as they have increased the volatility of commodity prices and can also affect sustained production of key technologies.

In these times of turmoil, foreign exchange price volatility was a cause of concern for 39% of the respondents. While the Russian ruble hit a new low, and the euro fell to its lowest level against the dollar since May 2020, investors dashed to safe assets (gold, bonds and dollar).

This propelled the dollar to the highest level since 2020, as corporate treasurers sought out dollar liquidity and dollar-denominated investments. However, for U.S. companies that generate revenue outside the U.S., a strong dollar can be a double-edged sword. According to a recent report in the Wall Street Journal, “When the dollar rises, revenues in other currencies lose value. Companies in the S&P 500 generate roughly 40% of their revenue from outside the U.S., FactSet data show.”

The “Other” constituents from the flash survey’s question regarding most significant concerns represented 10% of respondents who remain concerned about transaction monitoring, payment disruption, liquidity management, business travel and impacts of their work in the conflicted region.

With 55% of respondents expecting the conflict to spill beyond the borders of Ukraine, one thing is certain: this war will reverberate through the global financial system and will be felt everywhere.

The Russia-Ukraine conflict and implications for corporate treasury

The global economic impact of Russia’s invasion of Ukraine