As part of the Government’s continuing efforts to improve payment practices, legislation was introduced in April 2017 that requires the UK’s largest companies and Limited Liability Partnerships (LLPs) to report twice a year on payment metrics, including the average time taken to pay supplier invoices.

Late payment continues to be an issue for small and medium-sized businesses as it can affect their cash flow and their ability to trade. The Spring 2018 edition of the Lloyds Bank Working Capital Index highlighted that customer payment times remained a challenge with six times as many companies reporting longer payment times than reporting shorter. Lloyds Bank’s analysis shows that the average time to pay was 37 days, and 65% of companies pay longer than 30 days and despicably 9% pay after 60 days:

The report shows that:

Participating in the payment code

Performance of companies that participate in a payment code was a little better than those who do not participate: 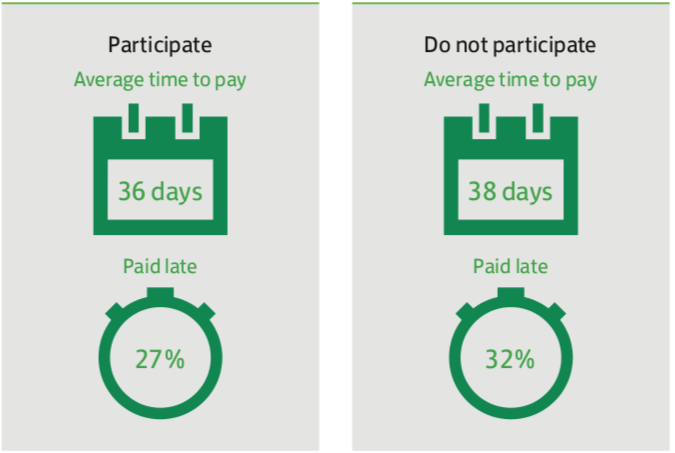 The report looks positive, however, Paul Christensen, CEO of London-based fintech, Previse, believes that it doesn’t show the very different fortunes of small suppliers compared to big suppliers. Previse’s research of over 4,000 suppliers (image attached) shows that on average, the smallest suppliers have to wait two months longer to get paid than the largest, see figure below:

Christensen commented that “This isn’t good enough. We need to realise that small suppliers don’t have the same bargaining power as their larger counterparts, nor the same access to early payment options like supply chain finance. We need solutions specifically targeted towards smaller suppliers, who need help the most.”

Reducing late payments is a joint effort that can benefit all