Risks of exploitation in the supply chain are increasing, while sustainable strategies have a core impact on revenue – companies must rethink their strategic priorities and finance must be involved.

In a digitally interconnected world, companies can no longer navigate by an ethical compass governed exclusively by cash flows and the bottom line. Reputational risk is fragile and can be shattered in just a few hours by media coverage of bad business practices, whether its environmental pollution, lax health & safety standards, unfair employment and payment policies or many other business practices that society just doesn't agree with.

Of course, such damage to reputation can be very financially damaging if customers go elsewhere or if there are legal or remedial costs. Several recent reports show that ethical considerations and sustainability are increasingly important to companies and are deeply intertwined with company performance.

Rising risk of exploitation in the supply chain

One important risk to many supply chains is modern-day human exploitation, which is rising in the European Union due to large numbers of refugees and migrants entering the EU from war-torn areas and impoverished states. The Modern Slavery Index (MSI), based on research by global risk consultancy Verisk Maplecroft, found that modern slavery risks have risen in nearly three-quarters of the 28 EU member states over the last year (see map below, source: Verisk Maplecroft). The EU countries most vulnerable to human exploitation (forced labour, servitude, trafficking) are Romania, Greece, Italy, Cyprus and Bulgaria. The situations in Romania and Italy are of particular concern but even the biggest Western economies, Germany and the UK, have seen deteriorating risks from modern-day human exploitation in a range of sectors, from agriculture to construction to domestic services. 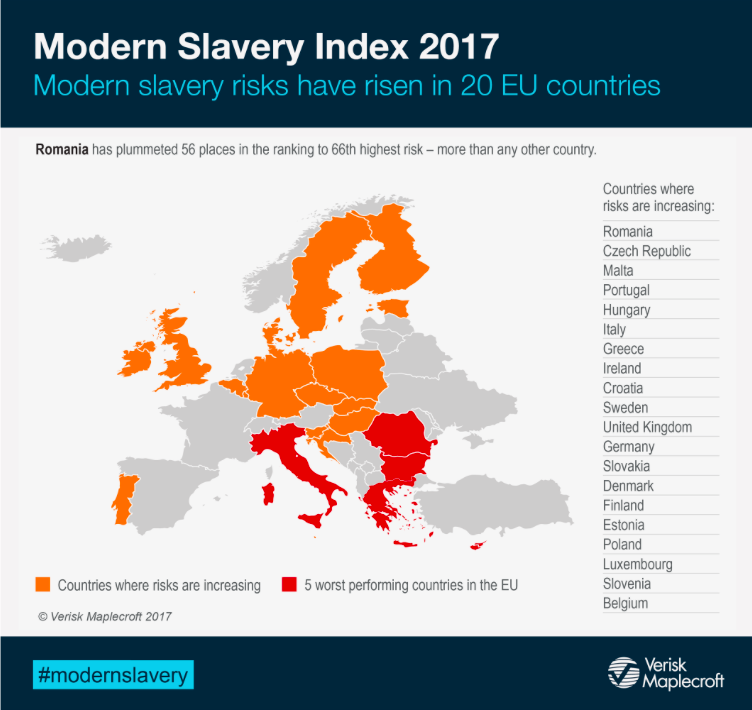 This is a huge and serious risk for companies in retail, food, hospitality, commodities, clothing, construction, distribution, property and many other industries. Some of the top sourcing countries are rated by the MSI as being an 'extreme risk' for exploitation, including Bangladesh, China, India, Indonesia, Malaysia, Myanmar, the Philippines and Thailand. Outside the EU, Turkey's risk is also seen as deteriorating rapidly.

The Accenture analysts have created what they call the Competitive Agility Index (CAI), which gives companies a higher score the more they engage with the three strategies of growth, profit and sustainability & trust. It suggests that companies with a higher score on the CAI have increased revenues and increased Ebitda - see the two graphs below (source: Accenture). It gives the example of an auto company that could stand to see its revenue rise by 3 per cent if its CAI score increases by 1 point (in other words, if it's able to demonstrate an increased commitment to all three key factors of growth, profit and sustainability & trust). 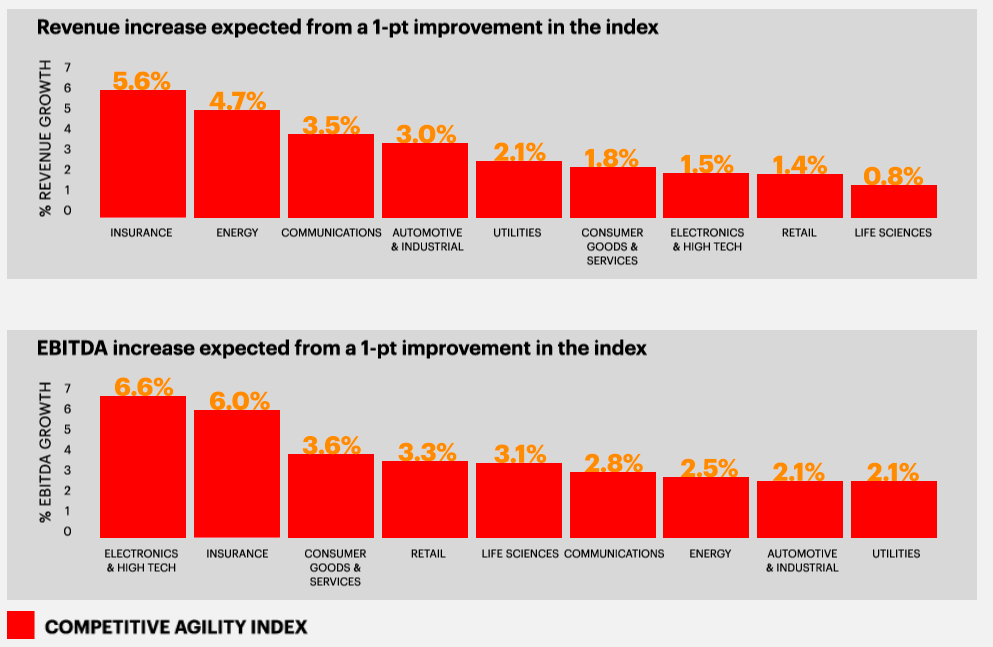 The Accenture study analyses how some companies are leading on all three strategy areas, making sustainability and trust a core part of their decisions on growth and profitability. Apple, Inditex, Colgate-Palmolive and BMW are named as some of those corporates that have stood out in all three sectors.

CTMfile take: The report by Verisk Maplecroft may seem peripheral to corporate treasury but it's probably something that treasurers should be quite aware of. Treasurers and CFOs don't make the decisions on where their companies source or manufacture products, or where they extend their supply chain. But it's clear that these decisions do come back to impact the company's risks and cash flows, which is why treasurers really do have a stake in supply chain risks and sustainability too.

It's crucial for corporates to play a part in achieving the $6.9 trillion annual investment needed to achieve the Paris Accord's climate goals. How can finance and treasury professionals play a role?

Is your approach to climate-related financial risk protective or proactive?

Could climate risk pose the next threat to global financial stability? This is a very possible scenario, according to a member of the High Level Expert Group on Sustainable Finance

Will 2017/18 be your year of sustainable finance? How will you contribute?

European Union to take the lead on climate change action, but what is your CFO and corporate treasurer doing about it?