The Russia-Ukraine conflict is expected to disrupt cross-border payment systems. This, in conjunction with technological advancements, may challenge the SWIFT network's dominance, according to an Economist Intelligence Unit (EIU) paper.

The EIU anticipates that domestic digital payment usage, which increased during the pandemic, will decelerate over the next five years, partly due to substantial base effects. Cross-border payments, which are still facilitated by the legacy and burdensome correspondent banking network, are under increasing pressure from customers to undergo a similar revolution.

SWIFT is reportedly facing criticism for its relative inflexibility and lack of transparency, as well as a decline in the number of correspondent banking relationships over the last decade. Russia was recently removed from the SWIFT network, which reports say could prompt it and other nations like China and India to intensify their development of SWIFT alternatives. However, the paper claims that setting up and scaling a full-fledged alternative bank-messaging system would be costly and time consuming. Furthermore, reports note that SWIFT will continue to be the dominant network as long as countries and lenders work together to improve it.

Moreover, government-supported efforts to integrate networks are said to interfere with cross-border payments. Efforts are currently underway in Asia to enable visitors to the continent to make purchases of goods and services by scanning QR codes (as shown in Table 1 below by EIU). Using emerging technologies like blockchain, APIs and tokenization will disrupt cross-border payments in addition to SWIFT, according to the EIU. Additional information on digital disruption may be found here at Beyond Borders: a new era for digital payments. How digital disruption is shaping the financial landscape. 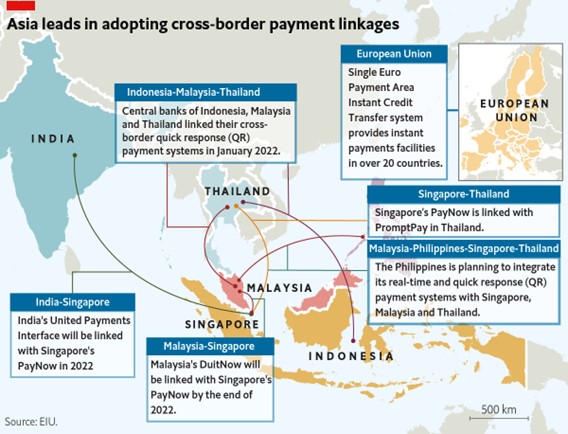 US bank regulators, the Federal Deposit Insurance Corp (FDIC) and the Federal Reserve Board (FRB), have ordered cryptocurrency firm Voyager Digital to cease ‘false and misleading’ claims that its customers' funds were protected by the government. In the letter dated 28 July, it was expressed that Voyager had misled customers by claiming that their funds with the company would be insured by the FDIC. The company is to remove all misleading statements within two business days of letter receipt. The regulators also stated that such action would not preclude them from taking further action against the firm in the future.

The company, which filed for bankruptcy earlier this month, made numerous statements suggesting that Voyager was FDIC-insured, that customers' funds invested in its cryptocurrency platform would be insured, and that the FDIC would protect clients from Voyager's failure, according to the regulators. However, the company only had a deposit account at Metropolitan Commercial Bank, and investors using the company's platform were not covered by the FDIC, according to the authorities.

Following the widespread instability in the cryptocurrency market, Voyager was one of several crypto companies that struggled. Voyager stated that it had between US $1 billion and US $10 billion in assets, as well as liabilities of the same magnitude, and over 100,000 creditors in its Chapter 11 bankruptcy filing earlier this month.

China's monetary authorities recently announced that it will expand cash-pooling services for multinational corporations in order to integrate domestic and foreign currency management on a larger scale. According to reports, China is now expanding a trial program that enables multinational corporations to use funds across borders, marking yet another step in the country's effort to internationalize the yuan.

The pilot, which began in Beijing and Shenzhen in 2021, enables selected companies to combine their cross-border yuan and multiple-currency cash pools into a single pool with the ability to easily purchase foreign currencies for international payments within certain limits. According to the People's Bank of China (PBOC) and the State Administration of Foreign Exchange (SAFE), six additional cities and provincial-level regions, as well as more multinational firms, have been included to help facilitate the use and management of cross-border capital. Global corporations have currently been provided permission to manage the domestic centralized collection and payment of funds for their entities abroad as part of the program's expanded framework.

Prior to the pilot program, many multinationals' yuan and multiple-currency cash pools were said to be managed separately by the PBOC and SAFE, resulting in inconvenient cross-border use of funds. The program is expected to make it easier for multinational corporations to use local and foreign currencies, effectively reducing exchange risks and financial costs for the firms, according to the PBOC and SAFE. Nearly US $50 billion in cross-border funds have reportedly been invested in the program since its inception.

According to the Wall Street Journal, Jack Ma, Executive Chairman, Alibaba Group, is preparing to relinquish control of Ant Group in order to distance the fintech giant from his Alibaba tech group in the face of regulatory pressure. Ma presently controls 50.52% of Ant’s shares, but the company is controlled by related entities. The journal noted that Ma is now looking to cede control by transferring voting rights to Ant executives including CEO Eric Jing. Ant is expected to be transformed into a financial holding company after Ma relinquishes control and will be regulated by the People's Bank of China.

Forbes' real-time tracker reported that Jack Ma's current real-time net worth is US $24.5 billion. This is a significant decrease from his net worth of around US $60 billion in early 2021, when Chinese authorities had just begun their crackdown on his tech business empire. After regulators attempted to halt Ma's proposed US $35 billion IPO for Ant Group, he has become more reclusive according to reports. The public listing's suspension was a part of a larger campaign against Chinese technology behemoths that were becoming dominating players in the field of digital payments. Since then, Beijing has tightened fintech regulations and mandated compliance from significant digital companies.

Ripple partners with FOMO Pay to assist with treasury management

Given the current trends in the cryptocurrency industry, Brooks Entwistle, Managing Director and Financial Technology Expert, Ripple Labs, commented that the absence of appropriate payment systems is a well-known problem in the Asia-Pacific area, stating that the new agreement would end these deficiencies.

This partnership agreement comes amid an ongoing legal battle between the crypto solution provider and the US Securities and Exchange Commission. However, the legal proceedings and current market conditions have not prevented Ripple from entering into partnership agreements with a number of companies. Similarly, the number of companies using ODL technology has increased dramatically. Ripple's ODL technology is currently used by the FlashFX, Novatti and iRemit.

The native cryptocurrency token of Ripple, XRP, typically acts as an intermediate exchange mechanism between different networks or coins. The value of XRP is currently USD 0.331688, with a 24-hour trading volume of $1,139,788,193, according to CoinMarketCap.

Mexican currency shocks traders who had bet on a collapse

According to recent reports, the Mexican peso is expected to outperform other emerging-market currencies in 2022. The Mexican peso, as reported by Bloomberg, has maintained its position when nearly all of its competitors have yielded to the dollar’s upward pressure, which has some analysts referring to it as the ‘super peso’. A tight fiscal policy and rising interest rates that have boosted the carry trade are said to be two of the main sources of this performance.

Expectations for a fundamental shift in global commerce in the years to come, which could result in a rise in foreign direct investment, is said to be yet another important element. At the end of 2021, investors predicted that the peso would be one of the worst performers, but now that Mexico's exports to the US are closing the gap with China, the currency market is being shaken.

Reports show that the peso has gained less than 1% to about 20.4 per dollar in a year in which the dollar has risen to its best annual run since 2015. Even as the dollar value of Mexican exports to the United States narrows, the gap with China remains significant. Furthermore, Mexico reported a record inflow of US $19.4 billion in foreign direct investment in the first quarter of 2022, up 5.8 percent from the same period last year after excluding one-time mergers. Andres Manuel Lopez Obrador, President of Mexico, predicts that US investment in Mexico will reach $40 billion between now and 2024. Additionally, in June 2022, the Inter-American Development Bank estimated that nearshoring could increase Mexico's annual exports by $35.3 billion. Reports show that Mexico exported $422 billion to the US during the last twelve months, $121 billion less than China. Four years ago, the gap was nearly $200 billion.

Foreign investors are reportedly drawn in by the peso's relatively low valuation. According to data compiled by the Bank for International Settlements (BIS), the currency has been on the weaker side of its 10- and 20-year averages since 2015. In contrast, China's trade-weighted exchange rate is now near seven-year highs.

While US recession risks are expected to weigh on the peso in the short term, the currency's resilient balance of payment flows outperforms regional peers, reports state. According to the bank, the peso is expected to rise by about 6% to 19.25 per dollar by the end of 2023.

According to recent reports, UK banks are demanding that big tech companies contribute to fraud victim compensation. While banks have been advocating for businesses in other industries to contribute to fraud reimbursement for quite some time, major UK banks including Lloyds, Barclays, TSB and Santander have now specifically targeted Facebook, Google and other tech and telecom behemoths for their role in online fraud. According to the banks, the “polluter pays” principle should compel these businesses to make payments into a joint account that compensates victims of online theft.

At present, banks in the UK that have signed and agreed to abide by the Lending Standards Board's code of conduct voluntarily reimburse victims. The "polluter pays" principle reportedly compels companies in other industries that aid in the facilitation of the fraud to contribute to the reimbursement.

Barclays reported that more than three-quarters of all online fraud occurs on social media sites, adding that tech companies involved in the facilitation of scams should be required to report data on scams identified on their platforms. However, banks argue that the primary goal should be to prevent fraud in the first place. According to Google and Meta (Facebook’s parent company), they do not run financial advertisements on their platforms in the UK unless they have been approved by the Financial Conduct Authority (FCA).

The UK trade group, UK Finance, revealed earlier this month that fraudulent activities accounted for £1.3 billion ($1.8 billion) in 2021, an increase of 39% from the previous year. Additionally, the UK introduced the Financial Services and Markets Bill in May 2022, which, if passed, would enable regulators to order banks to reimburse victims of authorized push payment (APP) fraud.

In the meantime, institutions such as PayPal and Zelle in the US are under criticism for refusing to reimburse victims of fraud. Numerous class-action lawsuits have also been filed against large financial institutions like Wells Fargo, Bank of America and Capital One for refusing to compensate the victims.

Santander, a banking multinational headquartered in Spain, announced plans to offer crypto trading to its clients in Brazil in the upcoming months, according to Mario Leao, CEO, Santander Brazil. More information about the initiative is set to follow in the company's next earnings release in mid-October.

Santander has reportedly made strides with cryptocurrency in Latin America this year. Reports indicate that it introduced loans for farmers in Argentina in March 2022 that were secured by tokenized commodities, in conjunction with Agrotoken, an Argentine agricultural commodities tokenization platform.

Recently, a number of non-crypto financial firms in Brazil declared or launched their operations in the cryptocurrency space. Brazilian fintech PicPay announced in July 2022 that it would start a cryptocurrency exchange and a Brazilian real-tied stablecoin backed in 2022. Mercado Libre, Latin America's largest e-commerce company by market value, reportedly began enabling users in Brazil to buy, sell and hold cryptocurrencies in December.

Nubank, the largest Brazilian digital bank by market capitalization, announced this week that its crypto trading platform had one million users just one month after it launched in June 2022.