Only a fifth of companies are actively making significant changes based on the OECD's Base Erosion and Profit Shifting (BEPS) recommendations, with focus mainly on transfer pricing and intercompany agreements, according to the Thomson Reuters 2017 Global BEPS Survey Report – dated November 2017.

The following chart describes how the companies surveyed are preparing for BEPS, with fewer than one in five actively making major changes to operations based on BEPS recommendations. A further 45 per cent are making minor updates but it might be of concern that more than a third – 37 per cent – are either doing nothing or taking a wait-and-see approach. 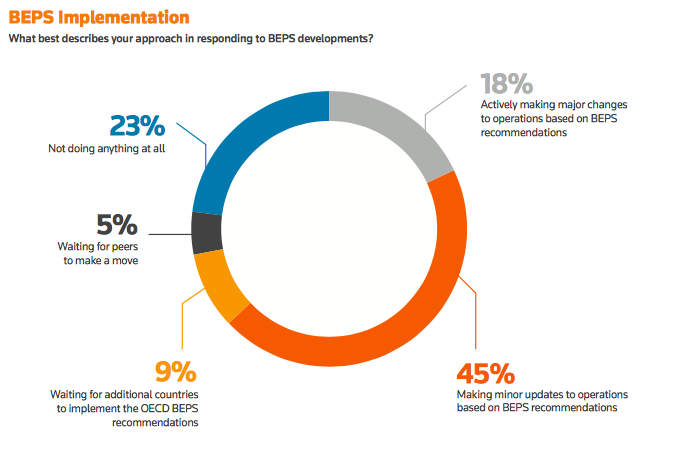 However, the survey results show that companies are now more confident about preparing for BEPS, even though some areas are causing problems. For example, 44 per cent of respondents said that they did not have a central database of material intercompany agreements (ICAs), which is an important document for BEPS compliance – in accordance with Action 13. Thomson Reuters's states: “BEPS Action 13 explicitly mentions the requirement of presenting a list of ICAs as part of Master File documentation. OECD guidance on the Local File includes providing copies of all material ICAs involving the local entity. Without a central repository for ICAs across the enterprise, compiling a list of ICAs for the Master File and copies of ICAs for the Local File can be challenging.”

The survey also shows that BEPS implementation requires involvement across different corporate departments but the CFO and finance department are most likely to be impacted according to 34 per cent of the respondents.

The top three changes companies are making to their business operations are: 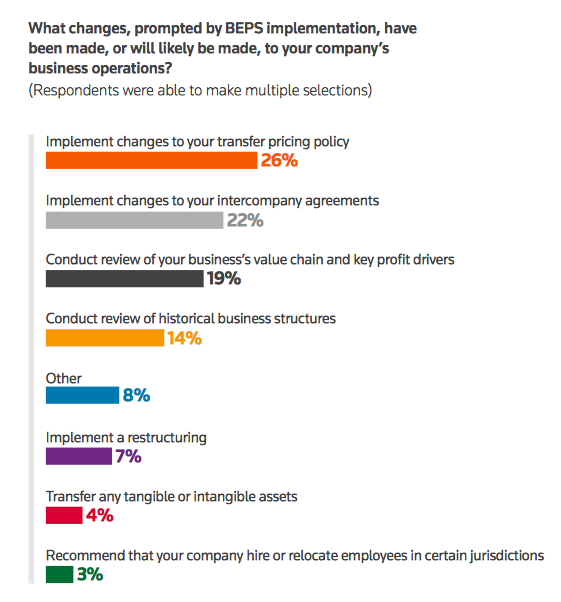 Difficulty keeping up with BEPS

The majority – 90 per cent – of respondents said that they were finding it slightly difficult to keep up with new BEPS developments and requirements in countries where they operate. The report stated: “Given the global reach of BEPS, without a holistic view of new developments, it becomes difficult for organizations to respond proactively to changing requirements, engage in strategic planning and ensure compliance with new laws and standards as they are passed by various countries.”

The survey report added that many MNCs are looking to technology to help solve “specific components of BEPS compliance, such as ICA management and staying current on new laws and standards.”

66% of corporates proactively preparing for BEPS