A lack of visibility of transactions, such as orders, invoices and payments, is the biggest challenge between procurement and finance for sixty per cent of organisations, according to a survey by PayStream.

It also found that about a third of respondents reported that they do not experience many issues between their procurement, AP and finance teams. But others said there are communication deficiencies, such as a lack of visibility and poor exchange of information. The report stated: “Common instances may be when purchasers file purchase orders or invoices and finance does not have visibility into spend activity, or when procurement is waiting on the status of an invoice payment by AP.” 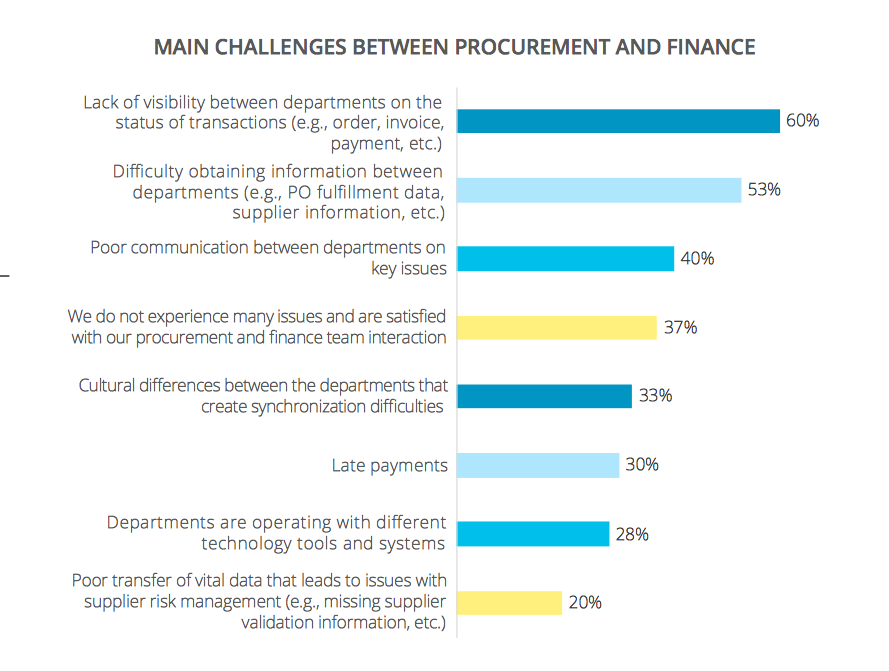 The report then goes on to list several ways to create synergy in the back office. Apart from the usual 'get executive buy-in' and 'improve communications and employee engagement', the PayStream Advisors report outlines some of the common mistakes that managers make when implementing a technology solution to manage transaction data workflows within a company. The mistakes often made by synergy change teams, as mentioned in the report, are as follow:

CTMfile take: Late payments are a major challenge for procurement and finance departments, according to 30 per cent of the survey's respondents, while a technology/systems mismatch also causes problems for 28 per cent. The full report can be downloaded here.

Large companies driven by own WC needs, not their suppliers

Future-proof your business with a sustainability programme