“Treasury is playing a greater role in stewarding a variety of business operations, many of which might not have been considered ‘core treasury’ functions in the past. But given their position as the steward of payments and liquidity and their ability to capture global data related to cash flows and financial positions, treasury is perfectly poised to provide greater strategic value within their company, and many teams are clearly adapting to this new role”, states the Treasury Intelligence Solutions (TIS) 2023 Treasury Priorities & Opportunities Survey.

The TIS survey ran throughout the course of Q3-Q4 2022 and captured responses of over 250 treasury and finance practitioners operating at companies of all sizes and industries. All these respondents work at companies with headquarters in the US, but most maintain an active international presence. 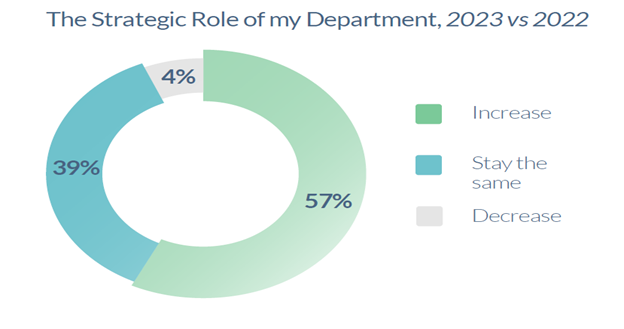 Fifty-seven percent of the survey respondents indicated that the strategic role of their treasury department would expand in 2023, while a mere 4% said it would decrease. When asked whether treasury was viewed as more operational or strategic by management, those polled were quite evenly split in their perspectives at 48% strategic and 52% operational.

As per the survey, “It appears that many treasury teams are being relied upon to execute and contribute towards more ‘strategic’ internal functions.” In fact, in both the 2022 and 2023 iterations of the TIS survey, respondents have reported that “Treasury teams are increasingly being viewed as strategic partners by colleagues and business leaders.”

In last year’s survey, 41% of respondents said that treasury played a role in strategy-related matters. In 2023, this number increased to 47%. In addition, “The number of treasury teams that were a key strategic partner to the CFO rose from 22% to 25%, and the percentage of teams that played a more occasional strategic role grew from 19% to 22%”, the survey noted.

Probing deeper into the growing strategic influence and importance of treasury, the TIS survey findings revealed that over 36% of respondents stated that treasury exerted direct control over areas like accounts payable (AP), accounts receivable (AR), data management and operational risk management. Furthermore, over 25% see treasury maintaining an indirect control over the same areas.

Based on the rising influence of treasury and the evolving nature of the treasury function, one of the action items that TIS experts recommend for treasury is that “Being both a strategic and operational contributor is more important than ever.” 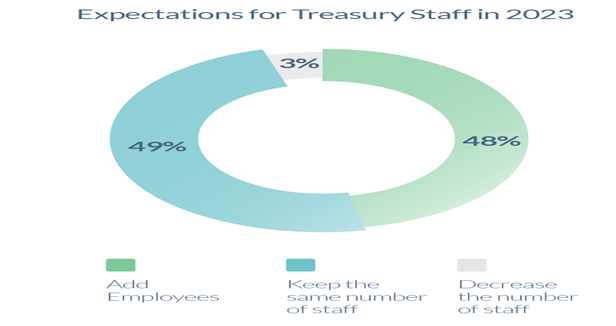 Despite slowing economic growth and uncertainty, it appears that treasury will add more staff to their department this year. In fact, while 48% of treasury and finance teams are expecting to hire additional employees in 2023, only 3% are likely to reduce their headcount. Similarly, 55% of respondents believe that the availability of professional development opportunities within their organization would increase in 2023, compared to just 5% who are of the opinion that such opportunities would diminish, the survey explains.

“It seems that treasury as a whole has fared well against the broader backdrop of budget cuts and staff reductions that have impacted the U.S. corporate environment. This is good news heading into what could ultimately be another tumultuous year. It also further supports the notion of treasury’s growing influence internally, as companies invest in the department to bolster their ability to analyze financial data, automate cash management and payment processes, and make more informed and accurate business decisions”, the survey further added.

“Over the past several years, industry data has highlighted how heavily treasury groups are focusing on new cash management, forecasting, and working capital projects. In 2023, these projects will continue to receive elevated attention and funding as finance groups look for ways to increase liquidity and cut costs”, remarked Craig Jeffery, managing partner at leading treasury consulting firm Strategic Treasurer, in the TIS survey report. ⃰

As a new segment of TIS’s research in 2023, one primary focal area was “Determining the key drivers for treasury groups when developing, analyzing, and refining their cash forecasts.” In particular, TIS wanted to “Learn which type of forecasting solutions were most popular across different company sizes and industries, as well as which time horizons were most preferred and what the main challenges and priorities were as forecasts were developed.”

The survey data showed that Treasury Management Systems (TMSs) were the preferred system of choice for 44% of all respondents, with 20% using an ERP and nearly 30% relying on Excel spreadsheets. Smaller companies are more likely to leverage Excel as their primary tool, but among mid-market and enterprise companies, the use of TMS and ERP solutions was more prevalent.

Regarding the frequency of forecasts, the most popular time horizon was weekly (38%), followed by monthly (27%) and daily (25%). Overall, “Smaller companies were only half as likely to conduct daily forecasts compared to larger firms, but 2x more likely to conduct quarterly forecasts. On the other hand, larger firms were more likely to conduct forecasts across numerous time periods including daily, weekly, and monthly. In aggregate, weekly forecasts were the most popular analysis period across all sizes and industries”, stated the survey report. In essence, given that larger companies typically have more capital and liquidity at their disposal, their need for more advanced and diverse forecast workflows is expected and understandable.

Finally, when it comes to the leading priority for improving their forecast operations, and in line with the broader digitalization shift that has been going on in treasury for some years, the survey respondents across all company sizes and industries indicated that adopting enhanced software to achieve greater forecast accuracy and automation was the top priority, as is the ongoing effort by companies still using Excel (mainly smaller companies) to migrate towards a “Software-based approach.”

The TIS survey data shows that treasury professionals are being relied upon by business leaders for an even mix of both strategic and operational activities. This demonstrates the growing importance and influence of treasury within their respective organizations. If treasury teams can adapt to the TIS recommendation of being both a strategic and operational contributor, keeping up with “Ongoing digitalization and automation within the industry”, and learning how to “Better leverage their data and insights to benefit not just their own department, but the company as a whole”, while also diversifying their “teams’ skillsets to be complementary in areas like cash management, data analytics, payments, investments, security, and technology”, it will not only mean a wider range of responsibilities, but will also result in becoming a significantly more value-added function.