Corporate treasurers actively want to experiment with new technologies and they want more payments integration, according to a survey, CFO Payment Pulse, by Ixaris Technologies. The research found that two-thirds of companies want payment integration with banking and accounting systems, and are also keen to experiment with new B2B technologies. It also found that one-fifth of companies are now using virtual cards.

They survey of 142 CFOs, treasurers and CPOs from around the world was done in association with Financial Director and Accountancy Age in February-June 2017. Some of the survey's key findings include:

Ixaris's Alex Mifsud said: “Finance teams at businesses across the board believe that automation and improved efficiencies are critical in creating value for the wider business and our research illustrates a willingness to experiment with new digital solutions and payment mechanisms.”

Treasury and CFO priorities for 2017

The following table, from the CFO Payment Pulse Survey 2017, shows that the top three business priorities for CFOs, CPOs and treasury in 2017 are: cost reduction, risk mitigation and improving competitiveness. But Ixaris's report argues that innovation is also a business priority for treasury: “... there is evidence that CFOs and their teams are becoming more interested in innovation and the role of new approaches in the treasury. Testing new products and services, and increasing outsourcing and collaboration with suppliers now outrank the desire to restructure existing relationships and supplier rationalisation.” 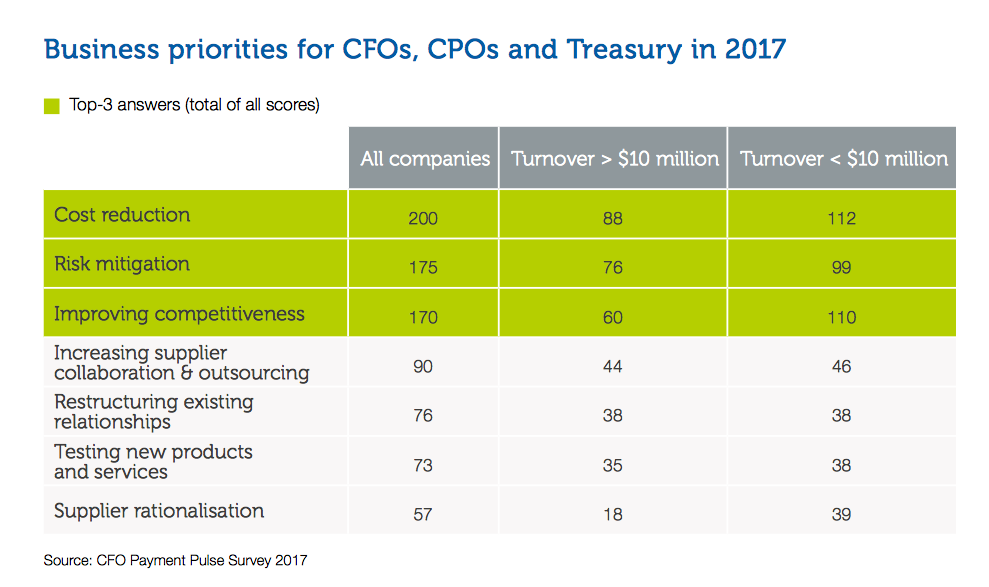