The Belgian pharmaceutical company UCB, which operates in 40 countries, have set up a payment factory using SunGard’s AvantGard payment solution Trax (see below), and combined this with a streamlined banking structure that allows payments to be made on behalf of most of their group companies. 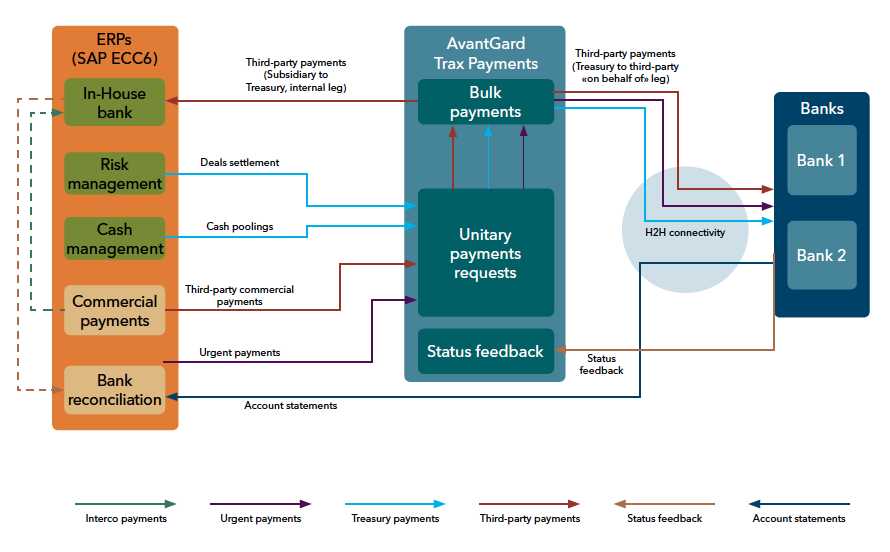 The new solution, run by a business process company with teams in India and Romania, replaced UCB’s country payment teams around the world. Initially, payments processes and the technology to support them were outsourced on an ‘as is’ basis. This meant that although personnel were physically located in the same location, reducing the administrative overhead for business units, processes were still diverse and separate banking systems still needed to be maintained. Consequently, the advantages of centralised payments were relatively limited.

Harmonizing the payment processes
UCB made the decision to harmonise its payment processes, technology and formats by implementing a payment factory. As a small treasury team, UCB decided to take a phased approach to implementation, starting first in Western Europe. The treasury team appointed a partner bank for European payments to replace the variety of banking relationships that were previously maintained. Other banks are to be appointed in the future to cover other regions.

Payments on behalf of
The aim of the payment factory was not only to enable treasury to centralize and harmonize its payments processing, but also to make payments on behalf of (POBO) group companies wherever appropriate to do so. This was to eliminate the need for business units to hold foreign currency accounts. By using a POBO model, only one account per currency would be required, from which payments would be made on behalf of all group companies, supported by an in-house bank to ensure the correct accounting postings. The bank would then provide information to the receiving entity as part of the remittance information to indicate the entity on whose behalf payment was made. While this is more difficult in some countries, such as France, POBO can greatly enhance the efficacy of the payment factory; the number of accounts can be reduced with far better visibility and control over cash. This approach was also acceptable to suppliers who would receive cash from a different entity from the one they invoiced. Local regulations in this respect have to be reviewed.

Payment factory progress
The implementation at UCB has progressed significantly with 90,000 payments each year already managed through the payment factory from Western Europe alone. ISO 20022-formatted files are produced in SAP, which is integrated seamlessly with AvantGard Trax. One standardized file per country is then routed to the payments bank through a host-to-host connection. Once confirmation of successful payment has been received from the bank (payments status reporting) in AvantGard Trax, the system automatically initiates a flat file reflecting the internal account entries and passes these through to SAP (with the creation of a payment order in the in-house cash module of SAP). Suppliers receive remittance information, which indicates the originating entity in a structured format so that payments received can be reconciled with outstanding invoices.

UCB is making further improvements to this process, focusing on the remittance information media that is additional information to that transmitted in the wire transfer.

Future development
UCB will now focus on rolling out the payment factory to other regions, including the United States, Central & Eastern Europe, Nordics and Asia. In some cases, the existing model will need to be adapted to regional requirements; for example, POBO is less common in the United States, but centralisation of payments still offers considerable value. As the number of payment banks increases, it is also likely that the company will move from a host-to-host connection to SWIFT to allow bank-neutral, multi-bank communication through a single channel. AvantGard Trax is an essential component of the current infrastructure, and also has a vital role in facilitating the global rollout of the payment factory. As files can be converted within the application, SAP does not need to be adapted to meet format requirements in each country, whilst still ensuring that files are transmitted to the bank in a standard format.

CTMfile take: An elegant solution in which the combination of the payment factory approach with payments of behalf of which enables the harmonisation payment processes and systems world-wide is the key.