For the first time in the UK ‘non-cash’ payments have exceeded those made with cash, reflecting the steady trend to use automated payment methods and debit cards rather than pay by notes and coins. However, cash remains the most popular payment method by volume, followed by the debit card, which accounted for 24% of all payments last year.

Cash is still king for consumers

Despite the shift, cash remains the most popular way to pay among consumers, who used it for more than half (52%) of all their transactions in 2014. The current forecast is that this figure will drop below 50% next year (2016), but there is no prediction for cash to disappear. 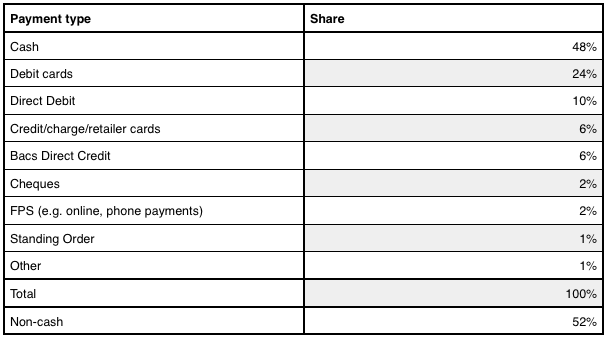 This continued consumer reliance on cash is also reflected in figures available from LINK, the UK’s cash machine network, which show that the number of cash machines across the country grew last year – reaching a new peak of 69,382.

The steady decline in the use of cash in the UK is shown in the table below. By 2024 the UK Payment Council predicts that cash transactions will be less than half of all transactions.

CTMfile take: Cash, as we wrote on 11 May, is on decline, but won’t disappear. It will for some types of consumer and business, never-the-less many segments will use it for ‘ever’.

Listen to this week’s most notable treasury news on this 27 minute podcast.