FX turnover totalled $5.1 trillion in April 2015, down from a record $5.7 trillion turnover six months ago.

TheCityUK’s estimates, based on individual surveys of foreign exchange activity released this week by central banks in the UK, US, Japan, Australia, Canada and Singapore, show that the UK’s share was well ahead of the next three largest trading centres – US (15%), Singapore (7%) and Japan (6%) – with London accounting for the bulk of the UK’s daily turnover, averaging $2,481bn. This growth was achieved against an 11% decline in global FX transactions, including spot transactions, outright forwards and FX swaps. 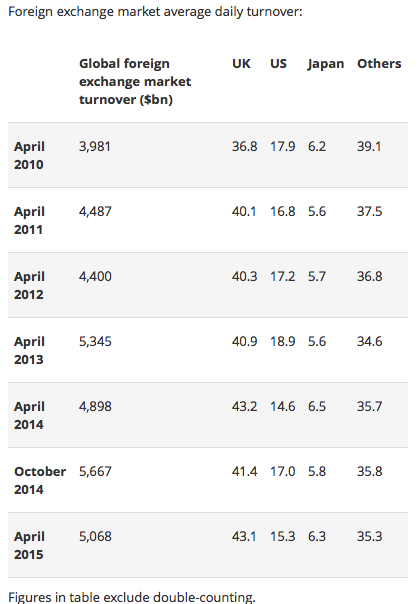 Gary Campkin, Director, International Strategy, TheCityUK, said: “The latest figures show that more than twice as many US dollars are traded on the UK’s foreign exchange market than in the US, and more than double the amount of euros are traded in the UK than in all the euro-area countries combined. The UK’s strong position stems from trading generated by prime brokerage, investment banking and hedge funds, three areas of activity that are important to its position as an international financial centre. London’s dominance further demonstrates its importance as an international foreign exchange hub and its position as Europe’s financial centre.”

According to Mr Campkin, despite the fall over the past six months, the volume of foreign exchange trading is on a long-term upward trend, tripling over the last 15 years.