The surging dollar might reflect the US economic power in the global economy, but for US corporations that do a good deal of business overseas or are dependent on international sales, the mighty dollar wiped billions from their second-quarter earnings this year, and it is expected to take a bite out of their third-quarter profits as well.

Nearly 40% of S&P 500 companies’ revenues are generated outside of the US, and about 58% of information technology company sales were sourced from abroad, according to the FactSet Earnings Insight of September 10, 2022. This means that companies in the S&P that garner a substantial portion of their revenues from foreign operations could experience additional earnings compression, albeit with a lag, as per FactSet.

The ICE US Dollar Index, a leading benchmark for the international value of the dollar and a gauge of the dollar’s strength against a basket of major rival currencies, rose 7.2% during the third quarter, marking its best quarterly performance in seven years. In fact, the FactSet data shows that the dollar index has climbed more than 18% since the start of the year through Wednesday of last week.

FactSet reports that analysts presently expect S&P 500 companies to see earnings growth of 2.4% this quarter, far less than the 9.9% gain (for the quarter) that was predicted on June 30. However, if earnings do come in at 2.4%, it would mark the weakest quarterly earnings performance since the third quarter of 2020, and the soaring dollar would be among the factors to blame for driving down corporate profits.

Looking ahead, “A sustained strengthening of the US dollar into 2023 could exacerbate the effects of a slowing global economy and high inflation for some US multinationals”, observes Fitch Ratings.

US companies and sectors with the largest foreign sales exposure

Typically, American companies that derive a lion’s share of their revenues from overseas are more vulnerable to exchange rate fluctuations.

According to Fitch, “Sectors relying on exports, such as chemicals, or having significant offshore production, such as technology and autos, generate a larger portion of revenue outside of the US, increasing their currency exposure and vulnerability to an appreciation of the U.S. dollar.”

“Multinationals in these high-exposure sectors are increasingly citing currency as a headwind to 2022 revenue and/or earnings”, Fitch explains. It adds that “Highly rated issuers should be resilient but leveraged entities may be vulnerable, especially if credit trends are already deteriorating.”

A list of the S&P 500 companies with the largest foreign sales exposure is appended below: 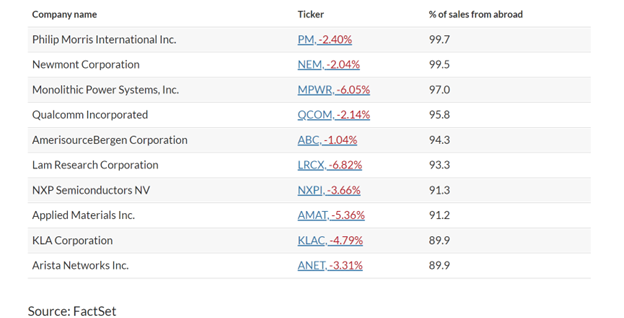 The companies listed above include companies from the S&P 500 consumer staples sector, the health-care sector, materials and the information technology sector. Semiconductor manufacturers or suppliers (such as Applied Materials) represent a majority of US companies on the list above.

The roaring dollar is especially bad news for the semiconductor industry, which finds much of its profits abroad. Assessing the dollar’s impact on a sectoral basis, big tech companies that – according to FactSet data – have the highest share of the S&P 500’s 11 sectors are citing the rising dollar as a drag on their earnings.

“Microsoft, which in July reported its slowest revenue growth since 2020, warned that it believes the stronger dollar will shave five percentage points off its revenue growth for the following quarter. Google parent Alphabet and Facebook parent Meta Platforms have also said currency fluctuations will likely hurt their results in the coming earnings season”, as has been reported in the Wall Street Journal earlier this month.

With the US Federal Reserve (Fed) expected to deliver another interest rate hike when they meet on November 1-2, the dollar may maintain its firm tone for some time.

“Factors contributing to the US dollar’s strength include rapidly rising interest rates and a flight to safety by global investors, given challenges around the world”, notes Fitch Ratings.

A strengthening dollar is working against US multinationals this earnings season and adding to their macro headwinds. For now, US corporations across various sectors that have significant international exposure may not be shielded from the foreign exchange headwinds, which are slated to have an outsized influence on their profits until the Fed tempers its interest rate increases and the current slowdown in the global economy is over.

US dollar rides high despite inflation spike – Industry roundup: 10 May