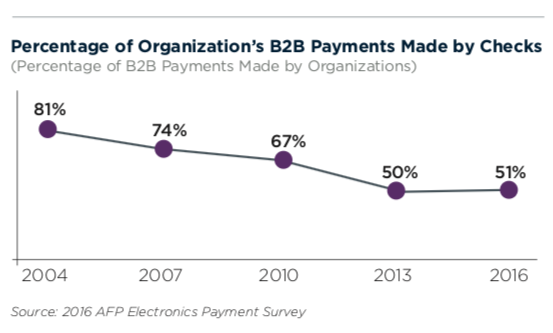 “The ACH Network is thriving, and has achieved a milestone of more than 2 billion payments in one month,” said Jane Larimer, chief operating officer of NACHA. “This impressive growth demonstrates that businesses and consumers are choosing to use ACH payments.”

At the current pace of growth, the ACH Network will add more than 1 billion new payments for the fourth consecutive year. Key drivers of the robust volume growth from August 2017 to August 2018 are:

Since 2004 in USA B2B payments by check have been steadily declining:

Clearly checks are still vitally important to the USA economy, and are experiencing a slight increase. Some corporate treasury departments are saying, according to the AFP Payments Guide, that, “Over the last year, we’ve seen some of the companies ordering more checks. And what we’re told is that they are so afraid of the cyberthreats that they would rather issue a check.”

CTMfile take: National payment habits are very slow to change. The USA is not unusual in this respect. Checks have hidden strengths that are not fully understood until banks try and eliminate them as UK banks found out. Also ACH will not be used for all B2B payments.

Checks are disappearing in the USA: SunGard’s AvantGard PayNetExchange had growth of 384% in Virtual

Listen to this week’s most notable treasury news on this 27 minute podcast.