Recent analysis by The Nilson Report shows that in 2014 the merchant card processing fees in the USA continued to rise.

Processing fees, including interchange paid by US merchants to handle that business, were $78.09 billion, up from $72.44 billion in 2013 when cards generated $4.768 trillion, according to the annual report on US merchant processing fees published by The Nilson Report, a newsletter covering the card and mobile payment industries: 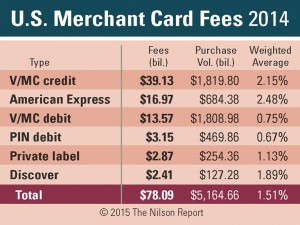 Most U.S. merchants will not make EMV deadline

A recent report from Javelin Strategy & Research, found that up to 75 percent of merchants in the United States will not be EMV compliant by the October 15th deadline. Many major retailers have already started implementing EMV terminals but smaller merchants are much further behind and many have no plans to catch up. Not only that, a survey commissioned by Intuit in late April found that only 42 percent of small businesses plan to make the switch to EMV.

In Europe, the transition to EMV and making Customer Present payments more secure didn’t occur overnight. Adoption in the US appears to be following a similar significant transition period where consumers and merchants make and take a mixture of EMV and traditional mag-stripe transactions. Fraudsters developing counterfeit cards will continue to do so following the upcoming EMV liability shift date, but, just like in Europe, they will begin targeting smaller merchants who do not have EMV compliant sales terminals. Overall, the growth of EMV in the United States will protect cardholder data and eliminate counterfeit card fraud at the point-of-sale, but it will take a while.