Public sector financial professionals in the US are dissatisfied with how their organisations are responding to digital trends and fewer than half have a clear and coherent digital strategy. The 2018 Digital Government Transformation Survey, by Deloitte and the National Association of State Auditors, Comptrollers and Treasurers (NASACT), shows that just 35 per cent of respondents think their organisation has adapted well to new digital technology, a drop of 29 percentage points from 64 per cent in the 2015 survey.

As the NASACT's executive director, R. Kinney Poynter, notes, “the survey reveals an eagerness for state financial professionals to use digital technologies on par with the private sector. Our members want to take advantage of emerging technologies, but clearly impediments to being more digital remain.”

The survey, conducted in May 2018, targeted auditors, comptrollers and treasurers working in government organisations in the US. It received a total of 71 responses from 41 states. However, it said there were insufficient responses from treasurers (only six) to “evaluate with confidence how digital, automation, and cognitive technologies are impacting their activities”. Nonetheless, treasurer responses to the survey suggest that reporting processes in the US public sector are automated to a moderate or large extent, although one in six respondents said their financial activities are automated to a “small extent” (see chart below). They also reported that cash management tends to be the activity most impacted by automation and cognitive technologies. 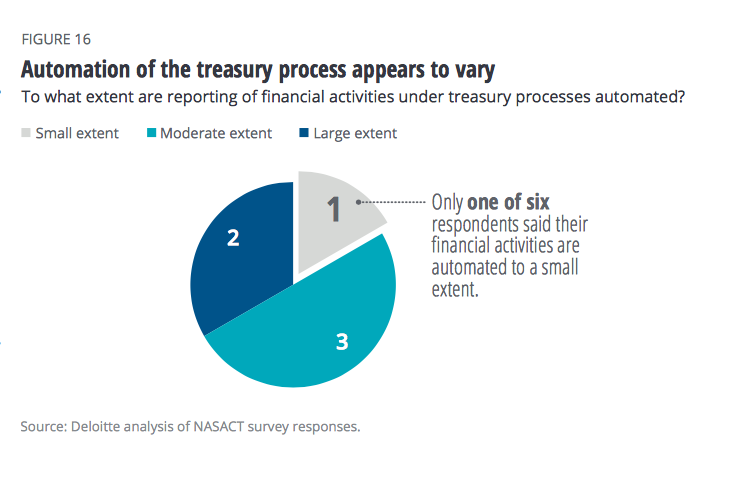 Each of the six treasury respondents are using a treasury management system (TMS), mostly for bank automation capabilities, automating payments and communicating with banks, and providing cash updates in real time. About half are using TMS for integration into other agency systems and for an integrated treasury approval process with other agencies.

Overall, the survey aimed to understand how state financial leaders are preparing for a more automated, digital future. It revealed the following three key themes:

With more funding, organizations must determine which technologies to invest in. Currently only 11 per cent of organizations reported a broad use of automation and cognitive technologies. Increasing these numbers will be critical as more audits are likely to be augmented by these technologies in the coming year.