Visa Inc. is planning a major change in their interchange (IC) fee structure to encourage payment card usage and reduce the amount of check usage. The plans have been confidentially circulated to the banks, but inevitably Bloomberg managed to get: 1) a copy and 2) comments from banks and retailers. Rates are lowered for some businesses and increased for others:

The IC cost to retailers has been going up year after year as the Nilson Report chart below shows:

The new rates will be rolled out in April and October 2020.

Examples of the new Visa published IC rates include:

As always, banks and payment networks can negotiate one-on-one deals for lower pricing.

Although Deutsche Bank researchers think, see, that payment cards are in long term decline, other researchers like The Nilson Report are predicting major growth as the chart below shows: 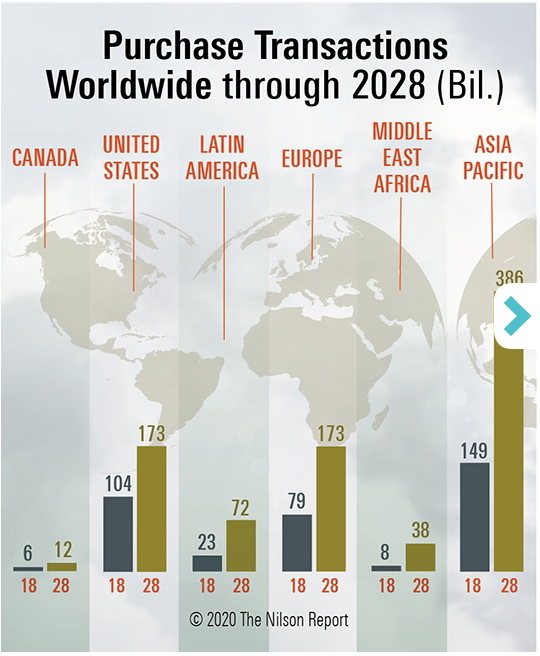 What is clear is that there is a battle between the different payment systems:

MasterCard had, according to Bloomberg news, no immediate comment on their plans for a new IC fee structure. But they, and the other card schemes, must be feeling the same pressures and the need to expand the usage of their cards too. So corporate treasurers can expect their costs from IC fees to remain the same or slightly increase. The banks are not going to give up their IC fee income which is now more than they make on credit card loans.

CTMfile take: Some variation of the new IC fee structure, that Visa USA has just introduced, will be rolled out by all the other payment card organisations worldwide. Corporate treasurers will complain to their banks, but payment card IC fees will just increase over the next 12 months unless corporate treasury departments can migrate payments to other cheaper forms of payment, such as payment through the local ACH.