Walgreens Boots Alliance, owner of retail pharmacy chains Walgreens in the US and Boots in the UK, abandoned its intended sale of Boots, which is the UK’s largest pharmacy chain. Since the end of 2021, Walgreens has reportedly been interested in selling Boots and its related No7 Beauty brand, with a formal review of its options in January 2022. However, it cancelled the sale on 26 June, claiming that the global financial market conditions had left potential buyers unable to borrow funds.

Many of the world's largest corporations' values have plummeted in 2022 as investors fear higher interest rates and rising inflation. High interest rates increase the cost of borrowing, making debt-funded acquisitions more challenging. Reliance Industries, owned by Indian billionaire Mukesh Ambani, and Apollo Global Management, a private equity firm based in the United States, made a joint £5 billion bid for Boots. Interest from Asda's owners, brothers Mohsin and Zuber Issa, never resulted in a formal bid, and US firms CVC and Bain Capital also dropped a potential bid. When Walgreens first put Boots up for sale, it was said to be looking for up to £10 billion in order to focus on its US businesses.

Despite receiving a significant amount of interest from potential buyers, Walgreens stated that “as a result of market instability severely impacting financing availability, no third party has been able to make an offer that adequately reflects the high potential value of Boots and No7 Beauty Company.”

Walgreens contended that the cancelled sale did not negatively affect Boots' or No7's business and claimed that both were performing well and expanding. It also declared that it would make investments in the businesses, which have outperformed expectations under adverse circumstances.

Rosalind Brewer, CEO, Walgreens, hinted that the business would take any potential acquisition proposals into consideration and remain open to all opportunities in order to maximize shareholder value. She continued by stating that "rapidly shifting and complex financial market conditions beyond our control" were the main causes for the company's decision to cancel the transaction.

According to the "Prime-Time for Real Time 2022" report published by ACI Worldwide in collaboration with GlobalData, a data and analytics company, and the Center for Economics and Business Research (Cebr), Malaysia has emerged as one of the world's most sophisticated real-time markets, providing real-time payments in a quick and distinct manner. Additionally, it has shown quick progression toward more complex and value-added services, rapid acceptance based on low-value transactions, and a government committed to promoting adoption. The government, central bank, national switch and industry worked cooperatively to modernize and complement the country's real-time payments infrastructure, which has contributed significantly to the development of the country.

The report includes all G20 countries except Russia, tracking real-time payments volumes and growth in 53 countries. It includes an economic impact study, which provides an all-inclusive view of the economic benefits of real-time payments for consumers, businesses and the broader economy in 30 countries. According to the chart below (table 1: ACI Worldwide report), Malaysia ranked as the world's fifth fastest-growing real-time market, with a CAGR of 26.9 percent.

In 2021, Malaysia had recorded 1.1 billion real-time payments transactions, saving businesses and consumers an estimated US $434 million in costs as well as $364 million in new economic production, or 1.11 percent of GDP, as illustrated in table 2: ACI Worldwide report below. Malaysia apparently implemented nationwide real-time payments extraordinarily quickly, in addition to the rapid adoption of banks and non-bank participants.

Malaysia's real-time developments began in December 2018 with the introduction of the DuitNow real-time payments system by PayNet, the country's core infrastructure provider and national payments network.

According to the analysis, real-time payments volume will expand at a CAGR of 26.9% from 2021 to 2026 as a result of rising consumer awareness, a preference for mobile payments, and the expanded DuitNow services and features.

Leslie Choo, ACI Worldwide's Managing Director of Asia-Pacific, stated that the region's next stage of evolution will be to build connections “to provide truly pan-regional real-time infrastructure, unlocking much greater economic benefit and opening up the formal financial sector to the region's vast unbanked and underbanked population." 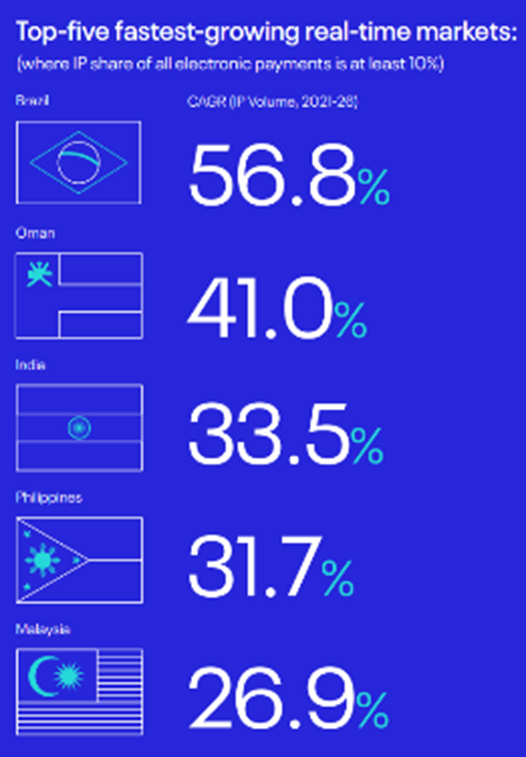 Investor interest in crypto still alive according to BAC

Bank of America stated that concerns about the "crypto winter" have not stopped investor interest in the blockchain technology sector. Additionally, the bank is reportedly optimistic about mainstream digital asset adoption, as revealed recently at a Web3 & Digital Assets Day Conference, where 160 attendees suggested that blockchain technology and digital assets are expected to remain part of the financial ecosystem.

According to BofA, some speakers mentioned that “the most innovative projects were built during previous downturns in the market, and that recent declines, while painful, are ‘likely healthy for the ecosystem's development over the long term.’"

Despite declining token prices and news reports claiming the sector is about to implode, client engagement is still rising, and attention is still being paid to the rapid advancement and disruptive nature of blockchain technology, according to the American Banker. Participants at the event reportedly emphasized that regulatory clarity is important for institutional and corporate collaboration, which could eventually accelerate real-world application and lead to mainstream adoption as consumer confidence in the sector grows.

According to the report, institutional investors and corporations are planning to enter the digital assets ecosystem but will hold off until a thorough regulatory framework is established. BofA commented that digital asset products may lure the first billion users, but improved links between the fiat and crypto sectors, as well as the establishment of a crypto-native ecosystem, will be critical to obtain more users in the blockchain technology landscape.

According to the most recent Deloitte research, the number of cross-border deals completed by companies in the Midlands (UK) have risen by 142% year-on-year. As stated by Deloitte's Cross Border Deals Radar, which tracks inbound and outbound transactions between investors and corporates in the Midlands and abroad, 58 transactions were completed between Q2 2021 and Q1 2022, up from just 24 the previous year. In the first quarter of 2022, Midlands companies reportedly completed eight acquisitions of foreign companies, trailing London (63), the South West (47) and the South East (17).

Five of the eight outbound agreements from the Midlands in the first quarter of 2022 derived from Nottinghamshire, setting the pace for the region. The three other transactions took place in Worcestershire and Leicestershire. In Q1 2022, Swedish and German companies led inbound investments into the Midlands, completing deals for five of the six Midlands companies purchased by foreign investors.

Nick Carr, Director, Deloitte, stated that "the volume of outbound cross-border deals continues to soar." Numerous organizations are reportedly expediting their digital transformation through acquisitions since there is funding available in the market and a desire to conduct transactions.

Given the number of variables at play in the UK and abroad, cross-border investment trends may expect fluctuations during the remainder of 2022. Additionally, Deloitte forecasted that inflation, higher interest rates, rising energy prices, and supply chain challenges are all expected to contribute to a decline in transaction activities this year.

The Bank of London has partnered with SAP Fioneer, a global provider of financial services software solutions and platforms, to transform and streamline global clearing and transaction banking.

The Bank of London is reportedly the second clearing bank authorized in the United Kingdom in the last 250 years, with its technology platform designed to serve as a key tenet for the future’s global economic infrastructure. The solution is said to combine the Bank of London's exclusive, patented technology with SAP Fioneer's hyper-scalable cloud-banking platform.

The companies claim that the integration between SAP Fioneer's Cloud for Banking platform (C4B) and the Bank of London's API will provide the UK with its first fully integrated real-time, frictionless compliance, clearance, settlement and payments solution for banks, fintechs and corporates. The solution, which is expected to go live in October 2022, will reportedly provide the market's fastest connection to payment schemes. Anthony Watson, Group Chief Executive & Founder, The Bank of London, stated that “now banks, fintechs and corporates gain significant advantages over their competitors, benefiting from near instant clearing, settlement and payments without liquidity constraints or financial intermediary friction in the flow of funds."

Rating, defining and protecting against the top five cyber threats keeping security experts up at night